Bones Hyland scored 19 and Will Barton added 14 for the Nuggets, who had dropped six straight. Jokic hadn’t played in the last four of those because of a wrist injury but finished with 15 rebounds and seven assists.

Jeff Green scored 12 for Denver, which shot 58% on the day that it was revealed Michael Porter Jr. will need back surgery. Porter has been limited to only nine games this season. 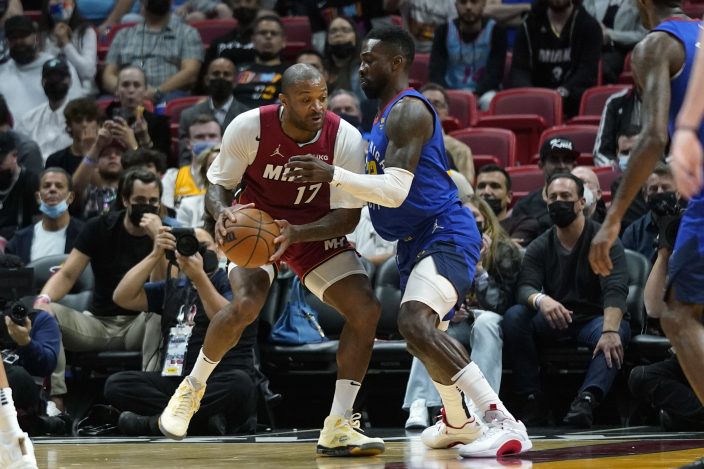 Miami Heat forward P.J. Tucker (17) goes up for a shot against Denver Nuggets forward Jeff Green (32) during the first half of an NBA basketball game, Monday, Nov. 29, 2021, in Miami. (AP PhotoWilfredo Lee)

Bam Adebayo finished with 24 points and 13 rebounds for Miami, which was without its two leading scorers — Jimmy Butler was out with a bruised tailbone, and Tyler Herro missed the game with what the Heat called general body soreness. Adebayo had 15 of his points in the third quarter.

Max Strus scored 19 points and Caleb Martin added 18 for the Heat, which got 17 points and 14 assists from Kyle Lowry.

It was the first meeting of the teams since the dustup between Jokic and Miami’s Markieff Morris on Nov. 8. Morris committed a hard take foul that the Nuggets felt was overzealous; Jokic responded with a shove into Morris’ back. Morris has now missed 11 games with what the Heat have described as a neck injury. 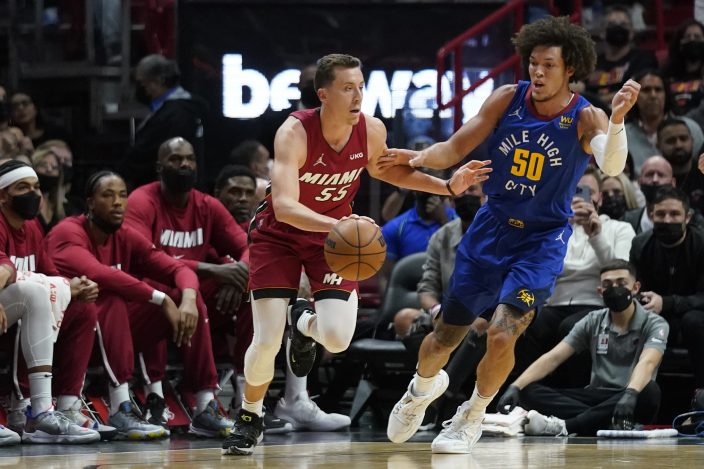 Jokic’s brothers — Strahinja and Nemanja — got into a Twitter jousting with Markieff Morris’ twin brother, Marcus Morris. The Jokic brothers, who have drawn attention for their reactions to certain plays in the past, were in Miami for Monday’s game, seated just behind the Denver bench.

“They’re coming down here because this is Miami and I know for a fact every year they’ve been able to come, non-COVID, they’ve been here,” Nuggets coach Michael Malone said. “And that’s not to cause trouble. That’s just to support their brother, which they always do.”

There was no fight in this one. It was only basketball — and fairly one-sided for most of the night. 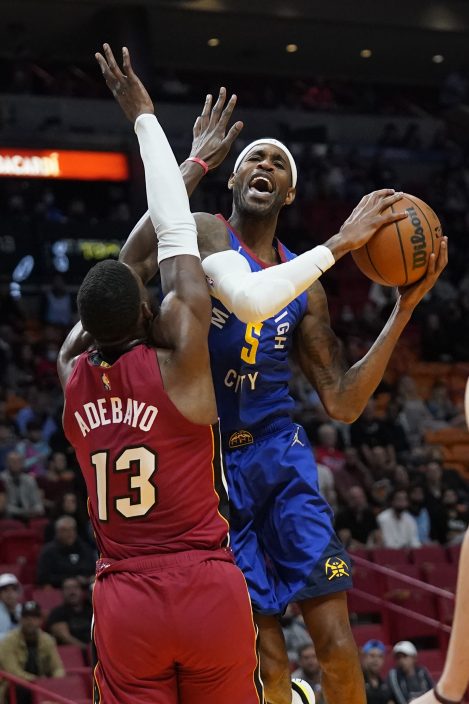 Denver Nuggets guard Will Barton (5) goes up to shoot against Miami Heat center Bam Adebayo (13) during the first half of an NBA basketball game, Monday, Nov. 29, 2021, in Miami. (AP PhotoWilfredo Lee)

There was a Heat flurry in the second quarter. Strus made a 3-pointer with 8:46 left in the half, getting Miami within 38-35 and capping a 10-3 run that took only 77 seconds.

And then the Heat went ice-cold — immediately.

Denver scored the next 12 points, Miami missed its next 10 shots, seven of those from 3-point range, and the Nuggets were rolling. The lead was up to 20 at halftime, the 63-43 Denver lead the biggest deficit that the Heat faced at intermission so far this season.

The only time Denver's lead dipped into single figures after halftime came when 0.9 seconds left, when Gabe Vincent made a 3-pointer on the game's final shot.

Nuggets: Malone used a challenge just 2:05 into the game, with good reason. It overturned an offensive foul, which would have been Will Barton’s second personal, and got Denver two points. ... The Nuggets are 4-0 when Hyland scores in double figures.

Heat: Miami is 0-4 in games where it trails by double digits at halftime, 13-4 in all other games. ... Adebayo’s high for a quarter is 19, set on Nov. 11 in the first quarter against the Los Angeles Clippers.

Heat forward P.J. Tucker, a fashion aficionado and shoe collector, paid tribute to fashion designer Virgil Abloh with his sneakers on Monday. “Virgil will always be with us,” Tucker scrawled on his game sneakers in honor of Abloh, whose death was announced Sunday.

Here’s a meteorological oddity for late November: About 90 minutes before game time, it was 68 degrees in Denver — one degree warmer than it was in typically balmy Miami. Things should be closer to normal in both cities by week’s end, with Saturday’s high in Miami expected to be in the low 80s and the high in Denver likely to hover in the low 50s.

US East Coast battens down the hatches ahead of blizzar ...