Karl-Anthony Towns scored 16 of his 32 points in the third quarter and Anthony Edwards added 21 as the Minnesota Timberwolves rallied for a 100-98 win against the Indiana Pacers on Monday night.

The Timberwolves trailed by 12 early in the third before Towns willed them back into the game. After checking out, Edwards finished the third in strong fashion to help send Minnesota to its seventh win in eight games.

D’Angelo Russell had 21 points and a season-high 11 assists for Minnesota. 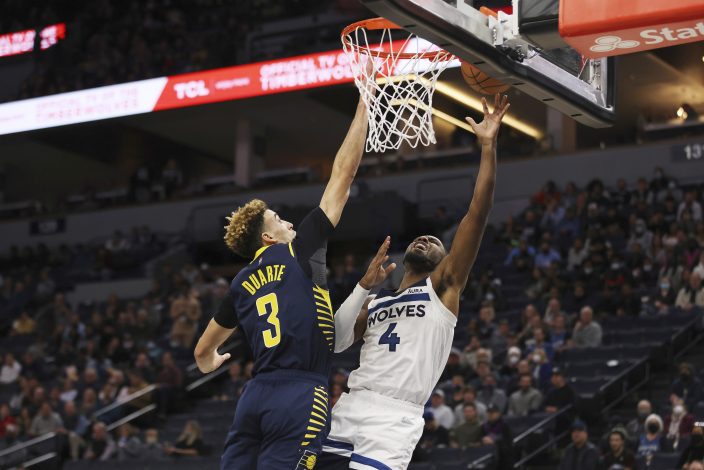 Minnesota Timberwolves guard Jaylen Nowell (4) goes up to the basket against Indiana Pacers guard Chris Duarte (3) during the first half of an NBA basketball game Monday, Nov. 29, 2021, in Minneapolis. (AP PhotoStacy Bengs)

Domantas Sabonis had 16 points, a career-high 25 rebounds and 10 assists for Indiana. Malcolm Brogdon added 25 points but the Pacers lost for the third time in four games.

With the Wolves clinging to a 94-91 lead, Towns fouled out with 1:34 remaining. Sabonis made three free throws to tie it, but Michael Beasley hit a corner 3-pointer with 51.5 seconds left.

Josh Okogie blocked a jumper from Caris Levert and Minnesota was able to close the game from the line. 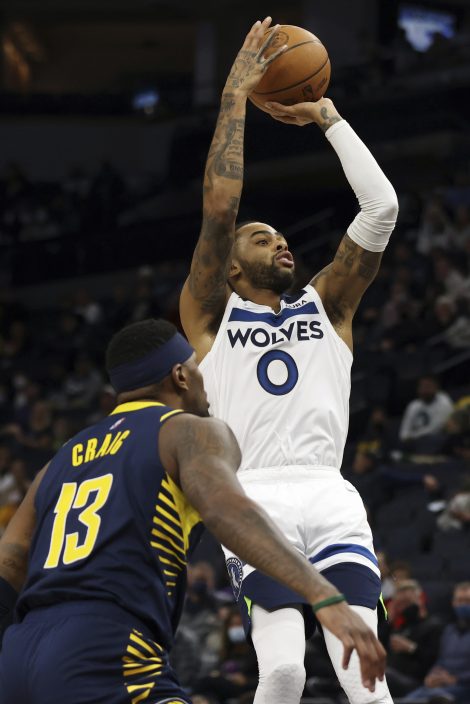 Frustration with the officials got the Wolves crowd into the game and seemed to energize Towns and the team. Indiana then became frustrated with the calls as Minnesota took control.

The Wolves went on a 22-9 run, with Towns scoring 15 points, to take the lead late in the third.

Edwards scored 11 points in the third. He brought the crowd to its feet with a soaring dunk on a breakaway and again when he finished an alley-oop on the break from Taurean Prince. 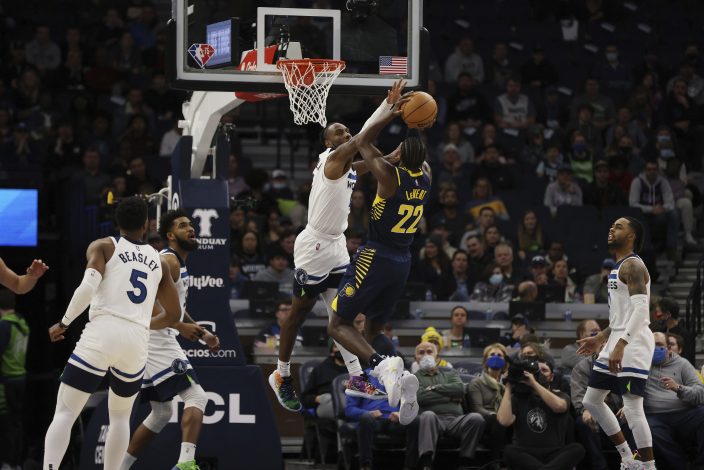 Indiana Pacers guard Caris LeVert (22) goes up to the basket against Minnesota Timberwolves guard Jaylen Nowell (4) during the first half of an NBA basketball game Monday, Nov. 29, 2021, in Minneapolis. (AP PhotoStacy Bengs)

On the ensuing possession, Edwards poked the ball away from Brogdon for a steal and hit a long 3-pointer on the other side to again take the lead after Indiana had come back.

Rookie guard Chris Duarte hit a 3 early in the fourth to bring the Pacers within one but then missed a layup on the next possession. He followed with a turnover and barked at the official, getting a technical foul.

While Sabonis tried to intervene and move Duarte away, the rookie kept complaining and was ejected with his second technical. A minute later during a Minnesota timeout, Indiana’s T.J. McConnell and coach Rick Carlisle were called for technical fouls. 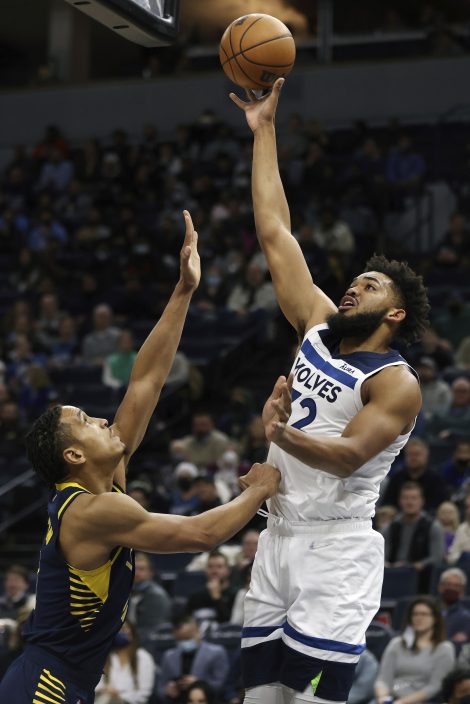 Pacers: C Myles Turner missed the game with a non-COVID-19 illness. McConnell joined the starting lineup as Indiana went small. He had eight points. … Duarte had 14 points off the bench before his ejection, going 3 of 5 from 3-point distance.

Timberwolves: Forwards Jarred Vanderbilt and Jaden McDaniels were held out with flu-like symptoms. Okogie started in place of Vanderbilt. G Patrick Beverley missed his third straight game with a left adductor strain. … Naz Reid had 13 points off the bench and made several key plays in the third-quarter run. … Minnesota has made going inside more of a focus in recent games and had 46 points in the paint, its third straight game with at least that many inside.