Jalen Ramsey had spent his entire football life within 600 miles of his native Nashville until he left the Jacksonville Jaguars for the West Coast just over two years ago, and the fresh start did him a world of good.

The versatile defensive back has become the best version of himself with the Los Angeles Rams, and he's looking forward to many years ahead in the current chapter of his career. He isn't looking back at the Jaguars, not even with the franchise coming to SoFi Stadium on Sunday for Ramsey's first career game against the team that drafted him fifth overall in 2016.

“It was part of my journey,” Ramsey said Thursday night after practice at the Rams’ training complex. “I’m grateful for my time there, but I’m happy to be here.” 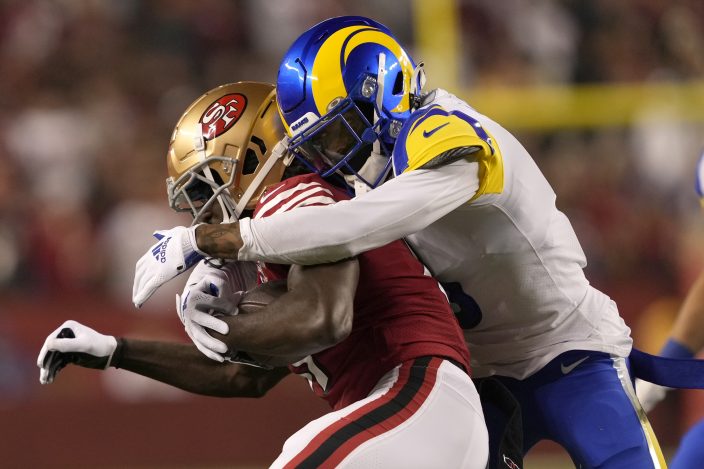 The 2020 All-Pro says he doesn't even think that much about his stormy times with the Jaguars — not after two years of largely sunny skies in Southern California.

“This isn’t really about me playing Jacksonville,” Ramsey said. “It’s another game, right? I don’t even really much know people there no more. They’ve got a whole new damn near organization. I only know probably like five people on the team, and I don’t even really be talking to them like that. I only talk to maybe two of them.”

The Jaguars actually have 17 players on their active roster who were acquired before Ramsey left in October 2019, but the organization's front office and coaching staff have undergone a thorough overhaul from the group that reached the AFC title game in January 2018. Ramsey is correct in saying he would hardly recognize much about the Jaguars, who have even made uniform changes. 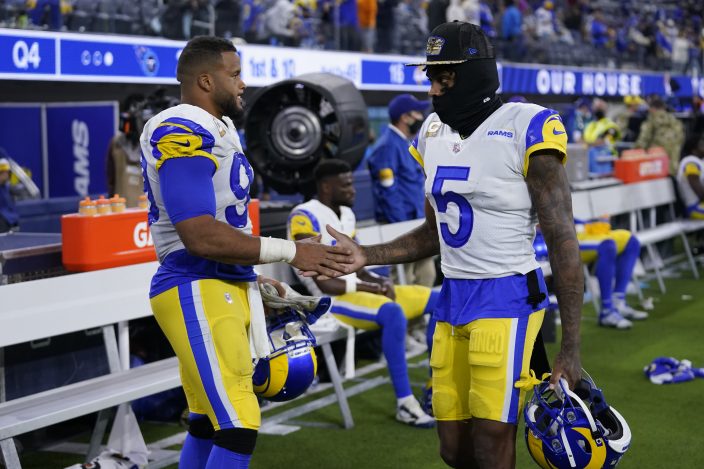 Although Ramsey didn't mention Tom Coughlin by name, it's clear he feels many of the negative parts of his Jacksonville experience can be traced to the football veteran who became the Jaguars' executive vice president of football operations the year after Ramsey was drafted. Coughlin was fired in December 2019 after clashing with players and running afoul of their union.

Ramsey was upset with the Jags when he wasn't offered a long-term deal after three seasons with the team, and he eventually had an argument on the sideline with coach Doug Marrone. A month later, he was traded to Los Angeles for two first-round picks and a fourth-rounder — a deal that has proven to be wildly one-sided in the Rams' favor.

Ramsey's disdain for Coughlin has not faded: He tweeted “Tried to tell y’all” after Coughlin's firing, and he was even more blunt last June on former Rams teammate Aqib Talib's podcast, saying: “We didn't like Tom Coughlin.”

Ramsey hinted at those trying times Thursday night while always looking ahead.

“I don’t like to compare Jacksonville to here,” Ramsey said. “I’m genuinely grateful for my time there and my whole experience. It was a part of my life that I needed, that I appreciated."

Ramsey is far from the only Jaguars player who had to leave to thrive. Pass rushers Dante Fowler and Yannick Ngakoue, running back Leonard Fournette, receiver Allen Robinson and safety Ronnie Harrison have all gone on from Jacksonville to bigger things, while the Jaguars have lost 30 of their last 35 games.

But none has succeeded like Ramsey, who earned two more Pro Bowl selections in Los Angeles while getting his second first-team All-Pro nod last year. He also got the contract extension he desired last year, agreeing to a five-year, $105 million deal that made him the highest-paid defensive back in NFL history.

Sean McVay knew the Rams were getting an elite cornerback, but he didn't anticipate the type of team leader Ramsey would become.

“I didn’t know much about him other than he had a charisma and a presence about himself,” McVay said. “Getting around him, just watching him really continue to just grow into a leader, mature as a person ... a special player, special person. He cares a lot about the people that he’s around. He goes out of his way to help, to share. He cares about his teammates, and he cares about winning. He’s demanding. He’s a great, elite competitor.”

Now in the first year of that extended deal, Ramsey seems headed toward more postseason honors while playing a do-everything role for the Rams' defense that allows him to showcase the full breadth of his skills.

Ramsey's three interceptions — a big number for a defensive back avoided by almost every quarterback — are one off his career high, while he is likely to surpass his career high for tackles (65) with 56 already this season.

Ramsey also has become a vocal team leader who isn't afraid to call out the defense's collective effort. After the Rams' 36-28 loss to Green Bay last weekend, Ramsey said the Rams “have guys that are way too good for us to be losing games like this and losing games in a row. We've just got to get it right.”

NOTES: WR Odell Beckham Jr. didn't participate in practice Thursday because of his hip injury. RB Darrell Henderson also sat out with a thigh injury. McVay will update their prognoses on Friday. ... CB David Long Jr. stayed away for the second straight day due to a non-COVID-19 illness.