The jolt Taysom Hill provided for the injury-riddled, reeling New Orleans Saints against Dallas on Thursday night dissolved in a slew of turnovers.

Starting at quarterback for the first time this season, Hill passed for 264 yards and ran for another 101, but he threw four interceptions, including three on consecutive fourth-quarter series as the Saints lost their fifth in a row for the first time since coach Sean Payton was hired in 2006.

Defensive tackle Carlos Watkins returned Hill’s last errant throw 29 yards for a touchdown to put the Cowboys up 27-10 with 2:52 left. They held on to win 27-17. 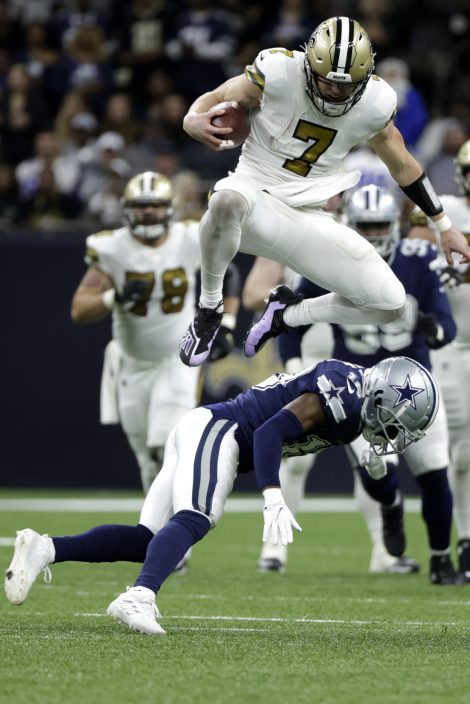 New Orleans played the Cowboys without star running back Alvin Kamara — out for the third consecutive game — and also was missing injured starting tackles Terron Armstead and Ryan Ramczyk along with guard Andrus Peat.

Payton turned to Hill in place of an ineffective Trevor Siemian after New Orleans lost 31-6 to Buffalo last Thursday in the Superdome, but the Saints fell to 0-5 since beating Tampa Bay and losing quarterback Jameis Winston for the season with a torn ACL on the same day. 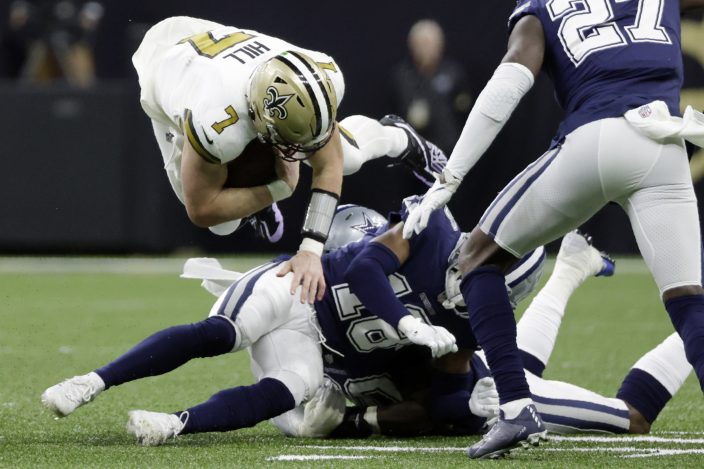 For three quarters, Hill gave the shorthanded Saints a chance.

He connected with Lil’Jordan Humphrey for a tying 24-yard touchdown in the first half. He ran four times for 42 yards on the Saints’ first series of the second half, setting up a field goal that cut the deficit to 13-10. And after New Orleans fell behind 20-10, he leaped over safety Damontae Kazee on a dazzling 23-yard keeper that put the Saints in scoring range again.

On the first play of the fourth quarter, though, he took a third-down sack that knocked New Orleans out of field goal range. Rolling out to his right with running back Ty Montgomery his number one option in the flat, Hill did not get rid of the ball before rookie linebacker Micah Parsons reached him.

“We were trying to run a naked (bootleg) with a run-pass option to the edge,” Hill said. “They zoned it off, so there was a guy sitting there with Ty. If I had to do it over again, I would have just thrown it at Ty’s feet.”

The interceptions followed in rapid succession. Hill's hand was hit as he released the first one. He underthrew a corner route on the second one. He never saw Watkins on the final one.

All his turnovers came after he hurt the middle finger on his throwing hand during the first half, requiring a splint for the rest of the game.

“It took a little getting used to,” Hill said. “Any time you put something else on a finger, the traction on the ball (is different), but it’s OK.”

Despite playing on a partially torn plantar fascia that sidelined him for the previous two games, Hill became the second Saints quarterback to run for 100 yards, joining Aaron Brooks. He had New Orleans on the verge of tying the score or going ahead late in the first half, but his pass to Kenny Stills on a corner route glanced off the receiver's hands and was picked off by safety Jayron Kearse at the Dallas 5.

Hill “played with a lot of heart, a lot of guts,” Payton said, adding that he thought Stills should have caught the pass that turned into Hill's first interception.

“We had the perfect coverage look. That’s unfortunate,” Payton said.

The Saints outgained the Cowboys 405-377, matched their 17 first downs and allowed them to convert only two of 13 third downs. The difference was the turnovers and one lapse on defense, when Tony Pollard raced 58 yards for a touchdown to give Dallas a 20-10 lead with 3:55 left in the third quarter.

“Giving up that big play, that’s crushing,” safety P.J. Williams said. “We didn’t get off blocks. We hold ourselves to a high standard, and that’s not it.”