If Thomas Bach or Adam Silver need some pointers on standing up for human rights instead of the bottom line, they should give a call to Steve Simon over at the women's tennis tour.

Finally, someone picked right over the almighty yuan.

Treading courageously into territory that Bach's International Olympic Committee and Silver's NBA steadfastly avoided — not to mention other sports organizations and countless corporate giants — the WTA suspended its tournaments in China because of concern for Grand Slam doubles champion Peng Shuai. 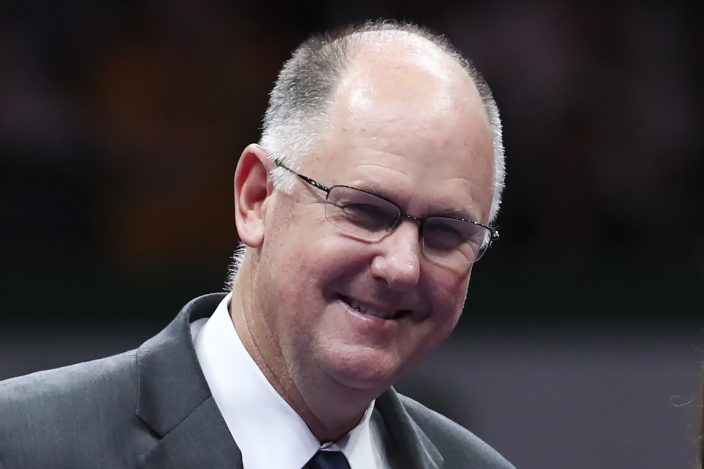 FILE - WTA CEO Steve Simon appears during a retirement ceremony for Martina Hingis in Singapore. The suspension of all WTA tournaments in China because of concerns about the safety of Peng Shuai, a Grand Slam doubles champion who accused a former government official there of sexual assault, could result in cancellations of those events beyond 2022, Simon told The Associated Press on Wednesday, Dec. 1, 2021. (AP PhotoYong Teck Lim, File)

Simon, the WTA's president and CEO, is all alone on Backbone Island, taking a stance that will undoubtedly deliver a huge financial blow to an organization that had been a major player in the lucrative Chinese market.

Simon conceded as much, stressing that he wasn't trying to influence the decisions made by other sports or governing bodies.

But his organization had to take a stand, he said, after Peng accused a former top Communist Party official of sexual assault.

“I’m not looking to send a message to any other sport bodies or influence their decisions or evaluate their decisions,” Simon said. “I think it goes beyond that, into obviously something very, very sensitive on a worldwide basis for women, in general. So, as the leading women’s sports organization, and having a direct effect on this, we’re focused on that.”

Peng's well-being has been a source of worldwide concern for the past month, with current and former players calling on the Chinese authorities to let her speak freely.

Her sexual assault allegations were quickly redacted from Chinese social media and she dropped out of public view, other than making a few carefully orchestrated appearances that appear to be nothing more than propaganda staged by an authoritarian regime.

With the Winter Olympics set to open in Beijing in two months, the IOC was best positioned to take on the Chinese.

But Bach wasn't about to mess with his billion-dollar boondoggle, so he's gladly played along with a pair of government-arranged video calls to Peng that were supposed to assuage the international outcry but instead make her sound more like a hostage.

Longtime IOC member Dick Pound weighed in as well, though he might as well have been auditioning to become a Chinese government spokesman when he said everyone in the organization believes Peng is “fine."

“These are people who have dealt with athletes and dealt with pressure,” Pound told CNN in an interview. "They can tell whether somebody is behaving under duress or not.

“Their unanimous conclusion was that she was fine. And she just asked that her privacy be respected for the time being.”

Of course, Bach and the IOC are merely mimicking the blueprint laid out by the NBA, which faced a backlash from China — its biggest foreign market — after former Houston Rockets general manager Daryl Morey sent out a tweet in 2019 supporting anti-government protesters in Hong Kong.

A leader in the fight for social justice in America, the NBA treaded far more cautiously with the Chinese.

The league called the uproar over Morey's tweet "regrettable” and spent the past two years trying to patch up a financial hit that Silver estimated at hundreds of million of dollars.

The WTA doesn't have nearly the financial clout of the IOC or the NBA, but it still chose to confront the Chinese over Peng's whereabouts.

The governing body says it will not back down until it gets to speak with Peng directly and the government agrees to a full and impartial investigation of her assault allegations.

That stance is one of the bravest in sports history, right up there with Muhammad Ali refusing induction during the Vietnam War, Tommie Smith and John Carlos raising a fist at the 1968 Summer Olympics, and Colin Kaepernick taking a knee for social justice.

“The WTA is on the right side of history in supporting our players,” tennis pioneer Billie Jean King wrote on Twitter. “This is another reason why women’s tennis is the leader in women’s sports.”

Simon was quick to point out this wasn't one person's decision. He said he had the full backing of the WTA board, players, tournaments and sponsors in a decision that could extend beyond 2022.

This is no small gesture, for sure. The WTA holds about 10 tournaments annually in China, including the season-ending Tour Finals, which are scheduled to be staged there for a decade.

Sadly, no one else is willing to follow — not even in the world of tennis.

The International Tennis Federation, which oversees Grand Slam tournaments and other events globally, and the CEO of the men’s ATP Tour both issued statements Thursday.

Neither made any mention of China or the WTA suspension.

The right side of history can be a lonely place.

Paul Newberry is a national sports columnist for The Associated Press. Write to him at pnewberry(at)ap.org or at https://twitter.com/pnewberry1963 and check out his work at https://apnews.com/search/paulnewberry

Biden enlists mayors as allies on infrastructure and ec ...

US, Colorado reach proposed settlement in 2015 mine spi ...

Colorado, the U.S. government and ...