A night of violence ignited when a man was shot and killed in an Arab town in northern Israel ended on Friday with police shooting and killing a man involved in an alleged car-ramming attack that wounded two officers, Israeli officials said.

The chaos in the town of Umm al-Fahm comes amid a wave of violent crime in Israel's Arab community that shows no sign of abating, despite far-reaching action announced in recent months by Israeli authorities.

Armed clashes among residents erupted after a man was shot and killed earlier on Thursday. Israeli police and firefighters raced to the town as gunfire rang out and buildings were set ablaze. 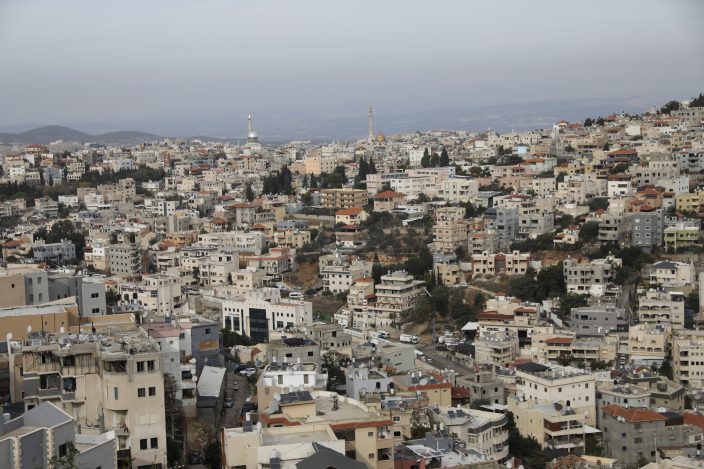 A general view of Umm el-Fahm, Israel, Friday, Dec. 3, 2021, after a man was shot dead by Israeli police in a car-ramming incident following a night of intense violence in the Arab populated Israeli town. (AP PhotoMahmoud Illean)

Early Friday, paramilitary Border Police opened fire on a vehicle speeding toward them, fatally shooting one man and wounding the other in the car, who was arrested after receiving medical treatment, Border Police said. They said the two officers suffered light to moderate wounds.

They said a gun and ammunition were found in the car, and that the two men were suspected of involvement in violent family disputes that have rocked Umm al-Fahm in recent months. Authorities said the car-ramming was not politically motivated.

Arab towns across Israel have seen a major escalation in violence in recent years driven by organized crime and family feuds. At least 117 Arabs have been killed in 2021, the highest number on record, according to the Abraham Initiatives, which promotes Jewish-Arab coexistence. The crime rate among Arabs far exceeds their 20% share of the population. Police examine a car in Umm el-Fahm, Israel, Friday, Dec. 3, 2021, after a man was shot dead by Israeli police in a car-ramming incident, following a night of intense violence in the Arab populated Israeli town. (AP PhotoMahmoud Illean)

Arab citizens of Israel have the right to vote, most speak fluent Hebrew, and they have a large presence in the country's universities and medical profession. But they face widespread discrimination, especially with housing.

They have close familial ties to Palestinians in the occupied West Bank and Gaza, and largely identify with their cause, leading many Jewish Israelis to view them with suspicion. Jewish-Arab violence erupted across Israel during the Gaza war in May.

Arab activists have long accused police of ignoring crime in their communities. Israeli officials have touted a number of initiatives in recent years, including larger budgets for law enforcement in Arab communities, but police say local leaders could do more to help them. A general view of Umm el-Fahm, Israel, Friday, Dec. 3, 2021, after a man was shot dead by Israeli police in a car-ramming incident following a night of intense violence in an Arab populated Israeli town. (AP PhotoMahmoud Illean)

Israel's current government pledged major action against crime in Arab communities in August as it announced a wave of arrests. That was a central demand of a small party that made history this year by being the first Arab faction to join a ruling coalition.

Ex-leader Poroshenko to go to Ukraine to face charges