Over the past 100 years, around 110 people have owned controlling portions of NFL teams. Of that select group, all but two have been white.

This basic head count might offer the simplest explanation for how, even with rules in place for nearly two decades that are designed to improve diversity, the league has struggled to build a pipeline for bringing Blacks and other minorities into coaching and front-office positions.

The lead investigator for the latest NFL Inclusion and Diversity Report gives a nod to the less-than-satisfying nature of the numbers in that report by leading off his opening message with the reminder: “Progress is a process.” FILE -Washington Redskins president Bruce Allen stands on the sidelines prior to an NFL football game between the Minnesota Vikings and Washington Redskins, Sunday, Nov. 12, 2017, in Landover, Md. Over the past 100 years, around 110 men and a handful of women have owned controlling portions of NFL teams. Of that select group, all but two have been white. (AP PhotoMark Tenally, File)

In 2021, the process produced these statistics: Black players make up about 70% of team rosters but the league has only three Black head coaches, while it had eight in 2011; Black coaches who fail in their first try in the jobs get inordinately fewer second and third chances than their white counterparts; the NFL this year recalibrated its much-celebrated Rooney Rule, which ensures minority candidates for front-office positions are identified and interviewed, to make sure teams talk to at least two such candidates for front-office positions and coordinator roles.

Academics who study the subject say the latest set of underwhelming numbers, along with the latest set of changes implemented in an attempt to improve them, are in line with the century-long history of a league that has been controlled by rich white men.

“To understand this problem, you have to look at it from a broader macro-historical lens,” said John Singer, who teaches courses on diversity and social justice in sports at Texas A&M. “It goes back to an old-boys network. It's an informal system in which wealthy men, particularly wealthy white men with social and economic backgrounds, help each other out.” 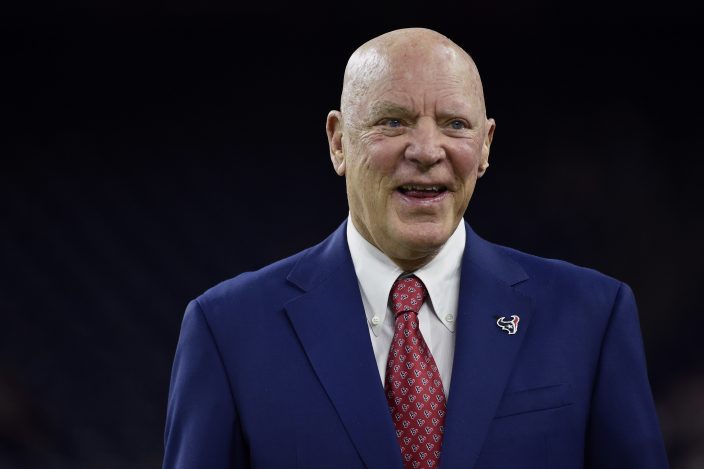 FILE - Houston Texans owner Bob McNair watches from the sidelines before an NFL football game against the Cincinnati Bengals Saturday, Dec. 24, 2016, in Houston. Over the past 100 years, around 110 men and a handful of women have owned controlling portions of NFL teams. Of that select group, all but two have been white. (AP PhotoEric Christian Smith, File)

In many ways, the academics say, the arc of diversity and inclusion in the NFL mirrors that in America itself. It's more complex than simply saying owners have long been more comfortable hiring people who looked and talked like them, though that certainly could be one element in play in a league that didn't hire a single Black head coach between Fritz Pollard in the 1920s and Art Shell in 1989.

“There's also a matter of who they think is most marketable, who resonates with their fan base,” said Anthony Weems, an a ssistant professor at Florida International University who wrote a dissertation on NFL owners and the social structure they created over a century.

“Over time, a lot of these owners are the same people, or the teams got passed down in the family. So it's almost like, 'Why would things have changed if the actual players in those positions haven't changed?'” Weems said.

The professors agree that it was no surprise earlier this year to see the racist emails that surfaced between Jon Grude n and former Washington executive Bruce Allen. Also not shocking, but far less spotlighted, was the scenario that played out in 2017 when Texans owner Bob McNair said "We can't have the inmates running the prison.”

McNair apologized and said he hadn't been speaking about the players. When he died in 2018, ownership of the team passed to his wife.

“There was backlash for sure, but why are they running Gruden out of a job when they allowed McNair to operate just fine and he passed the team down?” Weems said. “It's indicative of a larger culture.”

Jaguars owner Shad Khan, one of the league's two minority owners, said he was taken aback when he tried to buy a controlling stake in the Rams in 2010.

“I had met some people at that time and the apology that went around, the conjecture was, ‘You will never get approved because you’re not white,'” he said.

But he said those thoughts didn't match up with the reality. He moved on from the Rams and ended up buying the Jaguars in 2011, and paints a much more optimistic picture about NFL ownerships' relation to race.

“I think the league is at the forefront and they’re going to be doing more,” Khan said. "And my being in the middle, yes, I’ve seen a change.”

In a short essay that accompanied the latest diversity and inclusion report, lead investigator C. Keith Harrison writes about the academic topic of attribution bias, which, he explains, are errors made when trying to explain why people make decisions they make. It undercuts the idea that, for instance, all decisions made by a largely white group of owners might be based solely on race.

Still, the results remain the same, and Harrison points to other academic studies that conclude the impact of biased behavior does add up over time.

“In the context of the NFL, African Americans and other human beings of color pay their dues, and when it appears to be their turn it is often a white coach hired again. And again. And again," he writes.

He used the example of Urban Meyer's attempt to hire Chris Doyle as an assistant for the Jaguars as a prime example.

Doyle's hiring was squelched after accusations surfaced about his racist remarks and bullying of players during his 22 years at the University of Iowa.

That episode illustrated what many people see as one core problem in the NFL's diversity issue: A century's worth of white owners have built a system in which white coaches and leaders get far more second and third chances, while Black coaches are harder to find and don't have as many chances to fail. For instance, since 1963, 15 white coaches have been given a third head-coaching job, compared to zero coaches of color. (The report says Tom Flores was the lone coach to be afforded a third chance, but authors did not respond to The Associated Press when it asked what the third job was. Flores coached the Raiders and Seahawks.)

Cyrus Mehri, who co-founded the Fritz Pollard Alliance, which, according to its website, “exists to champion diversity in the National Football League,” said the league office is not to blame for the systemic diversity issues in the NFL.

“It's the owners,” Mehri said, in a quote embedded in the diversity and inclusion report. "We have spectacular candidates, and we still have decision making (among owners) that’s irrational."

John Solow, an Iowa professor who co-wrote a paper on the Rooney Rule in 2011, said that in the universe the owners have created, it can be argued that it's hard to tell if Black assistant coaches are being discriminated against because, compared to whites in the same positions, there haven't been enough of them over the years to do a truly scientific study on the issue.

For instance, between 2012-2021, whites were hired for 168 of the 219 (76%) open coordinator positions, which are considered the top launching pads for head-coaching jobs. That almost mirrors the hiring pattern for head coaches: Whites have been tabbed for 51 of the 62 openings (82%) since 2012.