BETTING LINE: Raiders by 2 1/2, according to FanDuel SportsBook. 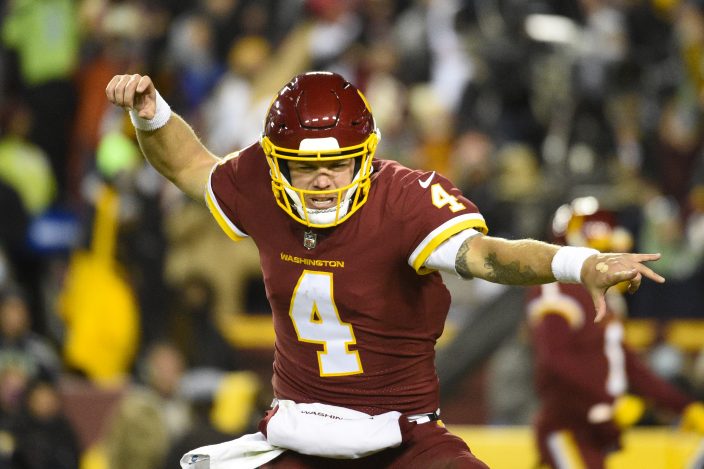 Washington Football Team quarterback Taylor Heinicke (4) celebrating a touchdown against the Seattle Seahawks during the second half of an NFL football game, Monday, Nov. 29, 2021, in Landover, Md. (AP PhotoMark Tenally) 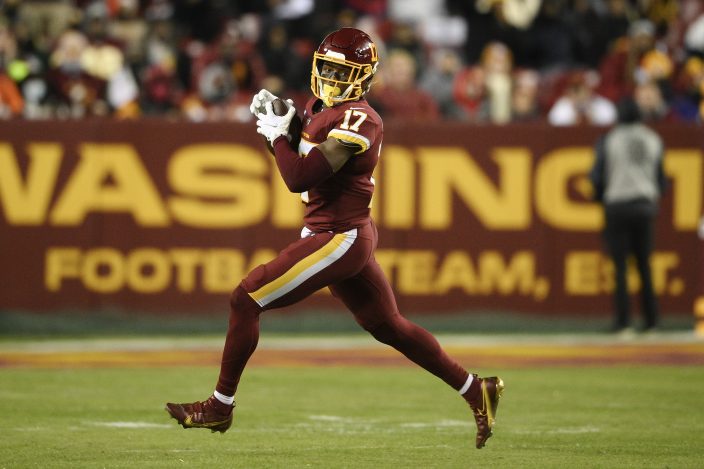 Washington Football Team wide receiver Terry McLaurin (17) runs with the ball against the Seattle Seahawks during the second half of an NFL football game, Monday, Nov. 29, 2021, in Landover, Md. (AP PhotoNick Wass) 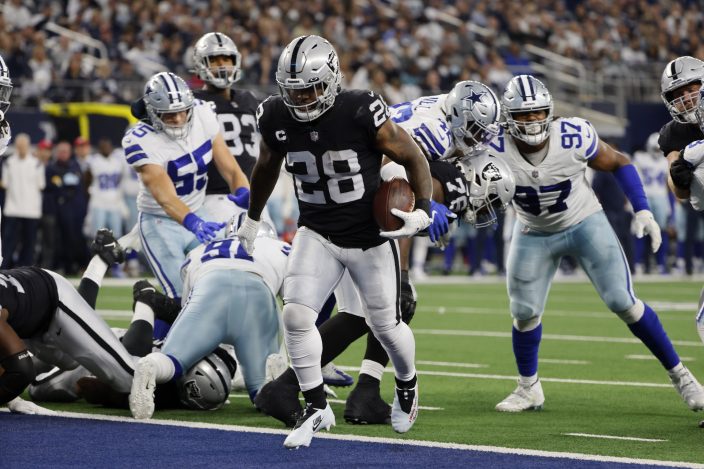 Las Vegas Raiders running back Josh Jacobs (28) gets past Dallas Cowboys' Leighton Vander Esch (55), Osa Odighizuwa (97) and others on his way to the end zone for a touchdown in the first half of an NFL football game in Arlington, Texas, Thursday, Nov. 25, 2021. (AP PhotoMichael Ainsworth)

WASHINGTON PLAYER TO WATCH: The season-ending injury to veteran linebacker Jon Bostic already thrust first-round pick Jamin Davis into a bigger role than expected during his rookie year. A surprise foot injury to Landon Collins, who had been excelling in a hybrid linebacker/safety role, puts even more onus on Davis against the Raiders.

KEY MATCHUP: Third downs. The Raiders have been the fourth-worst team on offense at converting third downs this season at 34.4%. Washington has been the worst team at stopping them, allowing 51.4% to be converted for the sixth-worst rate through 11 games since 1991. But while Las Vegas has been trending down of late with a league-worst 26.2% in six games since Jon Gruden resigned as coach, Washington has gotten better by allowing only 28.6% the past two games.

KEY INJURIES: Washington will be without Collins, RB J.D. McKissic (concussion) and OL Wes Schweitzer (ankle). Wendell Smallwood is expected to fill in for McKissic, with fourth-string center Keith Ismael set to make his first start after replacing Schweitzer against Seattle. ... Brian Johnson is Washington’s new kicker after Joey Slye landed on injured reserve with a pulled hamstring. ... Raiders TE Darren Waller (knee) is expected to miss his second game of the season. DE Carl Nassib (knee) also is likely to miss the game. ... Long snapper Trent Sieg is on the COVID-19 list. Carson Tinker was signed this week to take his place.

SERIES NOTES: Washington has won three straight and four of the past five in the series. ... In the 2017 meeting, the Raiders were held to 128 yards for their fewest in a game in the past six seasons. ... Raiders QB Derek Carr went 19 for 31 for 118 yards, one TD, two INTs and a 52.9 rating in that game. ... Washington defensive coordinator Jack Del Rio coached the Raiders from 2015-17 when they were in Oakland and is the only coach to lead them to the playoffs since 2003. ... Las Vegas is Washington’s final opponent out of the NFC East. The team finishes the season with two games against Dallas and Philadelphia and one against the New York Giants. ... Jackson's nine TDs vs Washington are tied for his most vs. any team. He also has nine against the Giants.

STATS AND STUFF: Washington has won three in a row since its bye week. ... The team’s 41:40 time of possession Monday night against the Seahawks was the franchise’s best since 1990. ... QB Taylor Heinicke completed 27 of 33 passes for 223 yards and a TD against Seattle. His completion percentage of 77.5 since Week 10 ranks third in the league over that span. ... Heinicke has thrown a TD pass in seven consecutive games. ... RB Antonio Gibson had a career-high 29 carries for 111 yards in the Seahawks game. WR Terry McLaurin leads Washington with 786 yards receiving. ... WR Curtis Samuel is expected to play a second consecutive game after missing the vast majority of the season with a lingering groin injury. ... TE Logan Thomas made three catches for 31 yards against Seattle in his return from a hamstring injury. ... Washington’s defense has allowed 279 yards a game over the past three outings, ranking fourth in the NFL in that span. ... DT Jonathan Allen leads Washington with six sacks. ... CB Kendall Fuller intercepted Russell Wilson’s pass on a 2-point conversion attempt with 15 seconds left to seal Washington’s third consecutive victory. ... The Raiders are coming off their sixth game in franchise history with at least 500 yards on offense and no turnovers. ... Las Vegas has lost two straight and three of four home games. The Raiders are 5-9 in two seasons at Allegiant Stadium. ... Las Vegas leads the NFL with 58 pass plays that have gained at least 20 yards and 29 completions thrown at least 20 yards downfield. Both marks are tied for the most by any team through 11 games in the past 15 seasons. ... The Raiders are 6-0 this season when Derek Carr throws for at least 300 yards and 0-5 when he doesn't. Carr's six 300-yard games are tied for the second most in team history to Rich Gannon's 10 in 2002. ... Las Vegas WR Hunter Renfrow had career highs with eight catches for 134 yards at Dallas. With Jackson also topping 100 yards it marked the first time since 2016 that two Raiders WRs did that in the same game. ... The Raiders forced five three-and-outs last week, their most in a game since 2018. ... Raiders DE Yannick Ngakoue has at least one sack in three straight games and has his sixth straight season with at least eight sacks to open his career.

FANTASY TIP: Raiders RB Josh Jacobs is coming off his most productive game of the season when he gained 112 yards from scrimmage with a TD against Dallas. With Waller out this week, Las Vegas may lean even more heavily on Jacobs and the running game.

As the market for college athlete ...