Phil Saviano was a clergy sex abuse survivor whose courage to go public and resolve to hold abusers and their enablers accountable inspired and strengthened survivors from around the world, his brother said at his funeral Mass on Friday.

Saviano, who died Sunday at age 69 after a battle with gallbladder cancer, was remembered at St. Denis Catholic Church in the small Massachusetts town of Douglas, the very church where he was first sexually molested at age 11 in the 1960s by the now-deceased parish priest.

He “brought hope, dignity, strength and rebirth to many of those who have been abused," Jim Saviano said during his eulogy. 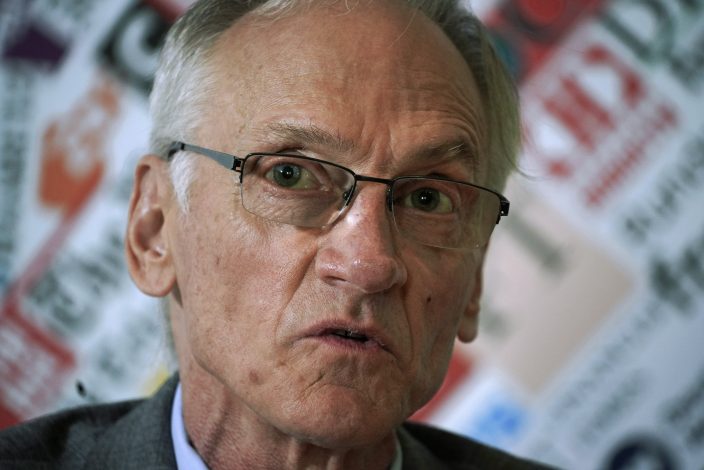 FILE — In this Feb. 17, 2020 file photograph, Phil Saviano, of BishopAccountability.org, talks to the media during a press conference at the Foreign Press association headquarters, on the occasion of the first anniversary of Pope Francis' summit on clergy abuse, in Rome. Saviano, a clergy sex abuse survivor and whistleblower who played a pivotal role in exposing decades of predatory assaults by Roman Catholic priests in the United States, has died, Sunday, Nov. 28, 2021. He was 69. (AP PhotoAndrew Medichini, File)

Jim Saviano said he has read hundreds of emails to his brother from people around the world, most of whom are survivors of abuse, thanking him for giving them the guidance and courage to move past the abuse and lead productive and joyful lives.

“My brother Phil was wonderful man whose work saved lives and brought happiness and love to many who had only known despair," he said. “And a man whose work influenced the Catholic Church to better itself, to change its behavior, hold abusers and their protectors accountable, and make protecting young innocent children once again one of its most important priorities."

Phil Saviano’s story figured prominently in the 2015 Oscar-winning film “Spotlight” about The Boston Globe’s investigation that revealed how priests molested children and how church leaders covered up the abuse, moving abusive priests from parish to parish.

But Phil Saviano was dismissed as a “conspiracy theorist" when he first went to Globe reporters with evidence of sexual abuse in the Catholic church, his brother said in his eulogy.

Several years later, with Saviano's help, the Globe’s 2002 series on the abuse earned it the Pulitzer Prize for Public Service in 2003 and led to the resignation of Cardinal Bernard Law, the church's leader in Boston.

While most people will remember Saviano for his efforts in exposing the ugly side of the church, he was so much more, said David Clohessy, the former director of the Survivors Network of those Abused by Priests.

Saviano often told Clohessy that he didn't want to be remembered as “just a survivor."

Saviano was a "Renaissance man who knew about and appreciated and loved art, and gardening, and travel, and music, and writing and everything else," he said.

The service was led by the Rev. Ron Coyne, a friend of Saviano's and himself someone was who has sometimes been an outspoken critic of the church.

While the abuse crisis drove many from the church, Saviano remained faithful, choosing change over abandonment, Coyne said.

“Phil's choice to remain Catholic might be inexplicable to some," Coyne said. “But it was his church and he was determined that it would become all it was intended to be."

Saviano, Coyne said, “knew that no religion had captured God and that the church needed to be held accountable by those who were true disciples of Christ, and he counted himself among them."