Dak Prescott and the Dallas Cowboys have issues on offense, with the luxury of time to fix them coming off a victory at New Orleans that could result in a three-game lead in the NFC East with five to go.

The Cowboys had a season-high six three-and-outs in a 27-17 victory over the Saints — not counting Prescott's interception on another three-play possession in the fourth quarter.

The Dallas offense has 16 three-and-outs the past three games after just 15 in the first nine. The Cowboys (8-4) might still have the NFL's No. 1 offense in total yards when they return from a mini-break at Washington on Dec. 12. But that unit hasn't looked anything like it for most of a 2-3 stretch. 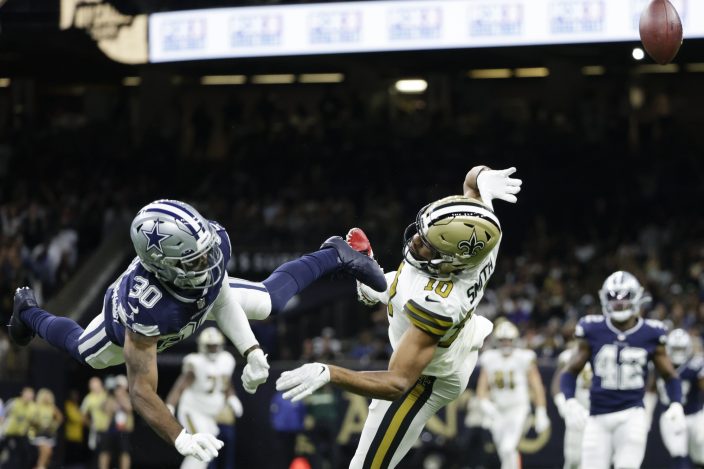 “We're far from where we want to be,” said receiver CeeDee Lamb, who helped a badly struggling run game look better statistically by setting up a touchdown with a 33-yard play on a screen pass that was officially a run.

“We didn't capitalize on a lot of drives,” Lamb said. “I feel like we kept them in the game. We know what we have. We know what we expect out of each other. Back to the drawing board, looking to be better next week.”

Three times in the fourth quarter, Prescott had chances to put away the Saints, twice after interceptions in the first four-pick game for the Dallas defense in almost 11 years. The offense failed each time, including on Prescott's interception on a poor decision, before the defense finally took care of it on Carlos Watkins' 29-yard pick-6. 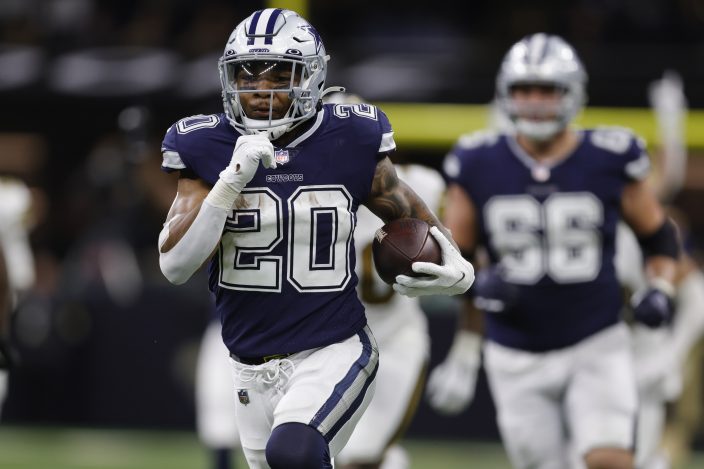 Dallas Cowboys running back Tony Pollard (20) runs against the New Orleans Saints during the second half of an NFL football game, Thursday, Dec. 2, 2021, in New Orleans. (AP PhotoBrett Duke)

“We're not doing well, and they're continuing to go out there and get us the ball back,” said Prescott, who fell short of a 70% completion rate for the fourth time in five games after reaching that mark in four of the first six. “Credit this win to them.”

The impact of linebacker Micah Parsons is growing to the point that NFL Defensive Rookie of the Year might just be the starting point for postseason awards. Run-savvy QB Taysom Hill made a futile effort to get away from Parsons on a critical third-down sack that knocked the Saints out of field-goal range.

Already the club rookie record holder with 10 sacks, Parsons has a shot at the rare combination of triple-digit tackles and double-digit sacks.

“I don’t think it’s time to sit on my couch, smiling and eating Cheetos just yet,” Parsons said. “I’m trying to do something way bigger than what anyone thought we could do this year.”

There is no question a right knee injury is significantly limiting running back Ezekiel Elliott, which is slowing the run game because the Cowboys keep playing him. The two-time rushing champ limped during and after his longest run, a 10-yarder when he had a huge lane on the outside and went out of bounds after picking up the first down.

“His trainers, the people that are the closest to his health, his medical situation, they think he’s really good to go,” Jones said. “I really look forward to a powerful and dynamic Zeke as we move on into this last part of the season.”

Brown bounced back nicely from the astounding four pass-interference penalties in a 36-33 overtime loss to Las Vegas on Thanksgiving. The last of them came on third-and-18 and put the Raiders in position for the winning field goal. Brown led Dallas with 10 tackles and had two pass breakups.

Pollard's 58-yard touchdown run, the most important offensive play for Dallas against New Orleans, was the longest run for the Cowboys since 2017. That big play on a sweep came a week after a 100-yard kickoff return.

The offensive line just isn't creating the inside running room needed for Elliott or Pollard. Without the big plays, the Cowboys had 22 carries for 55 yards, a 2.5-yard average.

There were no reports of injuries coming out of the game, and players potentially returning from injuries are the focus again, as they've been in recent weeks. Two more defensive linemen, tackle Neville Gallimore (elbow) and end Randy Gregory (calf), could be back against Washington.

297 — The listed weight of Watkins, a fifth-year player whose first career interception resulted in a touchdown. “It’s definitely an early Christmas present,” Watkins said. “It’s every fat guy’s dream, to get a pick and make it to the end zone.”

Coach Mike McCarthy is expected back from a COVID-19 absence that forced defensive coordinator Dan Quinn, who was fired as Atlanta's coach five games into the 2020 season, into the acting role. The NFC East takes center stage with the Cowboys playing second-place Washington twice in the next three games.

On brink of playoffs, Cowboys still trying to fix offense