French far-right leader Marine Le Pen paid her respects to Jewish and Polish victims of World World II on Friday, on the eve of a Warsaw gathering of right-wing European party leaders that she will attend.

Saturday's meeting will be hosted by Jaroslaw Kaczynski, the leader of Poland’s conservative nationalist ruling party, Law and Justice. Scheduled attendees include Hungarian Prime Minister Viktor Orban, and Polish media say the talks will focus on the future of the European Union

The gathering follows a visit by Le Pen to Budapest in October that was part of an effort by her and Orban to consolidate the European right. It also comes as both the Polish and Hungarian governments remain locked in a bitter standoff with the EU, which is withholding funds to both countries over democratic backsliding in Warsaw and Budapest. 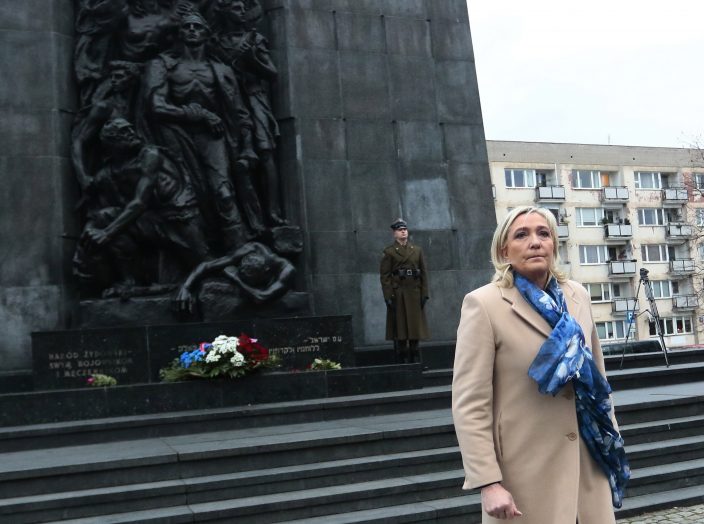 French far-right leader Marine Le Pen, left, pays respects at the memorial to the heroes of the Warsaw Ghetto Uprising, in Warsaw, Poland, Friday Dec. 3, 2021. The memorial honors Jews who rose up against Nazi German forces during World War II. Le Pen is in Warsaw to attend a meeting of the leaders of right-wing and far-right parties on Saturday. (AP PhotoAdam Jankowski)

Kaczynski's welcome of Le Pen marks a recent change for Poland's ruling conservatives, who had long refused to cooperate with her due to her warm relations with Russian President Vladimir Putin — a sensitive topic in a country long dominated by Russian and Soviet rule.

In 2019 Kaczynski said Le Pen’s party was among several groupings in Europe that are “obviously linked to Moscow and receive its support,” citing that as an impediment to cooperation.

But Polish Prime Minister Mateusz Morawiecki met with Le Pen in Brussels in October and was hosting her for a dinner in Warsaw on Friday evening.

Earlier Le Pen laid a wreath at a monument to Polish Jews slaughtered after taking up arms against Nazi German occupation forces in the 1943 Warsaw Ghetto Uprising. She also visited separate memorials in the Polish capital to Poles killed by the Soviet Union during the war.

Le Pen has for years sought to distance herself from the anti-Semitic legacy of her political group, with mixed success. In 2017 Le Pen faced criticism for denying that France was responsible for its role in rounding up French Jews for deportation to Nazi death camps.

McMorris in search of one more win: Olympic snowboard g ...

Mark McMorris points to the top of ...