Moving on from a quarterback with the combination of skill, leadership ability and hyper-focused work ethic Drew Brees displayed throughout his record-setting tenure with the New Orleans Saints was never going to be easy.

But succeeding after the departure of a star QB is possible if a team has the financial flexibility under the NFL's salary cap to load up on depth. Or if depth is thin, a little injury luck could keep a team competitive.

But the New Orleans Saints — who've won the NFC South each of the past four seasons — had to go into salary dumping mode this offseason and lost depth. They've also had a rash of injuries to a number of their most prominent and top-paid remaining players. 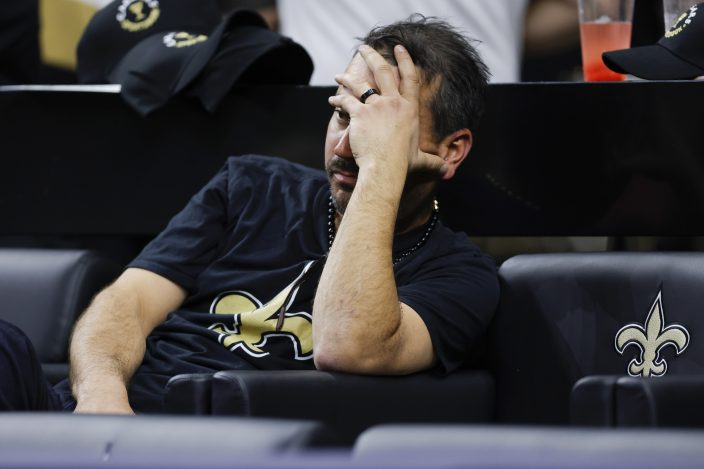 A New Orleans Saints fan watches play against the Dallas Cowboys during the second half of an NFL football game, Thursday, Dec. 2, 2021, in New Orleans. (AP PhotoBrett Duke)

The result is a losing streak that now stands at five games after Thursday night's 27-17 loss to the Dallas Cowboys. And there are dwindling opportunities for the Saints (5-7) to rally back into contention.

“I don’t want to just keep talking about getting healthy; obviously, we need to get healthy. That will help our team a lot," quarterback Taysom Hill said. "At the end of the day, this is the NFL. It’s the next-man-up mentality, and if somebody can’t go, he can’t go.

“We have to find ways to win football games with who’s available,” added Hill, who's been in and out of the lineup himself this season because of a concussion and a foot injury. "Everyone wants everyone to be available, but we’ll just take that day by day.”

But “next man up” can be difficult when depth has been thinned by financial considerations. Last offseason, the Saints either released or chose not to extend several starters and regulars, including defensive end and 2020 sacks leader Trey Hendrickson, stating cornerback Janoris Jenkins, starting defensive tackles Sheldon Rankins and Malcom Brown, starting receiver Emmanuel Sanders, and top receiving tight end Jared Cook.

Against Dallas, the Saints were missing starting offensive tackles Terron Armstead (knee) and Ryan Ramczyk (knee), which only compounded the lengthy absence of starting guard Andrus Peat, who is on injured reserve.

Record-setting receiver Michael Thomas, who started the season on the physically unable to perform list, had a rehab setback prevent him from playing at all this season.

And, of course, season-opening starting QB Jameis Winston had a season-ending knee injury during a game in which the Saints defeated defending Super Bowl champion Tampa Bay to improve to 5-2.

“We have to keep fighting; we are still in it," said Saints cornerback Marshon Lattimore, who intercepted Dallas' Dak Prescott. "We can go 10-7. We just have to believe that and go out and do it.”

The final stats wouldn't show it, but the Saints' highly rated run defense largely stifled Dallas on the ground for all but two crucial plays: Tony Pollard's 58-yard TD run and receiver CeeDee Lamb's 33-yard gain on a lateral pass. Dallas had just 55 yards on its 22 other rushing attempts. The Cowboys even gave up on trying to run while protecting a 10-point lead in the fourth quarter.

The Saints' offense is struggling to sustain drives early in games, having gone scoreless in the club's last five first quarters combined. That's forced New Orleans to play from behind for most of the last five games.

Despite throwing four interceptions, Hill looks like the starting QB going forward if he can stay healthy.

Payton said Hill did nothing wrong on his first interception. The other three came during a late comeback bid when Hill had to take more risks.

Playing most of the game with a splint on his throwing hand after injuring his middle finger, Hill finished with 264 yards and two TDs passing along with 101 yards rushing — and the Saints were in the game until the last five minutes.

Payton all but blamed receiver Kenny Stills for Hill's first interception, when the ball deflected off Stills' hands as he leaped to catch it along the sideline.

“That first interception, we have to catch,” Payton asserted. "It’s the perfect coverage (for Hill to make the throw he did). Look what we get. We dropped the ball. They made a good play on it. That’s unfortunate.”

Tight end Juwan Johnson hurt his neck after making a difficult, leaping catch over the middle.

0 — The number of previous five-game losing streaks the Saints have had since Payton was hired at coach in 2006.

The Saints have more than a week to heal up before visiting the woeful New York Jets on Dec. 12.

Kansas lawmakers were thinking of ...