The warning signs were there: A search for gun ammunition on a cellphone, drawings of blood on a school desk and a written plea for help.

But on Tuesday, roughly 30 miles (50 kilometers) north of Detroit at Oxford High School, the student in question was sent back to the classroom after a school meeting with his parents. Three hours later four students were shot to death and six other students and a teacher were wounded.

“The school should have been responsible to relay that to the sheriff’s office. It looks like this could have been prevented,” said Robert Jordan, founder and director of St. Louis-based Protecting Our Students. “People died because of those mistakes.” 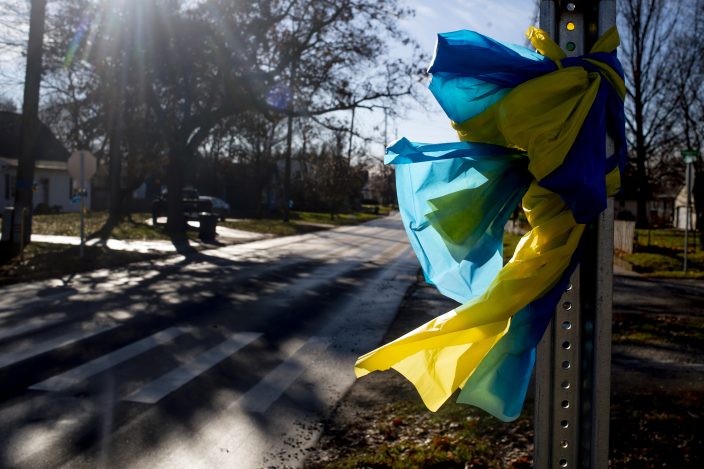 Navy blue and gold ribbons are wrapped around a stop sign one-quarter mile south of Oxford High School on Thursday, Dec. 2, 2021 in Oxford, Mich. A 15-year-old sophomore opened fire at his Michigan high school on Tuesday, killing four students, including a 16-year-old boy who died in a deputy’s patrol car on the way to a hospital, authorities said. (Jake MayThe Flint Journal via AP)

In addition to Jordan, parents of students slain in a 2018 school shooting in Florida say police should have been alerted before Tuesday's rampage.

The suspect in the Oxford High shooting, Ethan Crumbley, 15, is now charged as an adult with murder, terrorism and other crimes.

On Friday, prosecutors charged his parents, James and Jennifer Crumbley, with four counts each of involuntary manslaughter.

The 9mm semi-automatic pistol used in the shooting was bought at a local gun shop on Black Friday by James Crumbley as an early Christmas present for his son who is too young to legally own a handgun in Michigan, authorities said.

School officials became concerned about the younger Crumbley on Monday, a day before the shooting, when a teacher saw him searching for ammunition on his phone, Oakland County Prosecutor Karen McDonald told reporters.

On Tuesday, a teacher found a note on Ethan’s desk and took a photo. It was a drawing of a gun pointing at the words, “The thoughts won’t stop. Help me,” McDonald said.

There also was a drawing of a bullet, she said, with words above it: “Blood everywhere.” Between the gun and the bullet was a person who appeared to have been shot twice and is bleeding, she said. “My life is useless” and “The world is dead” also were written.

Both parents and Ethan met with school officials at 10 a.m. Tuesday. His parents left, and Ethan went back to his classes with his backpack, where investigators believe he stashed the gun. Authorities were not notified, something that county Sheriff Michael Bouchard said he wishes would have been done.

By 1 p.m. Tuesday, the school erupted in gunshots, chaos and bloodshed.

“The school had the responsibility to be doing an immediate threat assessment on the student and bringing into that conversation the sworn police officer and law enforcement,” said Lori Alhadeff, whose 14-year-old daughter, Alyssa, was one of 17 students slain in 2018 at Marjory Stoneman Douglas High in Parkland, Florida.

About five weeks before the Stoneman Douglas shooting, an FBI tip line received a call saying former student Nikolas Cruz had bought guns and planned to “slip into a school and start shooting the place up.”

That information was never forwarded to the FBI. Cruz, who had been expelled from the school a year earlier and had a long history of emotional and behavioral problems, never was contacted.

“We have to take these threats seriously,” Alhadeff said.

“It’s infuriating to me, upsetting,” she added. “It breaks my heart for the families that lost somebody. Knowing what we know now about the shooting at Marjory Stoneman Douglas we have to take these ( threats) seriously.”

But looking at such an issue after-the-fact raises other questions, said Christopher Smith, professor of Law and Public Policy at Michigan State University and chair of the Michigan Coalition to Prevent Gun Violence.

You have to consider whether the “teacher and school officials specifically have in their training that you need to report all these things,” Smith said.

“It’s easy enough to say people should do this and this and this,” he added. “If it’s not a part of the training, we have to wonder if it was realistic to expect someone to report this.”

An email left with Oxford Community Schools Superintendent Tim Throne on Friday was not returned, as were earlier requests for comment this week.

In a video message to the community Thursday night, Throne acknowledged the meeting of Crumbley, the parents and school officials. Throne offered no details but said that "no discipline was warranted.”

Jordan said much needed to be done after the problems were noticed Monday and Tuesday by school officials and before the shooting.

“They should have called the parents in to evacuate the child,” he said. “Then they should have looked at social media to see if they could discover any kind of plot. All of this is in an effort to prevent school shootings.”

Any teacher who sees concerning behavior should report it to the school administration and the administration should follow the policies of the school district, which “hopefully include the ability to do a behavioral threat assessment, getting the child help before they resort to violence," said Tony Montalto, whose 14-year-old daughter Gina also was killed in 2018 at Stoneman Douglas.

“You bring professionals together and find the best way to get a student help,” Montalto said. “Early intervention is the best way to come together. Waiting until it rises to the level of criminal activity or murder is too late.”

NBC will not send announcers to Beijing for Winter Game ...

In Georgia, GOP upheaval over elections continues into ...

The storm over how Georgia’s elect ...