The tanned, stubbled face behind the dark sunglasses and a black T-shirt underneath a white bib made Ryan Smith look the part of a PGA Tour caddie in the Hero World Challenge.

Looping for Tony Finau is a break from his day job, and Smith only missed his regular routine briefly when he considered the calendar. The Utah Jazz owner would be missing a home game Friday night against the Boston Celtics.

Even so, he couldn't pass up the opportunity. 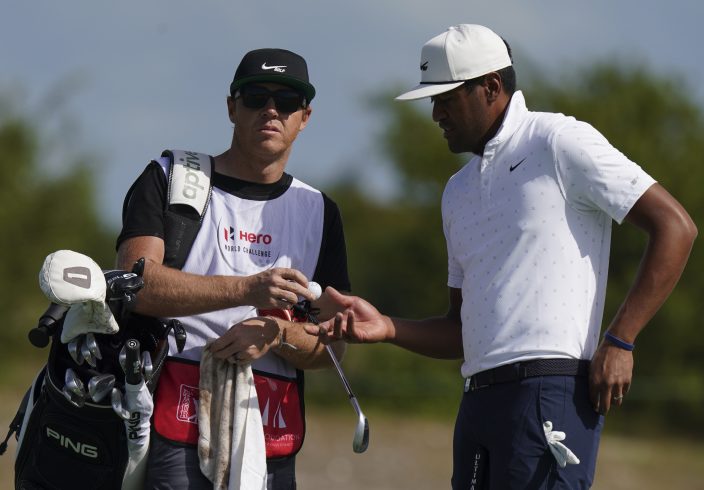 Caddie Ryan Smith, owner of the Utah Jazz and co-founder software firm Qualtrics, left, hands a ball to golfer Tony Finau, of the United States, on the third green during the second round of the Hero World Challenge PGA Tour at the Albany Golf Club, in New Providence, Bahamas, Friday, Dec. 3, 2021.(AP PhotoFernando Llano)

Finau's regular caddie, Mark Urbanek, is home as his wife prepares to have a child. Finau and Smith have been friends in Salt Lake City longer than either can remember.

“He called me and he's like, ‘Bro, I need you to caddie for me.' I had to answer the bell, right?” Smith said after his boss for the week rolled in an 18-foot birdie putt for a 6-under 66 to sit one shot off the lead going into the weekend.

Ryan Smith, owner of the Utah Jazz and co-founder of the software firm Qualtrics who is also the caddie for golfer Tony Finau, takes photos of Finau during a practice session before the start of the second round of the Hero World Challenge PGA Tour at the Albany Golf Club, in New Providence, Bahamas, Friday, Dec. 3, 2021.(AP PhotoFernando Llano)

This isn't their first time inside the ropes at a tournament. Finau and Smith have been partners twice in the Dunhill Links Championship, a three-course rotation that allows Smith to take on the Barry Burn at Carnoustie and the Road Hole at St. Andrews.

“I've been next to him as an amateur partner when he's in contention on the Old Course, so I know his game well enough, and kind of his temperament," Smith said. “It's the perfect setup." 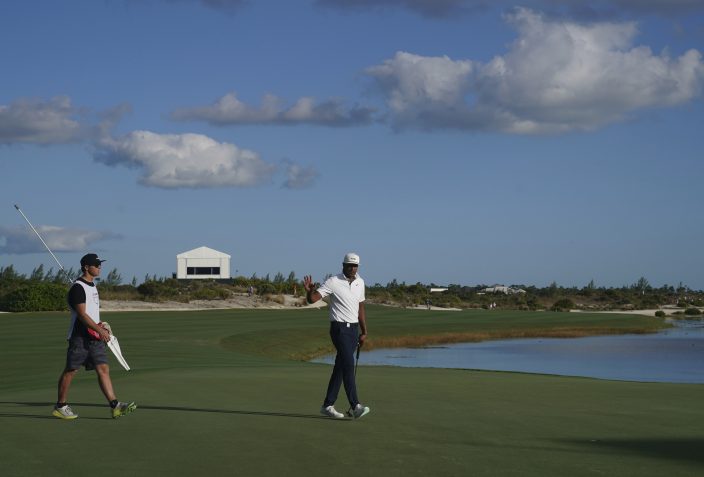 Tony Finau, of the United States, right, celebrates after sinking a birdie on the 18th hole during the second round of the Hero World Challenge PGA Tour at the Albany Golf Club, in New Providence, Bahamas, Friday, Dec. 3, 2021.(AP PhotoFernando Llano)

Smith reached the top of the stairs next to the scoring room as Finau stepped inside to sign his card at Albany Golf Club. This was more work than play, but he was loving it.

“Hauling a 50-pound bag around, I think everyone thinks I'm on vacation,” he said. “This is hard work. I'm exhausted.” 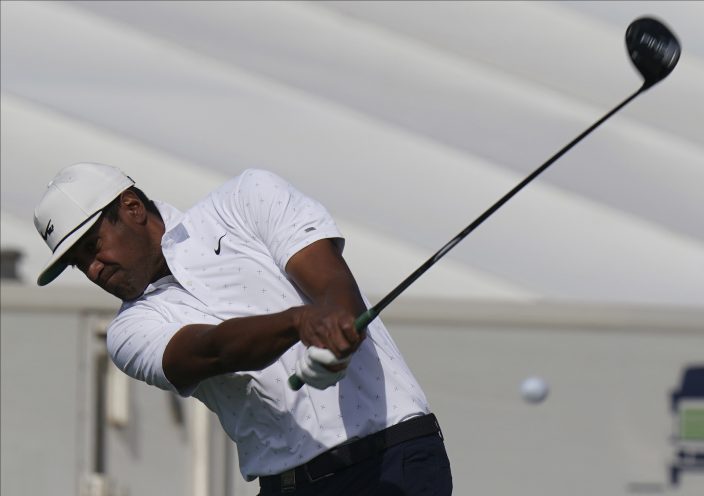 Tony Finau, of the United States, swings his club on the fourth tee during the second round of the Hero World Challenge PGA Tour at the Albany Golf Club, in New Providence, Bahamas, Friday, Dec. 3, 2021.(AP PhotoFernando Llano)

Smith is co-founder of Qualtrics, a cloud-computing company in Utah that was sold to German software firm SAP for $8 billion three years ago. The 44-year-old then became majority owner of the Jazz a year ago.

Basketball has been a lifelong passion, and so has golf.

“I had a stepfather who is no longer with us, but he kind of got me going in golf,” Smith said. “I worked at a golf course when I was 14 years old, picking balls on the range and then just loved it. At some point in my 20s, I was like, ‘OK, you’ve got to sit down and see what your things are. And golf is one of my things.”

Even as he was building Qualtrics, Smith spent enough time on his game to get down to a 2 handicap index. Along with playing the Dunhill Links with Finau in 2018 and 2019, he has been at the AT&T Pebble Beach Pro-Am with players like Branden Grace and Josh Teater.

Smith won the Jack Lemmon Award at Pebble in 2019, giving to the amateur who provides the most help to his pro. He and Teater finished third in the pro-am.

“It's like suiting up and playing an NBA preseason game,” Smith said.

As much as he loves the competition, Smith finds great value in relationships through golf, not to mention a little peace and quiet.

“Some of the best business relationships and the best partners I've met on the golf courses. No way our paths would have crossed if not for this game,” he said. “And it's the one place I go where the phone stays in the bag, which is incredible.

Smith plays as much basketball as he does golf with Finau, one of the more popular players on the PGA Tour. Finau ended a drought that stretched 142 tournaments over five years when he won The Northern Trust to start the PGA Tour's postseason.

That victory made Finau a shoo-in to be picked for the Ryder Cup team, where he teamed with Harris English during a record rout by the Americans at Whistling Straits.

This is a good way to end a big year — a 20-man field of elite players, a $3.5 million purse and $1 million to the winner. Finau says his billionaire friend will be treated like his regular caddie.

“He’s taking an extreme pay cut, I know that,” Finau told Golf Channel. "It’s a fun atmosphere and the perfect tournament to bring Ryan along.”