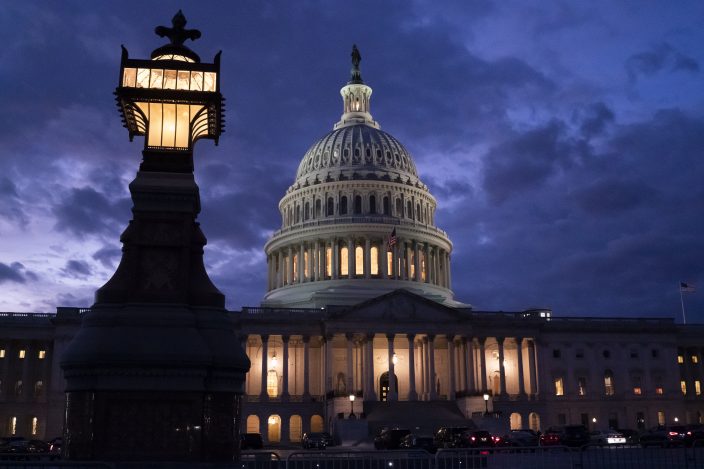 Night falls at the the Capitol in Washington, Thursday, Dec. 2, 2021, with the deadline to fund the government approaching. Republicans in the Senate are poised to stall a must-pass funding bill as they force a debate on rolling back the Biden administration's COVID-19 vaccine mandates for some workers. (AP PhotoJ. Scott Applewhite)

THE-AP-INTERVIEW-VIRUS-OUTBREAK-OMICRON — The man who likely first discovered the omicron variant bristles at that description, saying what’s most important is that scientists in Botswana and South Africa worked together to quickly alert the world to the startling new version of the coronavirus. By Andrew Meldrum. SENT: 840 words, photos. 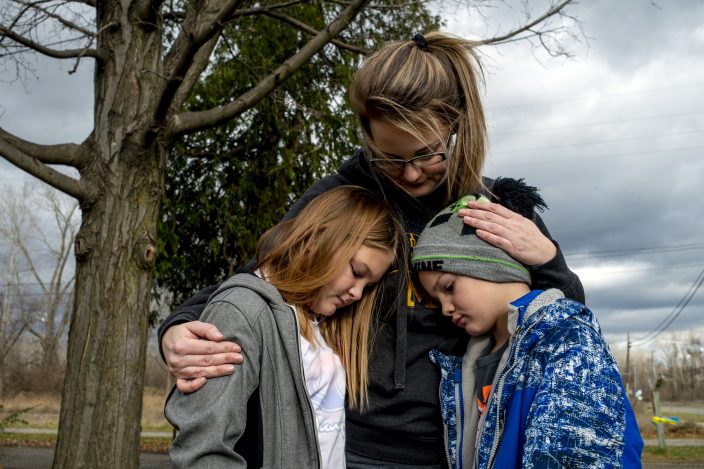 Vanessa LaBrie holds onto her two children, Kiersteyn Fields, 10, and her brother Landon Baker, 8 , as they stand in their yard up the road from Oxford High School on Thursday, Dec. 2, 2021 in Oxford, Mich. A 15-year-old sophomore opened fire at his Michigan high school on Tuesday, killing four students, including a 16-year-old boy who died in a deputy’s patrol car on the way to a hospital, authorities said. (Jake MayThe Flint Journal via AP)

VIRUS OUTBREAK-US — The arrival of the omicron variant of the coronavirus in the U.S. has health officials in some communities reviving contact tracing operations in an attempt to slow and better understand its spread as scientists study how contagious it is and whether it can thwart vaccines. By Heather Hollingsworth and Bobby Caina Calvan. SENT: 920 words, photos.

ODD-MISSING-MARIAH-CAREY-ALBUM — Massachusetts congresswoman Ayanna Pressley is upset that her beloved Mariah Carey Christmas album has gone missing, but she needn’t worry — she was promised a replacement copy courtesy of the five-time Grammy winner herself. SENT: 160 words, photos.

OSTEEN-CHURCH-THEFT — Houston police are investigating whether hundreds of envelopes of cash and checks discovered by a plumber during repair work that was being done at Pastor Joel Osteen's Lakewood Church in Houston is connected to $600,000 in collections stolen in 2014. SENT: 600 words, photo.

VIRUS-OUTBREAK-NEW-JERSEY — The New Jersey statehouse requirement for visitors to show proof of COVID-19 or a negative test is still in effect after Republican lawmakers defied it ahead of a voting session. SENT: 290 words, photos.

VIRUS-OUTBREAK-BRAZIL-BOLSONARO — A justice of Brazil’s top court ordered on Friday that President Jair Bolsonaro be investigated for comments linking COVID-19 vaccines to AIDS — an assertion rejected by doctors and scientists. SENT: 240 words, photos.

VIRUS-OUTBREAK-AIR-FORCE-VACCINES — More than 11,000 members of the Air National Guard and Reserves did not meet Thursday’s deadline to get the COVID-19 vaccine, and could begin to face consequences if they don’t get the mandated shots or receive an exemption. SENT: 450 words.

VIRUS OUTBREAK-NATIONAL GUARD — The chief of the National Guard has tested positive for COVID-19 after returning from an overseas trip to visit guard troops in Europe for Thanksgiving. SENT: 200 words, photo.

CYBERSECURITY-NSO GROUP-STATE DEPARTMENT — The phones of 11 U.S. State Department employees were hacked using technology from Israel’s NSO Group, the world’s most infamous hacker-for-hire company. The employees were all located in Uganda and included some foreign service officers. SENT: 820 words, photo.

CAPITOL BREACH-CONTEMPT — The House committee investigating the Jan. 6 Capitol insurrection postpones a deposition with a former Justice Department official scheduled for Saturday until Dec. 16 due to a “medical condition that precludes his participation.” By Mary Clare Jalonick. SENT: 580 words, photo.

ELECTION-2022-SENATE-PENNSYLVANIA — Rich, Republican and want to be a U.S. senator? Pennsylvania might as well hang a welcome sign. The presidential battleground state’s high-stakes race for an open Senate seat is seeing candidates with big bank accounts and big-time connections exchanging their blue-state mansions for decidedly purple Pennsylvania, and pursuing an opportunity they might never have at home. SENT: 980 words, photos.

DAUNTE WRIGHT-OFFICER TRIAL-EXPLAINER-JURORS — A look at the jurors who will hear testimony in the manslaughter trial of former suburban Minneapolis police officer Kim Potter, who is charged in the April shooting death of 20-year-old Black motorist Daunte Wright. Potter says she meant to use her Taser on Wright and drew her gun by mistake. Opening statements are scheduled for Wednesday. SENT: 2,400 words, photos.

POLAND-EUROPE-POPULISTS — The leaders of right-wing populist parties are gathering in Warsaw to discuss how they can work together to bring change to the European Union, which they accuse of acting like a super-state that is eroding the traditions and powers of the EU’s 27 member nations. SENT: 450 words, photos.

INDIA-STORM — A tropical storm weakened after dumping heavy rains overnight in parts of southern India off the Bay of Bengal as more than 50,000 people evacuated to government-run camps, officials say. SENT: 380 words, photo.

COMBATING-RETAIL-THEFT — Spurred by a recent run of large-scale smash-and-grab robberies, prosecutors and retailers are pushing back on assertions by California’s governor and attorney general that they have enough tools to combat retail theft in the wake of a voter-approved easing of related laws. SENT: 1,010 words, photo.

BKN--SUNS-WARRIORS — Stephen Curry bounced back from one of the worst shooting nights of his career and scored 23 points, and the Golden State Warriors convincingly ended the Phoenix Suns’ 18-game winning streak, 118-96. The Warriors (19-3) limited the Suns (19-4) to a season-low for scoring and slipped past Phoenix for the best record in the NBA. The Suns were within 83-74 following a dunk by JaVale McGee early in the fourth quarter but never got closer. SENT: 820 words, photos.

FBC--T25-PAC-12 CHAMPIONSHIP — Devin Lloyd returned an interception for a touchdown, Cam Rising threw for another score and No. 14 Utah clinched the first Rose Bowl berth in school history with a 38-10 victory over No. 10 Oregon in the Pac-12 championship game. This game was a near carbon copy of the one in Salt Lake City two weeks ago when the Utes jumped out early and won 38-7. While that game all but ended the playoff hopes for Oregon, the rematch delivered coach Kyle Whittingham and the Utes the Rose Bowl prize they had been seeking since joining the Pac-12 in 2011. By Josh Dubow. SENT: 870 words, photos.

The Tennessee Titans have scratche ...