The center-left party of German Chancellor-designate Olaf Scholz is meeting Saturday to decide whether to approve a deal to form a new government with environmentalist and pro-business parties — the first of three such decisions needed for Scholz to take office next week.

Scholz's Social Democrats narrowly won Germany's Sept. 26 election and launched negotiations with the Greens and the business-friendly Free Democrats to form a governing coalition that hasn't been tried before at the federal level. They emerged with a deal on Nov. 24 after relatively quick negotiations.

The three-way alliance aims to modernize Europe’s biggest economy and step up efforts against climate change. It will send outgoing Chancellor Angela Merkel's center-right Union bloc into opposition after 16 years and end an uncomfortable “grand coalition” of Germany's traditional big parties in which the Social Democrats were the junior partners. 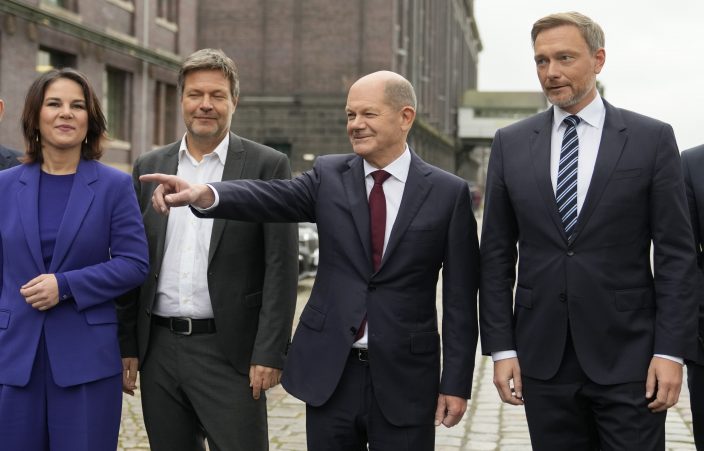 The plan is for Scholz to be elected as chancellor on Wednesday and to lead what has been called a “traffic light” coalition after the parties' colors of red, green and yellow.

Before that can happen, members of the parties need to approve the coalition deal. The Social Democrats are holding a convention on Saturday and the Free Democrats have one scheduled for Sunday. The result of a ballot of the Greens’ roughly 125,000-strong membership is expected on Monday.

Key pledges by the prospective partners include an increase in Germany's minimum wage to 12 euros ($13.50) per hour from the current 9.60 euros — a move that Scholz has said “means a wage increase for 10 million citizens.” And they also aim to get 400,000 new apartments per year built in an effort to curb rising rental prices.

Scholz, 63, has been Merkel’s finance minister and vice chancellor since 2018. Unlike the other two parties, the Social Democrats haven't yet named their remaining seven Cabinet nominees, who will include the interior, defense and health ministers. Overseeing the Health Ministry is a crucial job at a time when Germany is imposing new restrictions to break a wave of coronavirus infections.

Germany on new path as Scholz replaces Merkel as chancellor