Outgoing Chancellor Angela Merkel on Saturday made what is likely her final appeal before leaving office next week for Germans to get vaccinated against COVID-19.

Merkel gave what is expected to be her last weekly video message two days after federal and state leaders decided on a series of measures meant to break a wave of coronavirus infections.

The measures include excluding unvaccinated people across the country from nonessential stores, restaurants and sports and cultural venues. In a longer-term move, parliament will consider a general vaccine mandate. 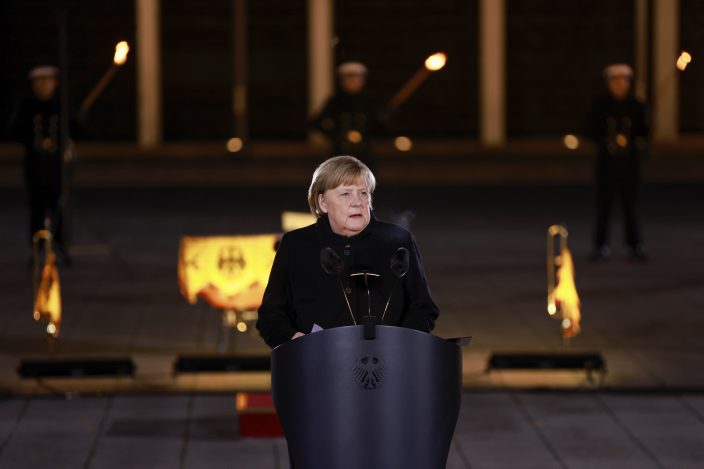 German Chancellor Angela Merkel makes a speech at the Defence Ministry during the Grand Tattoo (Grosser Zapfenstreich), a ceremonial send-off for her, in Berlin on Thursday, Dec. 2, 2021. (Odd AndersenPool Photo via AP)

At least 68.9% of Germans are fully vaccinated against the coronavirus, short of the government's aim of a minimum 75% vaccination rate. The number of unvaccinated residents has been blamed as a key factor in a surge of new virus cases in recent weeks.

Official figures suggest that the infection rate may now be stabilizing, but at too high a level. 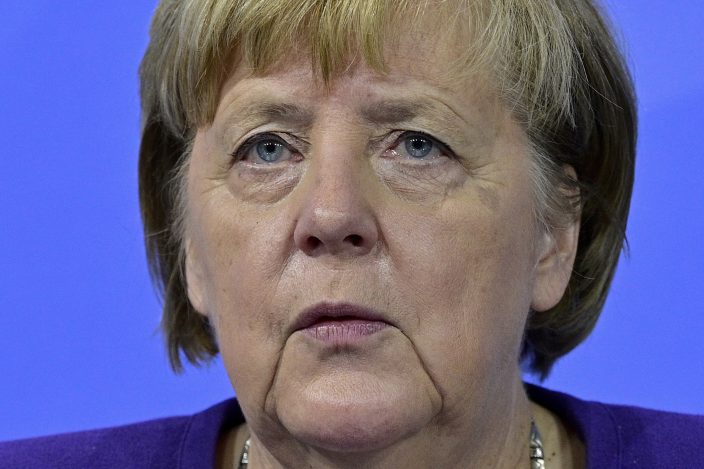 German Chancellor Angela Merkel attends a press conference following a meeting with the heads of government of Germany's federal states at the Chancellery in Berlin, Thursday, Dec. 2, 2021. Merkel said Thursday that people who aren't vaccinated will be excluded from nonessential stores, cultural and recreational venues, and parliament will consider a general vaccine mandate, as part of an effort to curb coronavirus infections that again topped 70,000 newly confirmed cases in a 24-hour period. (John MacdougallPool Photo via AP)

“Every one of them leaves behind families or friends, stunned, speechless and helpless,” Merkel said in her video message. “This is so bitter because it is avoidable. With the effective and safe vaccines, we have the key to this in our hands.”

She renewed a plea to Germans to take the virus seriously, adding that the new omicron variant “appears to be even more contagious than the previous ones.”

“Get vaccinated, no matter whether it's a first vaccination or a booster,” Merkel said. “Every vaccination helps.”

Berlusconi drops bid to be elected as Italy's pres ...

Majority of COVID patients in German ICUs not vaccinated