Members of France’s main conservative party are picking their presidential candidate Saturday, a decision that could significantly shape April’s election.

The head the Paris region, Valérie Pécresse, and a hardline lawmaker from Nice, Eric Ciotti, are competing in the final round of The Republicans’ primary.

About 140,000 registered members of The Republicans are eligible to participate in the electronic voting. The result is to be announced later Saturday. 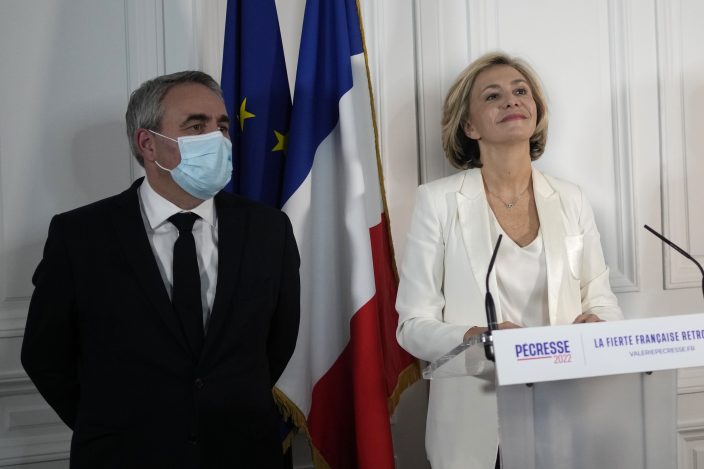 Valerie Pecresse speaks during a press conference at her campaign headquarters, with losing candidate Xavier Bertrand at her side, Thursday, Dec. 2, 2021 in Paris. Valerie Pecresse, a moderate conservative, will go into a runoff as the favorite to represent the conservative Les Republicains' candidate in the French presidential election in April. Valerie Pecresse will face Eric Ciotti, a right-winger in the party. (AP PhotoChristophe Ena)

Immigration and security emerged as top issues in the party primary largely because of another presidential candidate, far-right former TV pundit Eric Zemmour. Zemmour, an author and former journalist with multiple hate-speech convictions, formally declared his candidacy this week in a video relaying anti-migrant, anti-Islam imagery.

Pécresse, 54, is a former minister and government spokesperson under conservative President Nicolas Sarkozy from 2007 to 2012.

If elected by party members and later by French voters, she vowed to “break” with the centrist policies of incumbent President Emmanuel Macron. Macron is expected to seek a second term but he has yet to formally declare his candidacy. 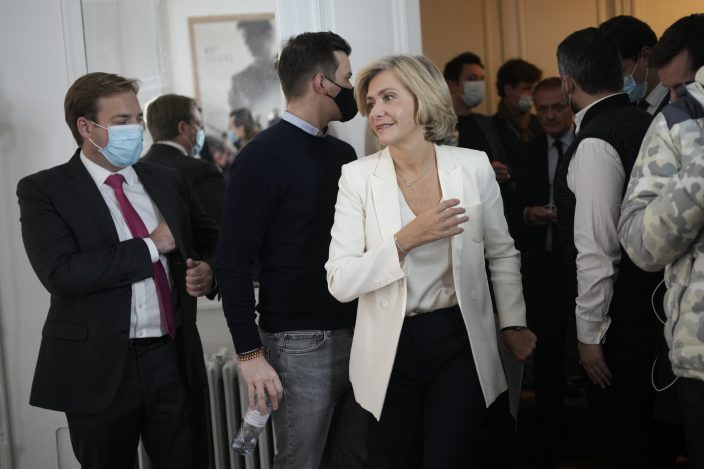 Valerie Pecresse arrives for a press conference at her campaign headquarters Thursday, Dec. 2, 2021 in Paris. Valerie Pecresse, a moderate conservative, will go into a runoff as the favorite to represent the conservative Les Republicains' candidate in the French presidential election in April. Valerie Pecresse will face Eric Ciotti, a right-winger in the party. (AP PhotoChristophe Ena)

Pécresse said her first action as president would be to end France's 35-hour workweek so employees work and earn more. She also has has promoted a tough stance on immigration, saying that people who entered the country illegally should be deported.

A supporter of the European Union, Pécresse left The Republicans in 2019 amid leadership divisions after the party had a poor showing in EU elections. She rejoined the party this year to be able to participate in the primary.

Ciotti, 56, is known for his longstanding positions as part of the party's right wing, especially on security, immigration and religion.

He wants wording about France’s Christian roots added to the Constitution and a ban on Muslim girls wearing veils.

Ciotti vowed to massively reduce immigration and wants to change the law that grants nationality to people born in French territory. He proposes instead nationality by descent, or the “right of blood.”

He also wants to establish a “French Guantanamo” to imprison people convicted of terror-related charges.

The Republicans, which still heads several regional assemblies and holds a majority in the French Senate, is the last of France’s traditional parties to choose its presidential contender.

On the left, Paris mayor Anne Hidalgo is running for the Socialist party, and the Greens chose European lawmaker Yannick Jadot, a former Greenpeace activist. The far-left leader of the Rebel France party, Jean-Luc Mélenchon, is seeking the presidency for the third time.