But it’s far uglier than that.

Members of the Penobscot Nation in Maine have produced an educational film addressing how European settlers scalped — killed — Indigenous people during the British colonial era, spurred for decades by cash bounties and with the government’s blessing. 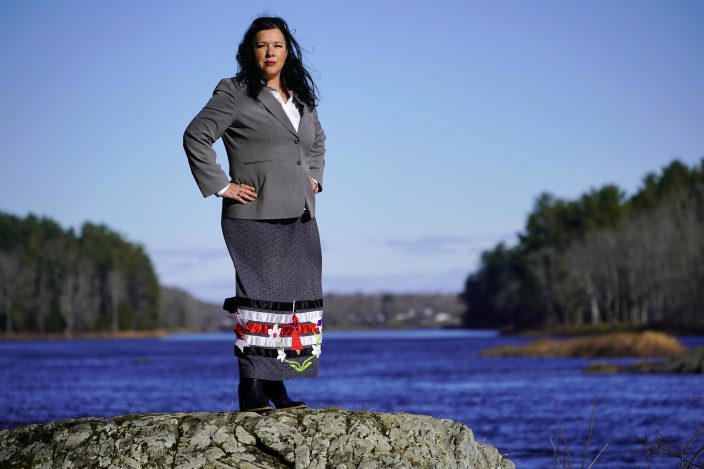 Dawn Neptune Adams stands on the banks of the Penobscot River, Tuesday, Nov. 23, 2021, on Indian Island, Maine. When Adams was a child she was one of the many Penobscot and Passamaquoddy people who were removed from their homes by the state of Maine and placed with white foster families. She recently co-directed a film that focuses on the Phips Proclamation of 1755, one of the dozens of government-issued bounty proclamations that directed colonial settlers to hunt, scalp and kill Indigenous people for money. (AP PhotoRobert F. Bukaty)

“It was genocide,” said Dawn Neptune Adams, one of the three Penobscot Nation members featured in the film, called “Bounty.”

She said the point of the effort isn’t to make any Americans feel defensive or blamed. The filmmakers say they simply want to ensure this history isn’t whitewashed by promoting a fuller understanding of the nation’s past.

At the heart of the project is a chilling declaration by Spencer Phips, lieutenant governor of the Province of Massachusetts Bay.

Issued in November 1755, it gave “His Majesty’s Subjects” license to kill Penobscots for “this entire month.” The reward was about $12,000 in today’s dollars for the scalp of a man, and half that for a woman’s scalp. The amount was slightly less for a child. Settlers who killed Indigenous people were sometimes rewarded with land, in addition to money, expanding settlers’ reach while displacing tribes from their ancestral lands.

The declaration is familiar to many Penobscots because a copy of the document was displayed at the tribal offices at Indian Island, Maine.

“If every American knew the whole history of this country, even the dark and uncomfortable parts, it would help us to get along better and to understand each other better,” said Maulian Dana, who co-directed the film with Neptune Adams.

Both Europeans and Native Americans engaged in scalping, but English colonists greatly expanded the practice when the government sanctioned the effort with bounties, the filmmakers said.

The first known colonial scalping order is from 1675. That’s just a few short decades after the first Thanksgiving in 1621, when Pilgrims gathered with Wampanoag people for a harvest celebration, said Chris Newell, who is Passamaquoddy and wrote “If You Lived During the Plimoth Thanksgiving.”

All told, there were more than 70 bounty proclamations encouraging white colonists to kill tribal members in what’s now New England, and another 50 government-sanctioned proclamations elsewhere across the country, the filmmakers’ research found. State and colonial governments paid out at least 375 bounties for Indigenous people across New England between 1675 to 1760, they said.

“Most people realize that Native Americans were here first and that the colonists did their best to remove them from the land. They just have no idea of the extremes that it took,” Baker said. “Pretty much any Native American man, woman or child was considered fair game at times, and sometimes by the government.”

Neptune Adams and Dana, along with Tim Shay and their families, were filmed at the Old State House in Boston. It’s the same location where Lt. Gov. Phips’ scalping order was signed.

In “Bounty,” the three participants describe having nightmares of Penobscots being chased through the woods, and discuss the dehumanization and massacre of their people.

“When you learn about a people’s humanity, that affects how you treat my kids, how you vote on public policy, how you may view my people,” Dana said.

Accompanying the short video is a 200-page study guide aimed at teachers. Several school districts, including Portland Public Schools in Maine’s largest city, are purchasing licenses for the video and plan to use the study guides to assist instruction.

In Portland, the scalp bounties will be included as one element in a curriculum that will bring the school district into compliance with a 2001 law requiring students to be taught Wabanaki Studies focusing on Native Americans in Maine, said Fiona Hopper, social studies teacher leader and Wabanaki studies coordinator.

“Students and teachers will see in ‘Bounty’ the ongoing endurance and resistance of Penobscot Nation citizens,” Hopper said.

Hermes led the pack on Saturday’s ...

Marcus Rashford scored in the thir ...