The first week of the sex-abuse trial of Ghislaine Maxwell saw the first of her four main accusers taking the witness stand to give emotional testimony accusing the British socialite of coaxing her — at just 14 — into sexual encounters with financier Jeffrey Epstein.

The jury at the federal trial in Manhattan also heard from former employees who offered an inside look at a lavish lifestyle Epstein shared with Maxwell, who was his girlfriend and then his employee. Her lawyers say she’s a scapegoat for Epstein, who killed himself in 2019 while awaiting trial behind bars.

Here are snapshots from a trial drawing international attention: 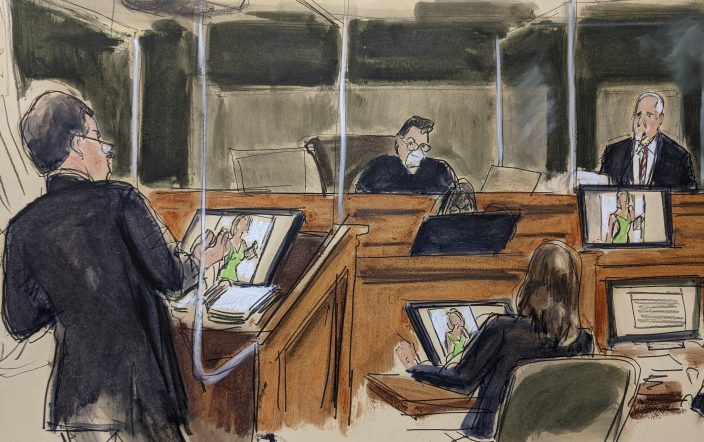 The first Maxwell accuser’s story began innocently enough: She was a 14-year-old eating ice cream at a music camp in 1994 when she was approached by Epstein and Maxwell, walking her Yorkie. What followed over the next few years, the accuser said, scarred her for life.

The witness — a woman now in her early 40s who was introduced to jurors as “Jane” to protect her privacy — testified that Maxwell and Epstein groomed her by taking her shopping and inviting her and her mother to Epstein’s mansion in Palm Beach, Florida. 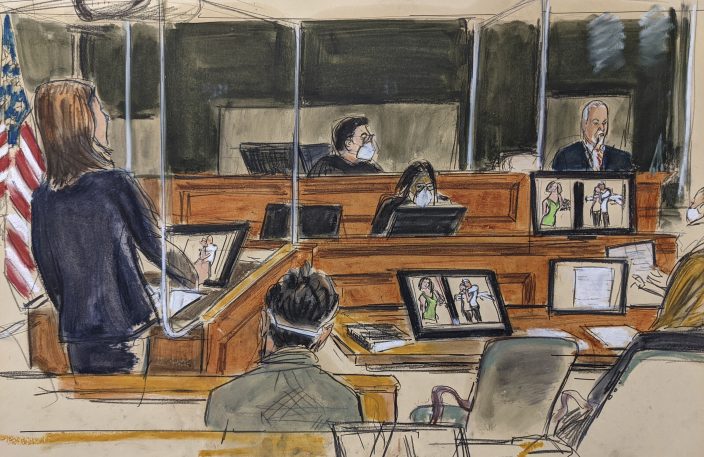 Soon she was visiting the home by herself when, she said, Maxwell and Epstein lured her into unwanted sexual contact that Maxwell treated as “no big deal." It was a pattern prosecutors hope to prove was repeated over and over with other girls and young women.

The defense demanded to know why “Jane” had taken so long to come forward.

“I was scared,” she said, choking back tears. "I was embarrassed, ashamed. I didn’t want anybody to know any of this about me.” 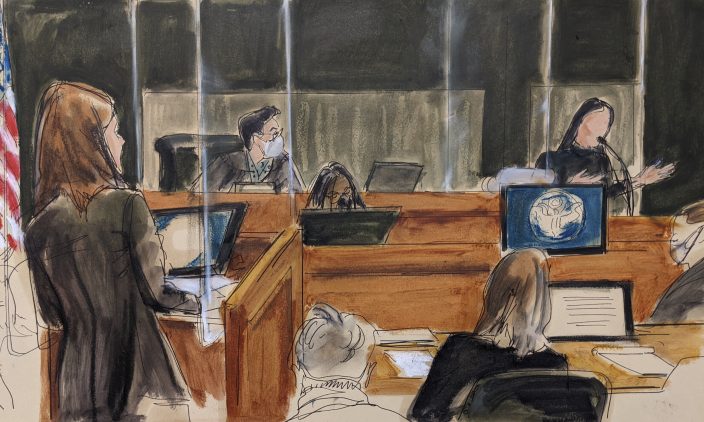 Prosecutors say Maxwell created “a culture of silence” to shroud her and Epstein's crimes. And a piece of evidence seemed to put that culture in writing.

Those instructions were part of a 58-page booklet with rules for staff working at the mansion. As if to drive home the point about keeping Maxwell and Epstein’s secrets, prosecutors say Epstein ordered the construction of a detached staff quarters surrounded by a tall wall that prevented any view of the main house. In this courtroom sketch, Ghislaine Maxwell's defense attorney Laura Menninger, left, cross examines a witness using the pseudonym "Jane" Tuesday Nov. 30, 2021, in New York. The woman testified that she had repeated sexual contact with disgraced financier Jeffrey Epstein when she 14 and that Maxwell was there when it happened. (Elizabeth Williams via AP)

Juan Alessi, a former estate manager, testified he considered the privacy measure “a kind of warning that I was supposed to be blind, deaf and dumb, to say nothing of their lives.”

Alessi recalled seeing “Jane” several times at the residence and noticed she looked underage. But he also said he never saw her enter the master bedroom with Epstein — or noticed anything else suspicious about her and the revolving door of young women that would have indicated sex crimes were occurring in his workplace.

He claimed no one alerted him to any misconduct. 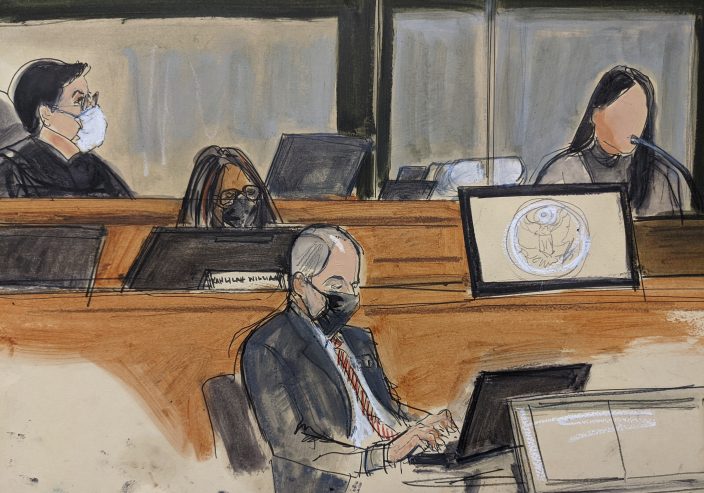 In this courtroom sketch, Judge Alison Nathan, far left, listens as a witness using the pseudonym "Jane" testifies during Ghislaine Maxwell's trial, Tuesday Nov. 30, 2021, in New York. The woman testified that she had repeated sexual contact with disgraced financier Jeffrey Epstein when she 14 and that Maxwell was there when it happened. (Elizabeth Williams via AP)

“I wish they would have because I would have done something,” he said.

DEFENSE ON THE ATTACK

The defense displayed some of the tactics it plans to use to discredit “Jane” and three other key accusers who are slated to testify before the end of the month. In this courtroom sketch, Ghislaine Maxwell is seated at the defense table while watching testimony of witnesses during her trial, Tuesday, Nov. 30, 2021, in New York. (Elizabeth Williams via AP)

Maxwell’s lawyers are seeking to portray their accounts of abuse as unreliable, suggesting they have faulty memories and are being manipulated by lawyers encouraging them to play up Maxwell’s role in civil claims after Epstein died. One of the lawyers went so far as to infer that “Jane” — a veteran television actor — could be using her acting skills to embellish her testimony.

The lawyer ran down some of the plot lines “Jane” has tackled over the years: protective mom, victim of bullying, someone stalked by serial killers, prostitute. “Not my favorite role,” the witness said of the last.

When asked whether her background made her adept giving a “melodramatic and sentimental treatment of interpersonal situations,” she demurred. 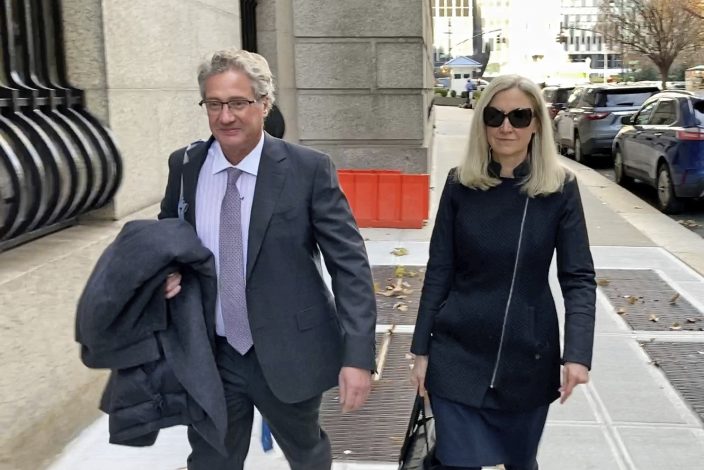 Ghislaine Maxwell's defense attorneys Laura Menninger and Jeffrey Pagliuca arrive at court in New York, on Friday, Dec. 3, 2021. The case against Maxwell stems from four now-adult women who said she recruited them into being sexually abused by Jeffrey Epstein. (AP PhotoTed Shaffrey)

Three more main accusers are waiting in the wings to testify against Maxwell. When that will happen remains unclear, with prosecutors staying tight-lipped about the order of their witnesses. 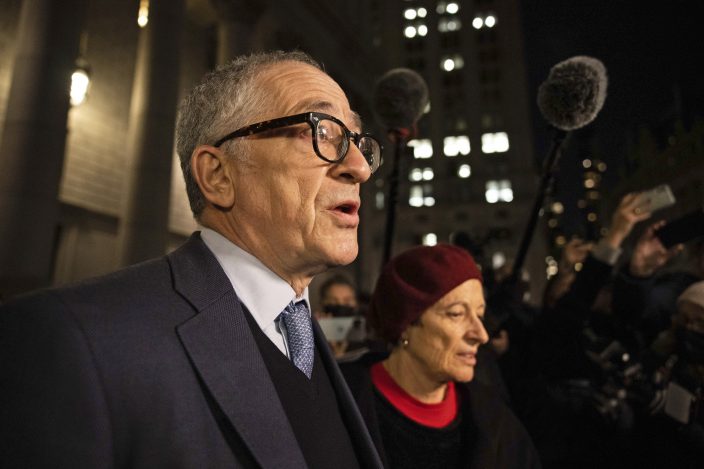 But the defense’s opening statement gave hints about the accusers up next.

A Maxwell lawyer said one is a psychotherapist who met Epstein in New York City when she was 16 and later visited his ranch in New Mexico. Another is a former model from Britain who once dated one of Maxwell’s friends. The third is someone the defense claims introduced Epstein to other victims who are not in the case.

Other evidence the prosecution still plans to introduce: flight logs of Epstein’s private planes — prosecutors say they confirm that Maxwell, Epstein and alleged victims traveled together — and FedEx records confirming that Epstein sent a gift to one victim when she was just 15 years old. 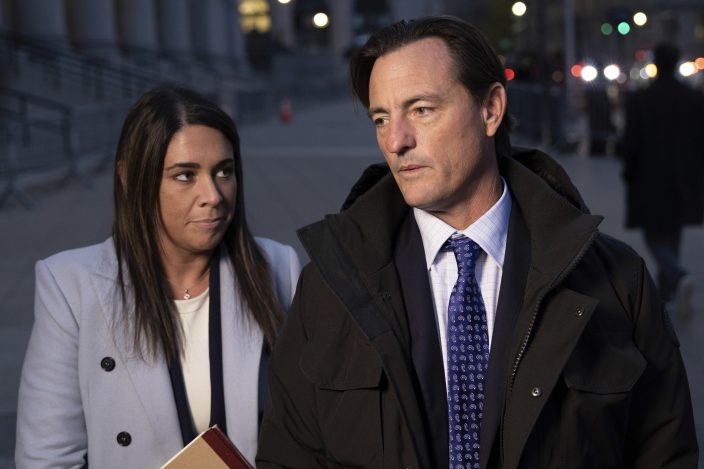 It's projected the trial could last another five weeks.