Ciro Immobile scored twice as Lazio comfortably won 3-1 at Sampdoria despite playing the final quarter of the match with 10 men on Sunday in Serie A.

Fiorentina moved into fifth after winning 3-2 at Bologna. 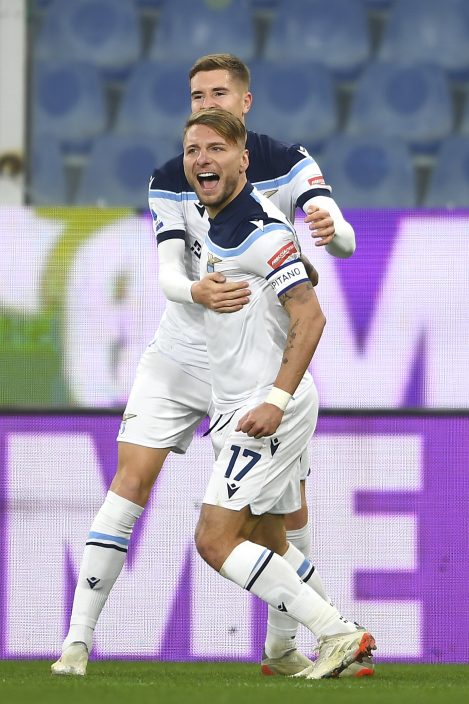 Lazio's Ciro Immobile celebrates after scoring during the Serie A soccer match between Sampdoria and Lazio, at the Genoa Luigi Ferraris stadium, Italy, Sunday, Dec. 5, 2021. (Tano PecoraroLaPresse via AP)

Troubled Juventus can move back above Lazio and level on points with Fiorentina if it beats relegation-threatened Genoa later Sunday.

Lazio had only picked up one point from its past three league matches and that came in Thursday's extraordinary 4-4 draw against Udinese.

It dominated from the start at Sampdoria and was 3-0 up by halftime following Sergej Milinković-Savić's early opener and a double from Immobile. 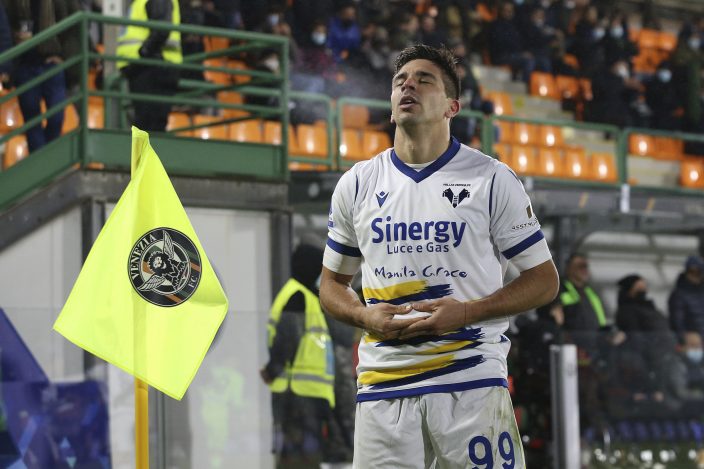 Verona's Giovanni Simeone celebrates after scoring during the Serie A soccer match between Venezia and Hellas Verona, at the Penzo stadium in Venice, Italy, Sunday, Dec. 5, 2021. (Paola GarbioLaPresse via AP)

However, Milinković-Savić was also sent off in the 67th minute after two yellow cards in a matter of moments — the first for a foul and the second for something he said to the referee.

But Samp only managed to pull one back in the final minute through Manolo Gabbiadini. 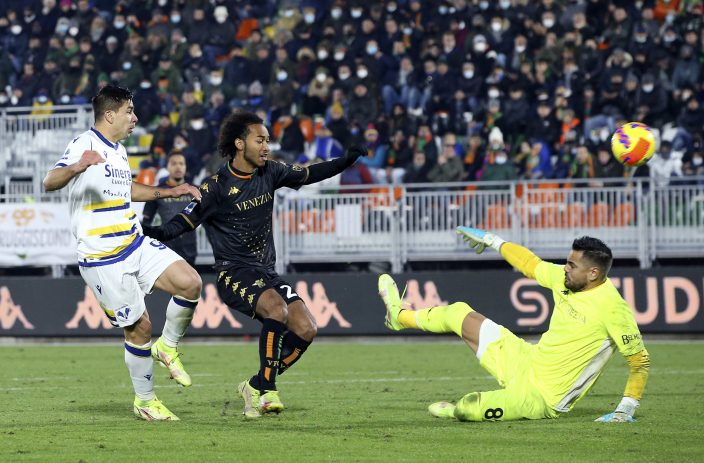 Verona's Giovanni Simeone, left, scores during the Serie A soccer match between Venezia and Hellas Verona, at the Penzo stadium in Venice, Italy, Sunday, Dec. 5, 2021. (Paola GarbioLaPresse via AP)

Venezia appeared to be on the way to a comfortable victory when it went 3-0 up inside 28 minutes but Hellas Verona went on to win 4-3.

Matters appeared to be going to plan for the home side at halftime but the match turned shortly after the hour when Venezia defender Pietro Ceccaroni — who had scored the opener — was sent off for a desperate goalline clearance using his arm.

Gianluca Caprari converted the penalty to reduce the deficit to 3-2 as the Venezia forward had earlier headed into his own net.

Verona ended up going from 3-0 down to 3-3 in the space of 15 minutes as Giovanni Simeone leveled in the 67th. He then scored the winner five minutes from time with a screamer from 20 yards into the top corner.

Sassuolo also fought back, from two goals down, to draw 2-2 at Spezia. Giacomo Raspadori scored twice in the second half for Sassuolo.