Viktor Hovland made consecutive eagles and closed with consecutive bogeys while overcoming a six-shot deficit to win the Hero World Challenge on Sunday and keep Collin Morikawa from reaching No. 1 in the world.

So wild was this final round of the year for golf’s elite that Morikawa, who started the day with a five-shot lead, wasn’t even a factor over the last hour at Albany Golf Club.

Hovland closed with a 6-under 66 in his debut at a holiday event that was filled with pure chaos involving eagles and triple bogeys, none more bizarre than Jordan Spieth hitting his drive on the ninth hole from what was a new 17th tee for the final round. 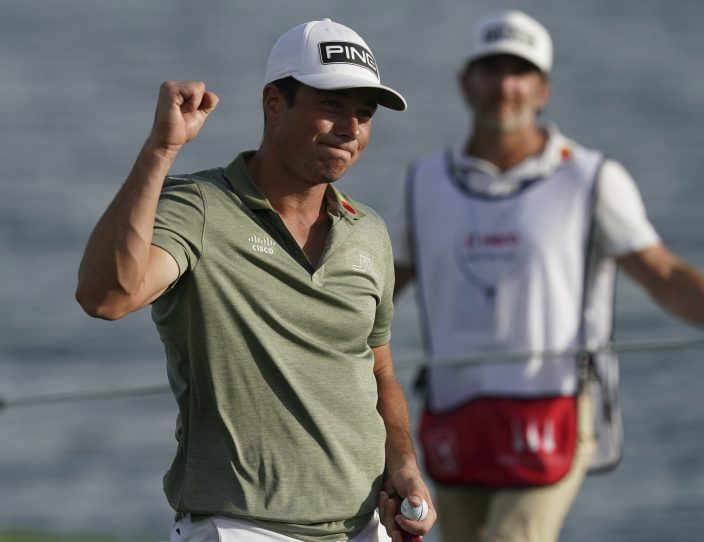 Ultimately, this was about another 24-year-old star in the making adding to a big year. It just wasn’t the one so many expected.

Morikawa, the British Open champion and first American to be No. 1 on the European Tour, missed three birdie chances from 10 feet or closer at the start of the round and then went sideways with two shots into the bushes at Nos. 4 and 6 that led to double bogeys and a 41 on the front nine.

He closed with a 76 and tied for fifth. A victory would have made him the 25th player to reach No. 1 in the world since the ranking began in 1986. That still belongs to U.S. Open champion Jon Rahm, who didn’t play this week.

Scottie Scheffler started seven shots behind, made a triple bogey on the fourth hole, and still rallied for a 66 to finish one shot behind.

Hideto Tanihara closed with a 1-under 69 to finish the double season on the Japan Golf Tour with a two-shot victory over Yusaku Miyazato in the Golf Nippon Series JT Cup.

Tanihara won for the second time in three weeks, giving him 16 career titles in Japan.

Takumi Kanaya, the former world No. 1 amateur, birdied the the 18th hole to finish alone in third. The result is projected to be enough for him to finish the year at No. 50 in the world and earn a spot in the Masters.

That would give three former Asia-Pacific Amateur champions a spot at Augusta National, along with Masters champion Hideki Matsuyama and top-ranked amateur Keita Nakajima.

Chan Kim, who played at Arizona State, won the Order of Merit that was determined over the 2020 and 2021 seasons because of the pandemic.

Daniel van Tonder birdied the par-5 closing hole for a 7-under 65 and a one-shot victory over hard-charging Oliver Bekker in the South African Open Championship. Bekker birdied his last three holes for a 66 at Gary Player Country Club. ... Phachara Khongwatmai of Thailand holed a 12-foot par on the final hole for an even-par 70 and a one-shot victory in the Laguna Phuket Championship for his first Asian Tour victory.