Cooper Kupp wasn't aware after the Los Angeles Rams' 37-7 thrashing of the Jacksonville Jaguars on Sunday that he had reached 100 catches. With the way the fifth-year receiver is piling up accomplishments in a career season, it is getting hard to keep track.

Kupp's 8-yard reception from Matthew Stafford early in the fourth quarter made him the first player in NFL history with at least 100 catches and 10 TDs receiving in his team’s first 12 games of a season.

“I didn’t know that,” said Kupp about his latest set of accomplishments after finishing Sunday's game with eight receptions for 129 yards and a touchdown as the Rams snapped a three-game losing streak. “At the end of day it is about getting a win. I just want to be part of producing and moving the team forward.” 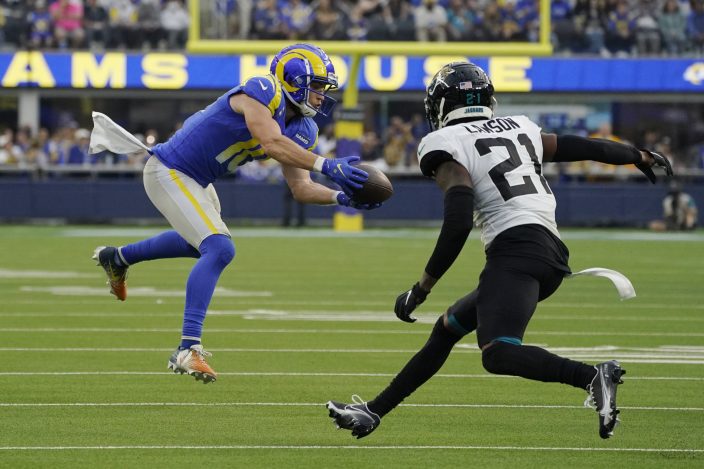 Kupp has done more than move his team forward. He leads the league in receptions (100), receiving yards (1,366) and 11 receiving TDs.

By reaching the century mark in catches, Kupp is the fourth player to do that in his team's first 12 games of a season, the second in the past three seasons. He is also the third receiver in the Super Bowl era with at least 1,350 yards at this point in the year.

Kupp was held without a catch until the first play after the two-minute warning in the opening half. He had three catches on that drive as Matt Gay kicked a 44-yard field goal to give the Rams a 16-7 lead at halftime.

“There's only so much we can do. He’s an amazing player and he’s going to go off. We contained him for as long as we could,” Jacksonville defensive lineman Dawuane Smoot said.

Early in the third quarter, Kupp extended the Rams advantage to 23-7 with a 29-yard touchdown. He beat Jaguars safety Andrew Wingard on a post route, caught it at the 20-yard line and coasted into the end zone.

“There’s a lot of stuff in this league that sometimes doesn’t work out for you. But like I’ve said before, there’s no panic from any of us if you’re not getting the ball early on, as long as we’re moving the ball,” Kupp said.

Kupp will go into the Dec. 13 Monday night game at Arizona with eight straight games of at least 90 yards or more. The record of nine is shared by teammate Odell Beckham Jr. and Pro Football Hall of Famer Michael Irvin.

In the Oct. 3, 37-20 loss to the Cardinals, Kupp was held to five receptions for 64 yards. He will need to perform at the level he has over the past eight games if the Rams (8-4) have any hopes of coming back to win the NFC West. Arizona is 10-2.

“I thought it was a great step in the right direction. There’s obviously been some adversity over these last three games," coach Sean McVay said. “It sure feels good to be back on the winning side of things and now we got to be able to build on it.”