Patrick Kane scored the only goal in the shootout and the Chicago Blackhawks beat the Islanders 3-2 Sunday night, sending New York to its 11th straight loss overall and its sixth straight setback its new arena.

Kane beat Semyon Varlamov with Chicago’s second shootout attempt, and Marc-Andre Fleury denied all three chances by the Islanders to secure the win.

The Islanders tied the game at 2-all with four seconds left in the third period on a goal by defenseman Noah Dobson. Jean-Gabriel Pageau also scored for the Islanders, who earned a point for the third straight game but fell to 0-9-2 in their losing streak. Varlamov finished with 24 saves.

Strome had put Chicago ahead 2-1 at 5:59 of the third with his second goal of the season, beating Varlamov with a high shot from the right faceoff circle. Alex DeBrincat and Erik Gustafsson assisted. 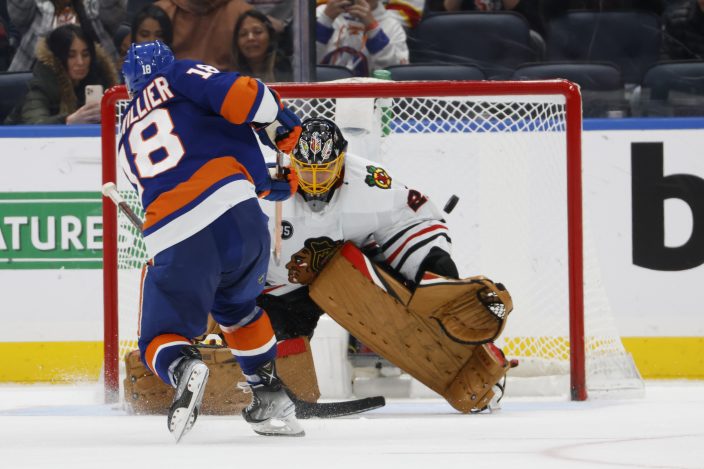 The last-place Islanders, missing leading scorer Brock Nelson and defenseman Ryan Pulock due to injuries, fell to 0-4-2 at UBS Arena as their winless streak reached 11 (0-8-3). The skid dropped their season record to 5-10-5.

The Blackhawks are 12-3-2 in their last 17 games against Islanders. 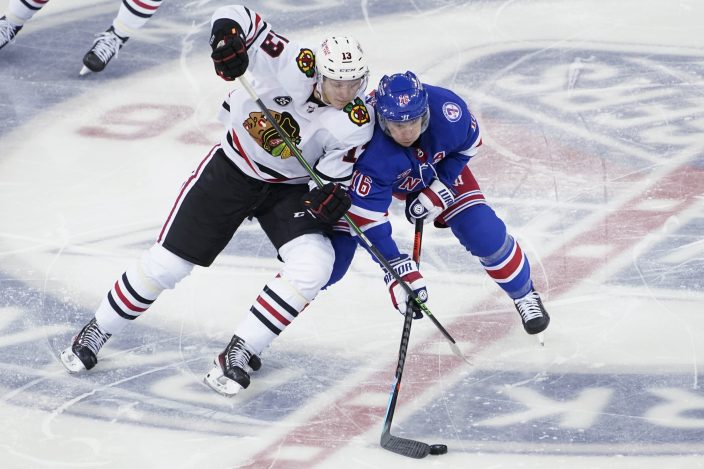 Hagel opened the scoring with a power-play goal, beating Varlamov at 6:49 of the first period with his eighth goal of the season. Assists went to DeBrincat and Seth Jones.

Jones, who had two assists in Saturday’s 3-2 loss to the Rangers, has 19 assists this season. Only Adam Fox of the Rangers has more assists among NHL defensemen, with 20.

Jones leads the Blackhawks in points with 22. Patrick Kane has 21 points, while DeBrincat, who scored both goals against the Rangers on Saturday, has 20 points. 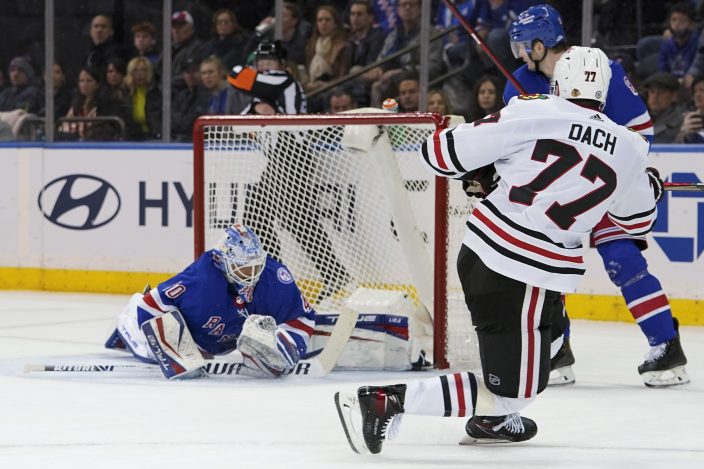 Chicago outshot the Islanders 10-8 in the first period.

The Islanders tied the contest at 8:03 of the second on a power-play goal by Pageau. Sebastian Aho and Mathew Barzal assisted. It was Pageau’s second goal of the season.

Pageau’s goal against Fleury gave the UBS Arena crowd — starved for a victory at the new arena — a chance to celebrate. 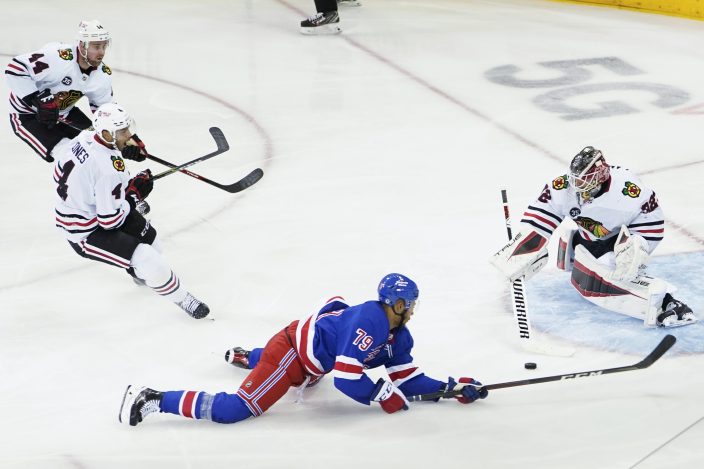 The Islanders held a 7-4 shots advantage in the second period, and couldn’t muster much in the third until Dobson’s heroics.

The Islanders had a power-play chance at 11:18 of third, but Fleury denied New York’s best chance, a blistering shot by Oliver Wahlstrom.

Fleury also denied a close-in shot by Adam Pelech with just over two minutes left, and chance by Wahlstrom with 58 seconds left with Varlamov pulled for an extra skater. 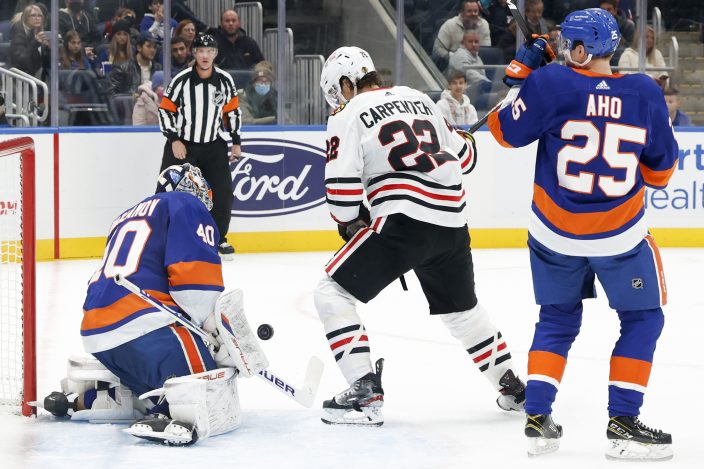 The Islanders, who were coming off a 4-3 overtime loss on Saturday at Detroit, haven’t won since Nov. 6, a 2-0 victory at Winnipeg.

The Islanders beat Blackhawks 4-1 at United Center on Oct. 19. 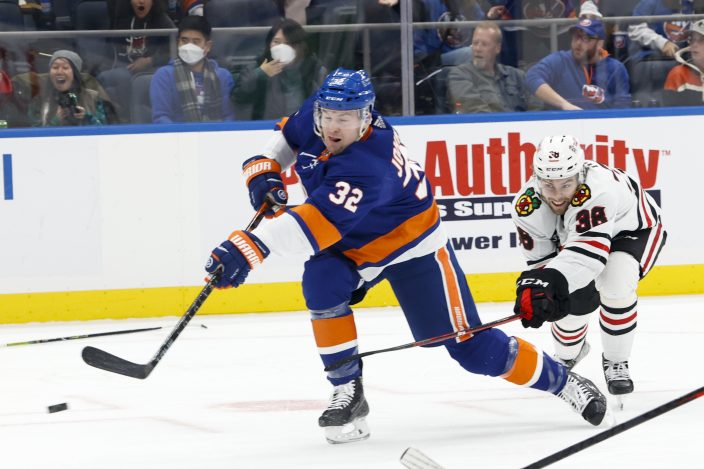 The Islanders will not leave the Eastern time zone until Jan. 4 when they head to Seattle. New York will not spend consecutive nights on the road at any point. By the time the Islanders hit the Olympic/All-Star break, they will have played 25 of their 47 games at home. 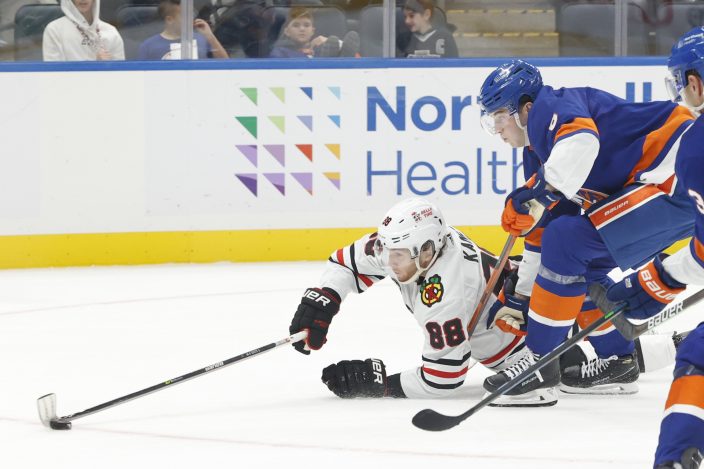 NOTES: The Islanders scratched forwards Matt Martin and Otto Koivula, plus defenseman Robin Salo. They continued to be without center Casey Cizikas in COVIVID-19 protocol. … The Blackhawks scratched defensemen Conor Murphy and Jake McCabe and forward Mike Hardman. … Chicago’s interim head coach Derek King scored 211 goals and had 288 assists in 638 games with the Islanders, including a 40-goal season in 1991-92.

Islanders: At Ottawa Senators on Tuesday.

Suspended game in Spain to resume without injured playe ...