England captain Joe Root chose to keep his likely playing 11 under wraps and was guarded on his intentions if he wins the toss when he spoke Monday for the last time before the first Ashes cricket test against Australia.

Root addressed reporters before news broke that the fifth test of the series will now not go ahead in Perth because of concern over quarantine requirements. 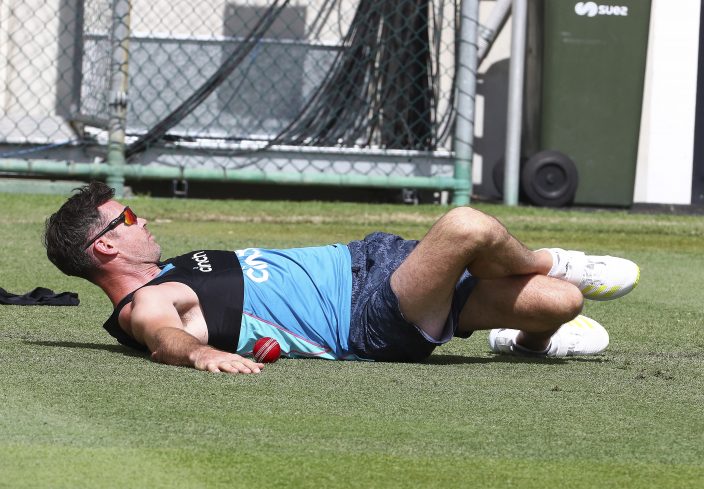 England's James Anderson stretches during their training session at the Gabba ahead of the first Ashes cricket test in Brisbane, Australia, Monday, Dec. 6, 2021. (AP PhotoTertius Pickard)

Cummings revealed that Travis Head had edged Usman Khawaja for the final place in Australia’s top order and that veteran paceman Mitchell Starc will play ahead of Jhye Richardson.

Root skirted issues around the makeup of his batting and bowling lineups. He chose not to discuss whether Haseeb Hameed might retain his place in England’s top three or whether Jonny Bairstow or Ollie Pope might bat at No. 6. Nor did he address the question of whether veteran quicks James and Stuart Broad both might play.

Root denied he was indulging in “mind games” in delaying his team announcement in the face of Australia’s clarity. 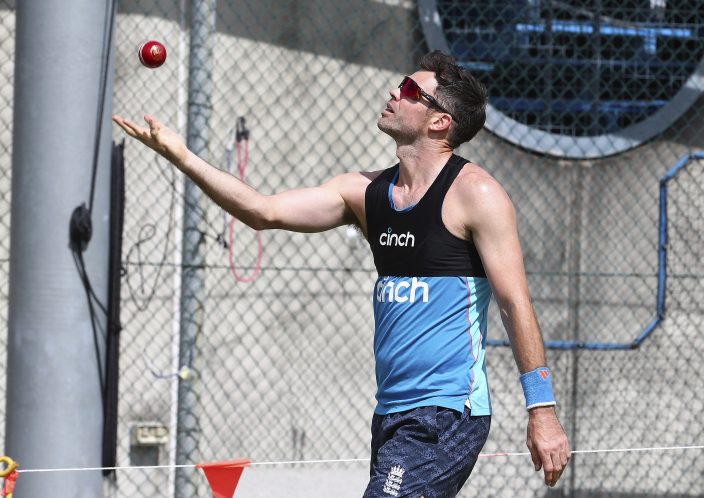 England's James Anderson prepares to bowl during their training session at the Gabba ahead of the first Ashes cricket test in Brisbane, Australia, Monday, Dec. 6, 2021. (AP PhotoTertius Pickard)

“I’m not into mind games,” Root said. “I’m just not in a position right now to name our team.

“The fact they’ve named their 11 doesn’t really concern me or change anything from our perspective. We’ll conduct our business how we want to and let you know when we’re ready.”

Root said he had not yet seen the Gabba pitch and couldn’t venture a view on whether he might bowl first if he wins the toss Wednesday. He received the news from an Australian journalist that the pitch looks green, as nothing more than one might expect with a fast bowler as Australia’s captain.

“Pat’s already put a stamp on things as a fast bowler and captain of Australia,” Root said.

"We’ll have a look and if it’s green, let’s see how it looks again tomorrow and on the morning of the game. I’ve not got any clear idea of what I want to do at the toss as yet. We’ll leave that as late as possible.”

Root was more effusive on the form and fitness of Stokes, who serves as a talisman for the England team and will likely play after a limited buildup. Stokes took 2-31 and scored an unbeaten 42 in a match against the England Lions which was his first significant outing since July.

“I think more than anything it will really be good to see Ben back involved in the frame of things,” Root said.

“I think there will be an element of managing expectations and you’ve got to trust his experience. You always know that when he gets into that game he’ll want to put his mark on it and put his stamp on it.”

Meanwhile, Cricket Australia on Monday confirmed the fifth test no longer will be played in Perth. The governing body said bio-security requirements, which would have required players to quarantine on arrival in Western Australia, were too difficult to overcome.

An alternative venue hasn’t yet been named but Hobart in Tasmania may be the front-runner. Queensland, Victoria and New South Wales states, along with Australian Capital Territory also have expressed interest in hosting the match.

“We are very disappointed that we are unable to stage the fifth men’s Ashes Test at Perth Stadium,” Cricket Australia chief executive Nick Hockley said. “We did everything we could in partnership with the WA Government and WA Cricket to make it work under the current border and health arrangements. But unfortunately this was not possible.”

Earlier, the South Australia Cricket Association said the second test will go ahead in Adelaide next week as scheduled, rebuffing a late call from Western Australia to swap the second and fifth tests.

Western Australia officials suggested the England and Australia players could fly directly to Perth from Brisbane after the first test, avoiding quarantine.