Japan confirmed on Monday its third case of the new omicron variant — a traveler entering from Italy — as Prime Minister Fumio Kishida vowed to take strict measures based on a worst-case scenario of a possible resurgence of infections.

Japan has seen a sharp drop in daily COVID-19 cases since September.

Chief Cabinet Secretary Hirokazu Matsuno told reporters that the third confirmed case of the omicron strain is a man in his 30s who tested positive upon arrival from Italy at Tokyo's Haneda airport on Dec. 1 and has since been isolated. 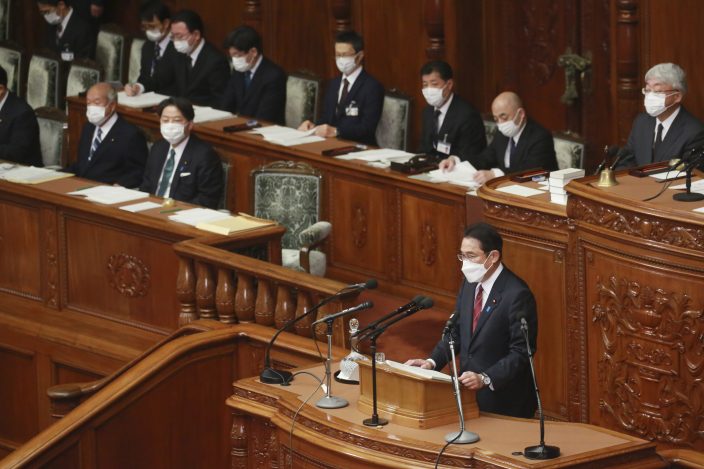 Japanese Prime Minister Fumio Kishida delivers his policy speech during an extraordinary Diet session at the lower house of parliament in Tokyo, Monday, Dec. 6, 2021. Japan confirmed on Monday its third case of a new variant of the coronavirus from an entrant from Italy, as the Prime Minister Fumio Kishida vowed to get prepared based on a worst-case scenario in dealing with a next resurgence. (AP PhotoKoji Sasahara)

Kishida said in a policy speech before Parliament that he is taking no risks after previous criticisms that Japan was too relaxed in its anti-virus measures.

Authorities already confirmed two cases of the omicron variant in travelers who arrived to Japan in late November — leading Kishida's government to ask international airlines to stop taking new bookings, before quickly withdrawing the request after facing massive criticisms for going too far. Japan has virtually banned all foreign entrants as an emergency precaution.

Also Monday, Japan's trade and industry ministry announced that a U.N. nuclear agency team's planned visit to the Fukushima Daiichi nuclear power in mid-December has been postponed until next year due to the new variant concerns. The team was to assess preparations ahead of a 2023 release of treated radioactive water from the wrecked plant into the sea.

The discharge plan has faced fierce local opposition as well as criticism from Japan’s neighbors, including China and South Korea. Japan has requested the International Atomic Energy Agency's assistance to ensure the discharge meets safety standards and to gain the understanding of the international community.

A massive earthquake and tsunami in 2011 severely damaged three reactors at the Fukushima plant, causing contaminated cooling water to leak. The plant's operator says tanks storing the water will be full late next year.

Japanese officials say the disposal of the water is required for the plant cleanup.

Japan to extend virus measures in Tokyo and other areas