Montana is asking the U.S. Fish and Wildlife Service to lift threatened species protections for grizzly bears in the northern portion of the state, including areas in and around Glacier National Park, officials said Monday.

Removing federal protections would give state wildlife officials more flexibility to deal with bears that get into conflicts, Montana Gov. Greg Gianforte said. But wildlife advocates warned of overhunting if protections are lifted. 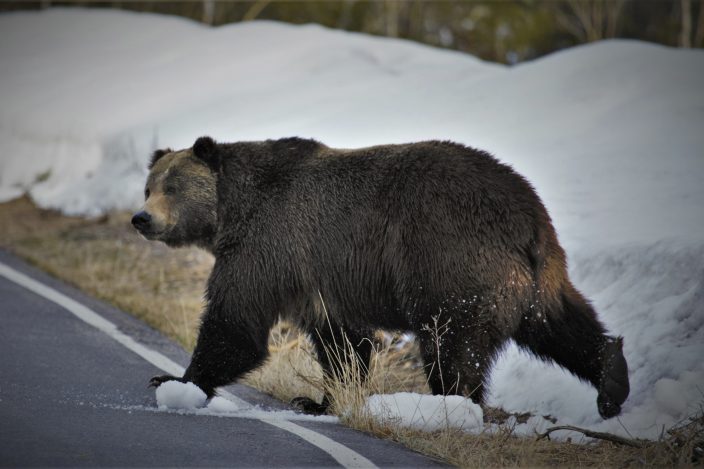 In this undated photo provided by the U.S. Fish and Wildlife Service is a grizzly bear just north of the National Elk Refuge in Grand Teton National Park, Wyo. Grizzly bears are slowly expanding the turf they roam in the northern Rocky Mountains but scientists say they need continued protections, They have also concluded that no other areas of the country would be suitable for the fearsome animals. The Fish and Wildlife Service on Wednesday, March 31, 2021, released its first assessment in nearly a decade on the status of grizzly bears in the contiguous U.S. (Joe LiebUSFWS via AP)

Northwest Montana has the largest concentration of grizzlies in the Lower 48 states, with more than 1,000 bears across an area that includes Glacier National Park and large expanses of forested wilderness.

In March, U.S. government scientists said the region's grizzlies are biologically recovered, but need continued protection under the Endangered Species Act because of human-caused bear deaths and other pressures.

Hunting of grizzlies is banned in the U.S. outside Alaska. Bears considered problematic are regularly killed by wildlife officials.

“We’ve shown the ability to manage bears, protect their habitat and population numbers," Montana Fish, Wildlife and Parks Director Hank Worsech said in a statement. "It’s time for us to have full authority for grizzly bears in Montana.”

But wildlife advocates cautioned against giving the state control over grizzlies, after Republicans including Gianforte have advanced policies that make it much easier to kill another controversial predator, the gray wolf.

“We don't believe that there should be hunting of these iconic, native carnivores,” said environmentalist John Horning with the group WildEarth Guardians. “I have no doubt the state would push it to the absolute limit so they could kill as many grizzlies as possible.”

The Fish and Wildlife Service had not yet received the state's petition and had no immediate comment, spokesperson Joe Szuszwalak said.

Interior Secretary Deb Haaland, who oversees Fish and Wildlife Service, co-sponsored legislation while in Congress to increase protections for bears and reintroduce them on tribal lands. Haaland declined to say how she would approach the issue when questioned during her February confirmation hearings.

As many as 50,000 grizzlies once ranged the western half of the U.S. Most were killed by hunting, trapping and habitat loss following the arrival of European settlers in the late 1800s. Populations had declined to fewer than 1,000 bears by the time they were given federal protections in 1975.

Protections were removed for more than 700 bears in and around Yellowstone National Park in 2017, but later restored by a federal judge.

Wyoming Gov. Mark Gordon said in September he will ask the federal government to remove protections for Yellowstone region grizzlies and permit the region’s three states to manage and potentially allow hunting of the big bruins in certain areas.

Friday will never be the same agai ...