The Tampa Bay Buccaneers know how difficult the road to the Super Bowl can be. That’s why the defending champions are determined to give themselves a better shot at repeating by earning home-field advantage for the playoffs.

At 9-3, the Bucs have a commanding four-game lead over Carolina, Atlanta and New Orleans in the NFC South with five games remaining.

While the team’s first division title since 2007 would guarantee at least one home game in the postseason, coach Bruce Arians and his players want more after defying the odds of winning it all as a wild-card team last season. 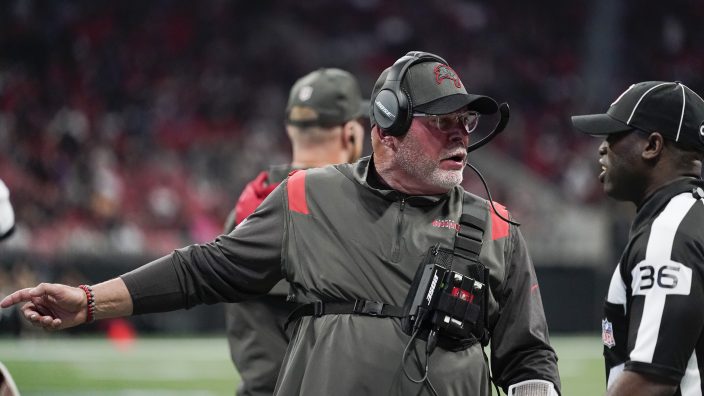 Tampa Bay Buccaneers head coach Bruce Arians speaks with an official during the second half of an NFL football game against the Atlanta Falcons, Sunday, Dec. 5, 2021, in Atlanta. (AP PhotoBrynn Anderson)

Sure, Tampa Bay became the first team to win a Super Bowl played in its home stadium last February. But to do it, the Bucs first had to win three consecutive playoff games on the road as a No. 5 seed.

Four of the team’s remaining five games are against opponents that currently have losing records, however Arians cautions the reigning champs aren’t in a position to take anything for granted.

“You don’t really talk about it. You start thinking about January, you’re going to get ... beat and you’ll wind up playing on the road, for sure,” the coach said.

“It’s take care of every day’s business one at time ... and add them all up at the end,” Arians continued. “But everybody knows how important that is. We’re sitting at the three-seed right now. Each win, each game really matters. It’s fun.”

The 2020 Bucs were the seventh wild-card in league history to win the Super Bowl. Arians also was an assistant coach with Pittsburgh when the 2005 Steelers won the title as a wild-card.

Sunday’s 30-17 victory at Atlanta improved Tampa Bay’s record to 4-3 on the road compared to 5-0 at home this season.

“We have to clean everything up. We are not perfect by any means and don’t claim to be,” quarterback Tom Brady said. “We show up to work every day and try to be the best we can be. We haven’t played our best game yet, so hopefully we can do that this coming week.”

The Bucs have scored 30 or more points seven times, going 7-0 in those games. Including playoffs, they’ve scored 30-plus a league-leading 19 times since Brady’s arrival in 2020. They’ve scored 377 through 12 games this year, their highest-ever total at this point in a season.

The defense tightened against run and held the Falcons scoreless after halftime Sunday, though not before defensive coordinator Todd Bowles shared some choice words with the team at halftime. The Bucs led 20-17 at the break, however Atlanta had 101 rushing on 13 carries before Bowles’ fiery address. The Falcons ran for just 20 yards on 10 attempts the rest of the way.

With starting cornerbacks Sean Murphy-Bunting and Carlton Davis back in the lineup after missing significant time with injuries, the Bucs are feeling better about the prospect of the secondary hitting its stride.

Despite ranking in the top 10 statistically and shutting down Atlanta after giving up 10 points early, the reigning champs are striving for more consistency on defense. Among the areas they’ve shown improvement the past three games, though, are penalties and third-down efficiency.

Although cornerback Jamel Dean is in the concussion protocol and defensive lineman Will Gholston has “a little patellar tendon issue,” Arians was hopeful “we didn’t lose anybody for this next ballgame.” Long snapper Zach Triner, meanwhile, was placed on the reserve/COVID-19 list Monday.

Buffalo, the lone team the Bucs will face over the next five weeks that currently has a winning record, visits Raymond James Stadium on Sunday.