After stumbling through a 7-9 season last year while watching Tom Brady win a seventh ring in his first season with the Tampa Bay Buccaneers, Bill Belichick's squad is once again the class of the AFC. 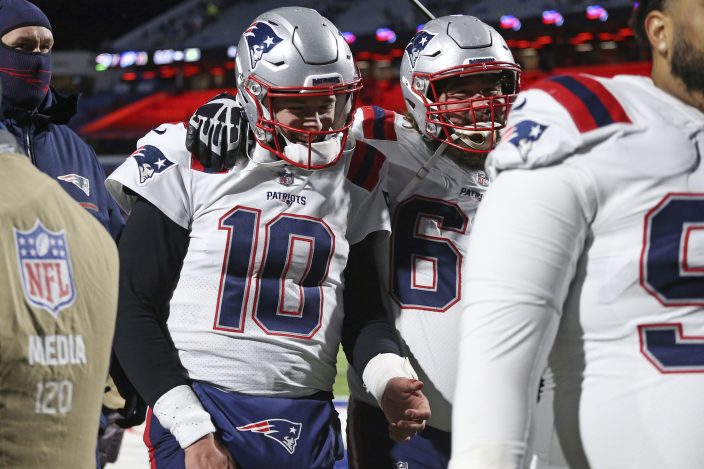 New England Patriots quarterback Mac Jones (10) and David Andrews (60) walk off the field after getting a win over the Buffalo Bills in an NFL football game in Orchard Park, N.Y., Monday, Dec. 6, 2021. (AP PhotoJoshua Bessex )

Behind those 46 runs in 49 snaps, the retooled Patriots won their sixth road game in six tries and pushed their winning streak to seven games, improving to 9-4.

That's a half-game better than the Kansas City Chiefs, Tennessee Titans and Baltimore Ravens in the logjammed conference race.

And the Patriots are still finding ways to shut down Peyton Manning, who lost his head-to-head series with Brady 11-6.

The quarterback who was inducted into the Pro Football Hall of Fame four months ago explained on ESPN's “ManningCast” during the Patriots-Bills slog-fest that the Patriots public relations politely declined his request to interview Jones.

“Well, I tried to talk to Mac Jones, and he was very respectful,” Manning relayed. “He said, ’Peyton, I want to do it, but can you call our PR director, Stacey (James)? Because he kind of has to oversee all things. I said, ‘No problem.’ I called Stacey, very professional, I said, ‘Stacey, I’m talking to Coach Belichick, can I talk to Mac Jones?’"

The answer was no, although Manning took the rare rejection in stride.

“And I gotta tell you, I appreciate how they’re handling Mac Jones. They are trying to protect him, give him as few off-the-field distractions as possible, let him concentrate on playing football," Manning said.

“So, yes, I did get denied. It was the first quarterback I haven't talked to. But, I appreciate it,” Manning said.

Although Manning isn't accustomed to getting turned down, he said he understood what the Patriots were doing because he encountered the same treatment during his rookie season in Indianapolis in 1998.

“Bill Polian, as a rookie with me with the Colts, did the same thing. He didn’t let the marketing department talk to me, the community relations department talk to me. He said, ‘Hey, it’s all football this first season. Don’t bother him,'" recounted Manning. "And I think the Patriots are taking that same approach with Mac Jones and it’s paying off, it’s working.”

Everything's working in New England a year after the Patriots stumbled behind aging QB Cam Newton.

New England has a two-win edge over the Bills (7-5) in the AFC East standings a year after they were swept by the Bills in losing their division for the first time since 2008.

Now, the Patriots get a Week 14 bye a week before closing out with a visit to Indianapolis followed by a rematch with the Bills at Gillette Stadium on Dec. 26, another home game against the upstart Jacksonville Jaguars and a road game at resurgent Miami.

They have the smoothest path to the lone bye that goes to the AFC's top playoff seed and home field throughout the playoffs, something they've usually parlayed into Super Bowl appearances.

Belichick is the only person on the planet who owns more than Brady's seven Super Bowl rings. They won six together in Foxborough and Belichick won two as Bill Parcell's right-hand man with the New York Giants before that, giving him eight titles to go with four runner-up finishes.

Although the NFC features Brady's Bucs, Prescott's Cowboys, Aaron Rodgers' Packers, Kyler Murray's Cardinals and Matthew Stafford's Rams, would anyone be surprised if Belichick won his ninth overall ring a year after Brady won his seventh?