Tiger Woods kept everyone guessing at the Hero World Challenge with weekend range sessions that got as much attention as the two eagles Viktor Hovland made in his comeback victory.

What's next? Only he knows.

It started two weeks ago with a three-second video of one swing from a short iron and the message, “Making progress.” In his first news conference since the February car crash in Los Angeles that damaged his right leg, Woods painted a less optimistic picture. 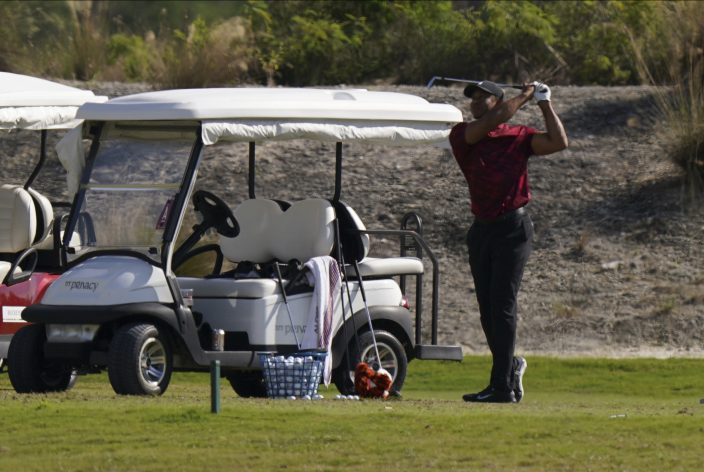 His answer to one query last Tuesday was that his leg and lower back hurt just sitting there. He spoke of his comeback from fusion surgery that culminated with his 2019 Masters victory, and later the Zozo Championship for his record-tying 82nd win on the PGA Tour.

“I don’t see that type of trend going forward for me. I won’t have the opportunity to practice given the condition of my leg and build up. I just don’t,” he said. “I’ll just have a different way of doing it and that’s OK and I’m at peace with that. I’ve made the climb enough times.”

Later that day, the PGA Tour captured video of Woods hitting a 3-wood on the range at Albany. On Friday, he was hitting wedges. On Saturday, word arrived that he had a “big bucket.” Woods was on the back end of the range hitting drivers. And then on Sunday — in a red shirt, for the trophy presentation later in the day — he was hitting drivers again. 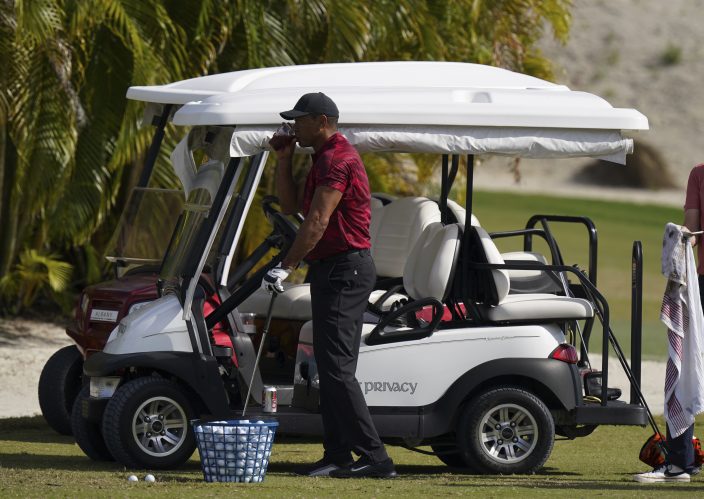 That fueled speculation that Woods could be playing next weekend in the PNC Championship with 12-year-old son Charlie. They played last year and toward the end, Woods wasn't even hitting tee shots. His son was at a forward tee, and while no one knew it at the time, Woods was preparing for a fifth back surgery.

The Dec. 18-19 tournament in Orlando, Florida, is holding a spot for him. Carts are allowed with the majority of the field comprised of players from the PGA Tour Champions, which sanctions the event. As one person close to Woods jokingly said, “Charlie might be the pro in the group.”

No matter. Woods playing would be a remarkable return from injuries that he said nearly led to amputation. A decision could come by the end of the week. 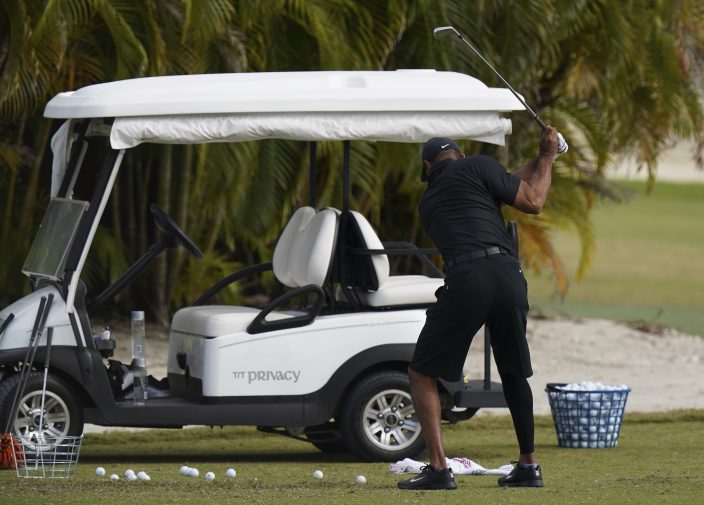 Tiger Woods takes a swing during a practice session at the Albany Golf Club, on the sidelines of day three of the Hero World Challenge Golf tour, in New Providence, Bahamas, Saturday, Dec. 4, 2021. (AP PhotoFernando Llano)

The U.S. Golf Association nominating committee has proposed Fred Perpall to be president-elect, which would make him the first Black president in the 128-year history of the USGA.

Stuart Francis was nominated to serve the third and final year of his term as president. The formal election is Feb. 19 in Carlsbad, California. 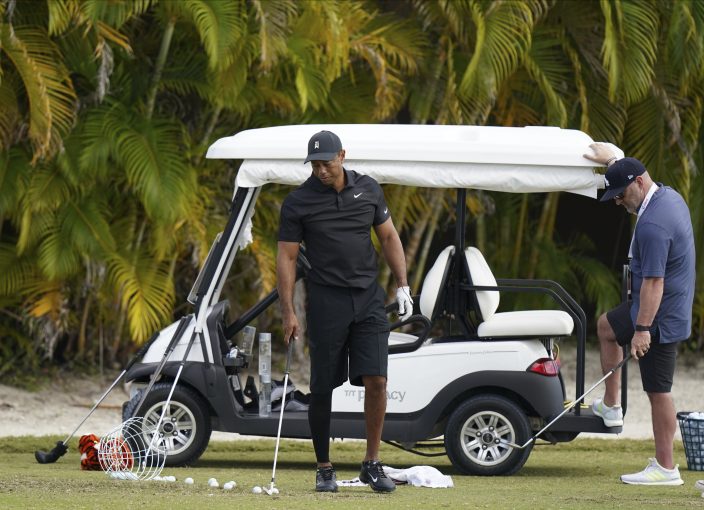 Perpall is a native of the Bahamas and lives in Dallas, where the registered architect is CEO of The Beck Group. He played basketball and ran track at the University of Texas at Arlington and played for the 1994 Bahamian national basketball team.

He is completing his third year on the USGA executive committee, where he chairs the championship committee and serves on the amateur status committee. 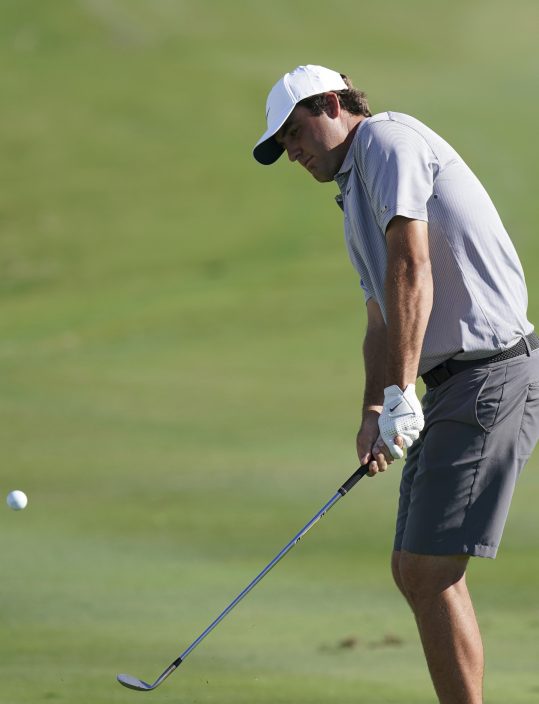 Scottie Scheffler, of the United States, chips on to the 9th green during a Pro-Am tournament ahead of the Hero World Challenge PGA Tour at the Albany Golf Club, in New Providence, Bahamas, Wednesday, Dec. 1, 2021.(AP PhotoFernando Llano)

The World Golf Hall of Fame has confirmed its induction ceremony will be March 9 during The Players Championship at the PGA Tour’s new headquarters. The four to be inducted are Tiger Woods, Susie Maxwell Berning, Tim Finchem and the late Marion Hollins.

To get in the mood, the Hall of Fame opened an exhibit over the weekend of artifacts and personal items from the new inductees.

For Woods, that included his red mock turtleneck and his player credential from the 2019 Masters, his fifth win at Augusta and 15th major. Also on display is a plaque from Woods’ first hole-in-one when he was 6. It was on the 12th hole at Heartwell Golf Park in Long Beach, California. 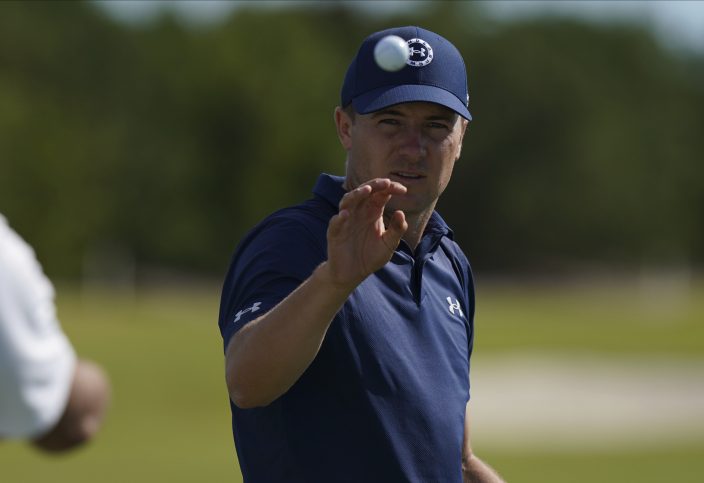 The plaque includes the golf ball he used: Top-Flite 7.

The Hero World Challenge is a 20-man field of elite players with no cut and chill atmosphere in the tropical weather of the Bahamas. That doesn’t mean it’s always smooth sailing. 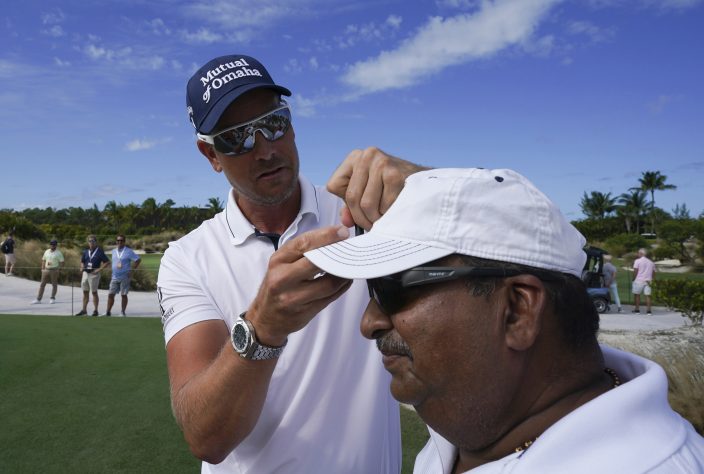 Henrik Stenson, of Sweden, signs autographs for fans before the first round of the Hero World Challenge PGA Tour at the Albany Golf Club, in New Providence, Bahamas, Thursday, Dec. 2, 2021.(AP PhotoFernando Llano)

Jordan Spieth and Henrik Stenson were involved in the latest rules issue. The tee from the par-3 17th was moved to the teeing ground used on No. 9 all week, and as the first group off and going through the motions, they started the ninth hole from the 17th tee. They had to do play it over and add two shots to the score.

“I didn’t think we were going to get penalized because it’s a charity event,” Spieth said with a grin.

There was no charity the last time at Albany in 2019. Patrick Reed was in a waste area short and left of the green on the par-5 11th when he scooped sand away from the front of his ball before taking the shot.

That became a penalty after his round for improving his lie. What it didn’t improve was his reputation. It followed him to Australia for the Presidents Cup and probably would have lingered if not for the shutdown from the pandemic.

The year before that? Tiger Woods playing a remarkable shot from the base of a bush, his right knee on the ground and his left knee extended. He didn’t take much of a backswing, raising questions whether he scooped it. In high-def replays, officials determined he did not, but he did hit the ball twice.

Of course, the oddities aren’t relegated to Albany.

Think back to Sherwood some 20 years ago, when two men slipped into the locker room during the pro-am dinner and walked off with equipment, including three wedges belonging to Woods.

Rich Beem nearly interrupted the heist when the men heard someone coming and starting playing pool. Beem joined them, even picking up a wedge and thinking it looked like a great pro-am gift. Too bad he didn’t inspect it closer to see “TW” stamped on the bottom.

The men were caught, but never charged, and the equipment returned.

Brooks Koepka is feeling healthy enough to work in a trip to Montana during the short offseason to go skiing, which he describes as one of his passions.

Also planning a trip to Montana with his family is Henrik Stenson, which comes naturally to the Swede.

Who’s more likely to get hurt?

Stenson laughed at the question when he heard who else was going before offering a confession.

He was skiing with the family, going slowly when he checked on his son, Karl.

“I caught an edge,” Stenson said.

He fell forward and landed on his ribs, which wasn’t the best feeling. In fact, he said they were still sore during his run through The Players Championship and Masters.

Matthias Schmid, who played college golf at Louisville, has won the Sir Henry Cotton Award as rookie of the year on the European tour. He is the first German to win the award since Martin Kaymer in 2007. ... Justin Thomas is returning to defend his title in the PNC Championship with his father, Mike, a longtime club professional. ... Adam Scott is the latest player to join with the American Junior Golf Association to host a junior event. It will be 78 players selected by the AJGA, Japan Golf Association and Golf Australia at Ridge Golf Club in Los Angeles on Feb. 18-21, the same week as the Genesis Invitational at Riviera. ... Four players outside the top 100 at the start of the year will finish inside the top 50 — Sam Burns, Max Homa, Min Woo Lee and Takumi Kanaya.

Scottie Scheffler earned 260.625 world ranking points this year, the most of any player without winning a tournament.

“You’re only as good as your last hole.” — Jordan Spieth, after a 76 in his final round of 2021 at the Hero World Challenge that featured a double bogey and two triple bogeys. He finished with a birdie.