No, it's not a Pro Bowl ballot, just a smattering of the big names that have landed on the NFL's ever more crowded reserve/COVID-19 list this season. 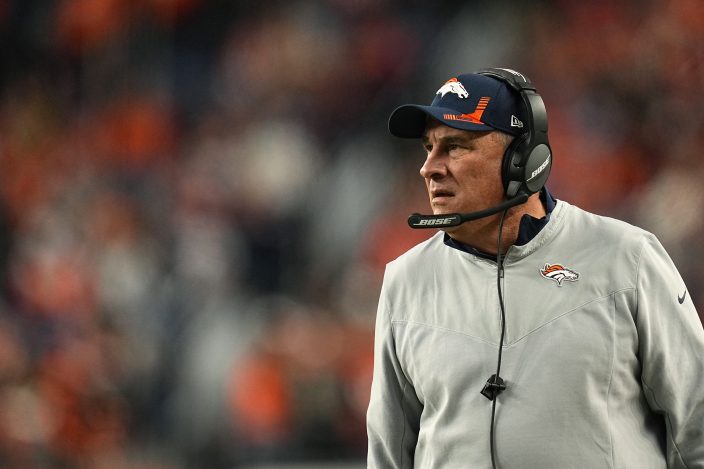 Like any fan setting a fantasy roster, filling out a betting sheet or just cheering on their team, Denver Broncos coach Vic Fangio can't help but raise an eyebrow or two at the relentless stream of stars popping up on the virus list, landing themselves in quarantine and their teams in a conundrum.

"You notice it, obviously, and you know it can happen to you. It's not just, ‘Well, that’s their problem," Fangio said Monday as three dozen players across the league were being added to the reserve/COVID-19 list either because they contracted the virus or were close to someone who did.

FILE - Seattle Seahawks head coach Pete Carroll walks on the field before an NFL football game against the San Francisco 49ers, Dec. 5, 2021, in Seattle. The NFL is requiring players, coaches and other team personnel to receive a COVID-19 booster by Dec. 27. In a memo sent to teams on Monday, Dec. 13, 2021, and obtained by The Associated Press, the league said: “Given the increased prevalence of the virus in our communities, our experts have recommended that we implement the CDC’s recommendation.” (AP PhotoElaine Thompson, File)

Among the 36 fresh additions to the list on Monday were Jalen Ramsey and Tyler Higbee, who missed the Los Angeles Rams’ 30-23 win at Arizona that tightened the NFC race.

“It could end up being our problem just like last year — if you remember — when we were on the wrong side of New England’s problem,” Fangio said. "We lost our bye and had our game got postponed. I told the team, ‘Hey, it could come our way at some point.’

Last year, the league made the Broncos play a game without a quarterback because all four of theirs were quarantined after one of them came down sick with COVID-19 and the rest were deemed close contacts.

NFL owners breathed a huge sigh of relief when they got through the entire 2020 regular and postseason without a cancellation — and the league was thankful Tom Brady didn't get sick until after he'd won his seventh Super Bowl.

Even with vaccinations available this season, there are more than 100 players who have refused to get jabbed, putting themselves and their teams at risk down the stretch and into the playoffs.

If a vaccinated player gets a breakthrough case of COVID-19, he can return to action as soon as he's asymptomatic and has two negative tests 24 hours apart. Unvaccinated players who get sick have to sit out a minimum of 10 days as Rodgers, the league's reigning MVP, had to do last month.

The league says the vaccination rate among players is over 94.3%, which still leaves about 126 of the 2,208 players on 53-man active rosters and 16-man practice squads unvaccinated and therefore subject to stricter protocols such as daily nasal tests and a prohibition from interacting with teammates in the locker room or even on their own time away from work.

Last summer, more than two dozen Pro Football Hall of Famers teamed up as part of a community outreach and education program to help build COVID-19 vaccination confidence in the general public.

They also had a message for NFL players who didn't want to get vaccinated.

“We’re very fortunate to play a sport, a game, and get paid extremely well for it. And here in America the one thing we deem very necessary is our freedom of choice,” said Rod Woodson, class of 2009. "And they do get to exercise that freedom by not getting vaccinated.

“But the one thing I love that the NFL did this year was to say, OK, you’re exercising your freedom not to get it, well we’re going to exercise our freedom as a company. If you cause a game to be canceled, first of all you’re going to forfeit that and then we’re going to fine you. And nobody gets paid on either team on top of that.”

With nearly 19 of every 20 players fully vaccinated, that looks very unlikely to happen over the final month. Instead, teams and their fan bases have paid the price when their superstars get sick, like when Rodgers had to miss the Packers' showdown at Kansas City last month and understudy Jordan Love stumbled in his first NFL start.

Many teams like Fangio's are taking all the precautions they can as an unprecedented two dozen franchises race toward Christmas with a realistic shot at the playoffs next month.

“The offense is meeting over in the indoor (facility) so they can be spread out. The defense is over here” in the team's main headquarters, Fangio said. "But they’re in the big rooms, so they’re spread out. We don’t have to do that, but we’ve been doing that for a good bit right now. We’ll see where it goes this next day or two. We may have to do more.”

The Broncos are among a handful of teams who've had 10 or more players from their 53-man roster land on the reserve/COVID-19 list this season. Others with big numbers include the Cowboys, Vikings, Titans, Browns and Jets.

Among those with the lowest numbers of players on their 53-man roster landing on the virus list are the Seahawks, 49ers, Raiders, Colts and Jaguars.

The NFL announced Monday it is requiring coaches, front-office staff and team personnel to receive a COVID-19 booster by Dec. 27.

The league’s requirement extends to all Tier 1 and Tier 2 individuals who have previously received the vaccine. Though players are in the Tier 1 designation along with coaches and trainers, the mandate doesn’t apply to players because discussions with the NFL Players Association are ongoing.

Still, it's a stark reminder than this pandemic isn't over yet, and the league remains on high alert to anything that will thwart a champion from being crowned at Super Bowl 56 in Los Angeles two months from now.