The former sixth-grade math teach is going back to school.

That would be Michael Greller, who left his old job to caddie for Jordan Spieth in 2013. At Spieth’s request, Greller has been studying up on AimPoint, the methodology of reading greens that starts with using feet to feel the slope of the green and then holding up fingers for each percent of slope.

Among those who use it are Dustin Johnson and his brother, Austin, whom other caddies say has mastered the technique. 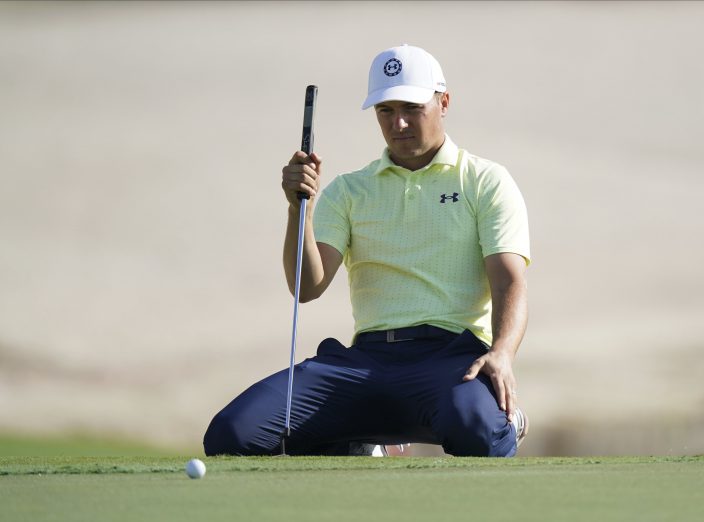 Jordan Spieth, of the United States, lines up his putt on the 17th green during the second round of the Hero World Challenge PGA Tour at the Albany Golf Club, in New Providence, Bahamas, Friday, Dec. 3, 2021.(AP PhotoFernando Llano)

Spieth said Greller met with John Graham, the putting coach for Justin Thomas, for a crash course. And he has been talking to Austin Johnson.

Never mind that Spieth already is among the best with the putter.

“I told him I try to look for an edge,” Spieth said. “It would be cool to gain a little edge by learning a skill you don’t have. In the past I would do Trackman seminars, stuff that here or there could mean a stroke.” 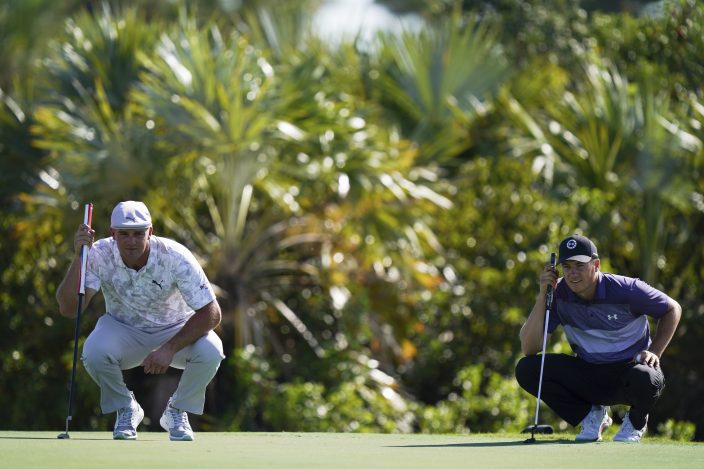 Bryson DeChambeau, left, and Jordan Spieth, of the United States, study their putt lines during the first round of the Hero World Challenge PGA Tour at the Albany Golf Club, in New Providence, Bahamas, Thursday, Dec. 2, 2021.(AP PhotoFernando Llano)

Spieth said he doesn’t use AimPoint and described his putting as more instincts than anything technical. That said, his description of his 50-foot eagle putt on the 15th hole at Royal Birkdale when he won the 2017 British Open sounded like more than instincts.

He said in 2017 about that putt, “I knew it was going to bend a little bit to the right as it went down off the slope to the bunker, and then when it gets to the valley, the hole is on a 3-degree slope going the other way, into and off the right, so it’s going to be a downhill left-to-right, and then it double breaks into uphill right-to-left.”

Spieth laughed when reminded of that description.

“What I was trying to explain is it was a significant double-breaker,” he said.

Emma Talley is geared so much toward charity that she once flew to Puerto Rico to join PGA Tour players and help raise money for hurricane relief efforts despite not having any connection to the Puerto Rico Open.

Her latest effort has hit way too close to home.

Talley, a former U.S. Women’s Amateur and NCAA champion at Alabama, shared a GoFundMe link for tornado relief efforts in her native Kentucky. She posted a vivid image Monday on Instagram of the destruction in Princeton, the small town where she was raised.

“It got beat up by the tornado a few days ago. My mom says it is way worse than the pictures,” Talley wrote. “So many of our friends lost EVERYTHING. My parents have been going through rubble of friends homes to try and find sentimental items.”

Talley, who finished 70th on the LPGA Tour money list and reached the CME Group Tour Championship this year, is getting plenty of support from her peers. Justin Thomas grew up in Louisville and played junior golf with Talley, who at 27 is one year younger.

“Every cent/dollar helps,” Thomas wrote in sharing he link.

Ryan Alford was a high school teammate of Sam Burns in Louisiana, and they might be competing again, this time on a bigger stage.

Alford received one of two Advocate Professional Golf Association exemptions to play in the Farmers Insurance Open, as the tour geared toward providing a path for minorities is starting to take root. The other went to Kamaiu Johnson, who was supposed to play at Torrey Pines last year until a positive COVID-19 test.

Alford learned to play from his father and took part in the First Tee Northwest Louisiana in Shreveport, eventually representing the chapter in the Pure Insurance Championship at Pebble Beach in 2011. He and Burns, a two-time PGA Tour winner this year, played at Calvary Baptist Academy.

Alford, who played at Louisiana Tech, won back-to-back events on the APGA Tour last year at the TPC Scottsdale and Valhalla.

“Every competitive golfer dreams of someday playing on the PGA Tour,” he said.

Johnson was kept from playing last year after the positive test. He wound up getting exemptions to Pebble Beach, the Honda Classic and Bay Hill.

Meanwhile, the APGA Tour Farmers Insurance Invitational will expand to 36 holes, on the North Course at Torrey Pines on Saturday and the South Course on Sunday. The PGA Tour events end on a Saturday. Golf Channel will televise the Sunday round, the first time an APGA Tour event will be on TV.

Davis Love III says his mother, Penta B. Love, died Monday after a long struggle following a stroke. She was 94 and had been living in St. Simons Island, Georgia, since 1977 when her late husband, respected teaching professional Davis Love Jr., took a job at Sea Island. He died in a plane crash in 1988.

“While everyone in our family is saddened at the loss of our family leader, we are blessed with so many great memories and rejoice that our faith tells us she is at peace eternally,” Love said.

In his book, “Every Shot I Take,” Love said his mother was a good player and he grew up trying to beat her at golf, which took him into his early high school years. The former PGA champion and two-time Ryder Cup captain says his mother constantly was on him about his putting.

“Her favorite thing to say, in regard to my putting, is, ‘Davis, you’re reading too much break,'” Love wrote in his book. “I'll say, ‘You know, Mom, these greens on tour are a little faster than what we've got at home.' She is never moved. ‘Too much break, Davis, too much break.’”

Kaye Kessler first wrote about 10-year-old Jack Nicklaus as a sports writer in Ohio and went on to cover 126 men’s professional majors.

Kessler was 11 days short of his 98th birthday when he died on Thursday, according to longtime friend Keith Schneider, the general manager at Castle Pines Golf Club who first met Kessler when he was sports editor of the Columbus (Ohio) Journal Citizen.

Kessler started with the Columbus Citizen while in high school and spent some four decades covering golf and Ohio State before moving in 1985 to Colorado, where he stayed involved in golf through the now-defunct International tournament on the PGA Tour.

When he had to miss the Memorial in 2020 during the pandemic, Nicklaus mentioned his absence and said, “Not many people today can start a conversation with me by saying, ‘Jack, I remember when you were just 10 years old.’”

Kessler received the PGA Lifetime Achievement Award in Journalism in 2001 and the Memorial Tournament Journalism Award in 2002 and he was inducted into the Colorado Golf Hall of Fame in 2007.

North Berwick will host final qualifying for the Women's British Open next summer, where three players will earn spots in the field at Muirfield. North Berwick previously held the 2008 Women's British Amateur and has been a final qualifying site for the men's British Open six times. ... The 13th edition of the Els for Autism Pro-Am raised more than $1 million, taking its total to about $13 million since the tournament began. The money goes toward the Els Center of Excellence in Jupiter, Florida, for children with autism, including Ernie Els' son, Ben. ... The PGA Tour's “super season” in 2020-21 that involved 51 tournaments with six majors allowed a record 124 players to earn at least $1 million on the golf course.

Brad Kennedy at No. 385 was the only player from the top 400 in the world ranking who played last week. He was runner-up in the Victorian PGA Championship on the PGA Tour of Australasia.

“The charity dollars is what’s most important, so the more money I can get in my hands, the more I can give away.” — Bubba Watson on his decision to sign up for the Saudi International.