Joe Burrow and coach Zac Taylor didn't care that the Bengals already had the game in hand when they continued to dial up pass plays late in the win that sealed a season sweep of the Baltimore Ravens.

“Last year, we hardly had anybody left, and we didn't feel anybody minimizing their win against us,” Taylor said, likely recalling the 38-3 loss to Baltimore in the finale of the 2020 season as the injury-ravaged Bengals limped to a 4-11-1 finish.

Sunday's 41-21 win put Cincinnati (9-6) in first place in the AFC North, with Burrow dominating the depleted Baltimore secondary for a franchise-record 525 yards. 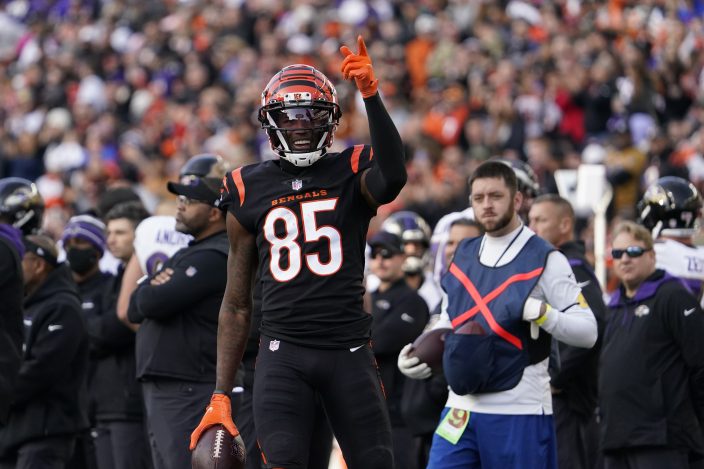 Cincinnati Bengals' Tee Higgins signals a first down following a catch during the second half of an NFL football game against the Baltimore Ravens, Sunday, Dec. 26, 2021, in Cincinnati. (AP PhotoJeff Dean)

After losses by the Pittsburgh Steelers and the COVID-19-ravaged Cleveland Browns, the Bengals looking toward the playoffs for the first time since 2015.

The Bengals have been up and down this season, never able to string together more than two wins in a row. On Sunday they won a second straight game, beating a Ravens team that had to start a third-string quarterback and a patched-together secondary.

Cincinnati Bengals' Tee Higgins (85) celebrates a touchdown reception during the second half of an NFL football game against the Baltimore Ravens, Sunday, Dec. 26, 2021, in Cincinnati. (AP PhotoAaron Doster)

The Bengals this season have managed to look fantastic and terrible, sometimes week to week. All they've done up to now is ensured a winning record for the first time since 2015. That year they were 12-4 and division champs, but lost to the Steelers in a wild-card game. Cincinnati hasn't won a playoff game since the 1990 season.

So there is much riding on the last two weeks of the season, a home game against Kansas City, which has clinched the AFC West, and then the finale at the Browns, who are 7-8 and on the playoff bubble.

“It’s been a crazy NFL season," Taylor said. "There’s a lot of adversity that comes at you from a lot of different ways. We do a lot of positive things, and oftentimes people just want to point out the negatives. Our guys have plowed through it all and found the positives and kept building on it and kept believing each other, kept believing the coaches, coaches believed in the players and here we are.

“Everything’s right in front of us, right here going into January,” he said. "So we’re happy about that, but we’re not content yet.”

The Bengals' passing game is definitely working. Burrow shattered Boomer Esiason's single-game record, passing for the fourth-highest total in NFL history, and four touchdowns. Tee Higgins had a career-high 194 receiving yards and a pair of touchdowns. Rookie Ja’Marr Chase had 125 yards and Tyler Boyd had 85 yards, including a 68-yard touchdown.

Cincinnati will need to win three straight for the first time this season if it wants to keep a lock on the division title and the playoffs. Consistency has been an issue. In October, they followed up a 41-17 thumping of the Ravens with an inexplicable 34-31 loss to the New York Jets and then a blowout loss to the Browns. Cincinnati routed the Steelers 41-10 after Thanksgiving only to drop back-to-back games to the Chargers and 49ers in early December.

Running back Joe Mixon is more of a reliable grinder than flashy home run hitter. Even though he had just 65 rushing yards in the Ravens win, he also caught six passes for 70. He ran for a touchdown and caught another one. The fifth-year veteran has 1,159 rushing yards this season, and is 9 yards away from his previous season high, in 2018. He also was selected to the Pro Bowl.

The defensive line had one sack of Josh Johnson, a quarterback signed by Baltimore as a free agent on Dec. 16 and who ended up throwing for 304 yards and two touchdowns. That was by Cincinnati defensive end Trey Hendrickson, which gave him a career-high 14 for the season. Starting DT D.J. Reader went on the reserve/COVID-19 list, and DE Cam Sample went out with an injury early in the game Sunday.

Sample suffered a left hamstring injury in the first quarter that ended his day. His continued availability hasn't been determined. The Bengals have been relatively lucky with the pandemic through Week 16, but on Monday put backup QB Brandon Allen and already-injured cornerback Darius Phillips on the reserve/COVID-19 list.

8.7 — yards per passing attempt, best in the NFL among starting quarterbacks for Burrow.

Consistency. The Bengals are in first place at the moment, but that could change if they follow the season trend and drop the last two. The Chiefs visit for the last home game of the regular season on Sunday.