The Los Angeles Rams followed up a winless November with a perfect December, and the way they overcame major obstacles to reach that mark brought all kinds of holiday cheer to a team that refuses to fall out of the Super Bowl chase.

The Rams' 30-23 win at Minnesota on Sunday secured their fourth playoff berth in five seasons under coach Sean McVay and put them in sole possession of first place in the NFC West.

Los Angeles (11-4) controls its destiny for a home playoff game as it heads into its final two games — at Baltimore on Sunday, and at home against nemesis San Francisco in the regular-season finale. 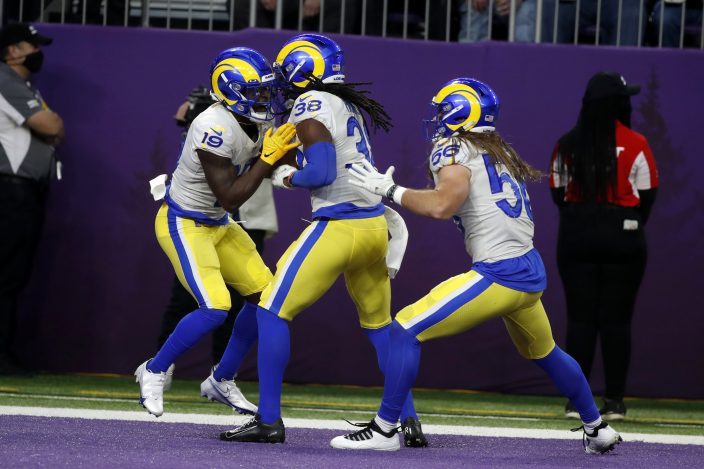 Los Angeles Rams' Brandon Powell (19) celebrates with teammates after scoring on a 61-yard punt return for a touchdown in the second half of an NFL football game against the Minnesota Vikings, Sunday, Dec. 26, 2021, in Minneapolis. (AP PhotoBruce Kluckhohn)

A month of COVID-19 woes didn't slow the Rams, and a short week of rest and preparation for the Vikings didn't appear to faze them. They didn't panic when they fell into a losing skid last month, and they aren't getting overly excited with their recent successes.

The Rams followed up a home win over Seattle last Tuesday with a road victory over the Vikings just five days later. Both games weren't perfect, but Los Angeles' stars came through both times — none more so than defensive lineman Aaron Donald and receiver Cooper Kupp, who celebrated their Pro Bowl selections with two more outstanding performances in Minnesota. 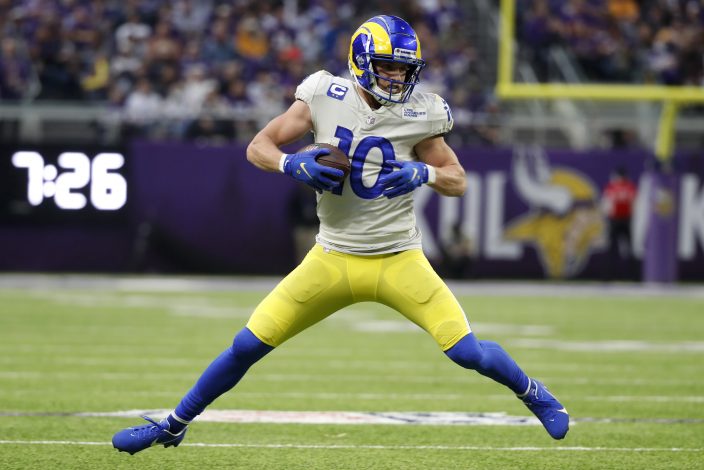 Los Angeles Rams wide receiver Cooper Kupp (10) runs up field after catching a pass during the first half of an NFL football game against the Minnesota Vikings, Sunday, Dec. 26, 2021, in Minneapolis. (AP PhotoBruce Kluckhohn)

The Rams even won a road game in which their quarterback threw three interceptions for the first time in 17 years. Matthew Stafford’s mistakes in the second half of the season are cause for concern, but they haven't been able to interrupt an impressive stretch for a team with confidence growing by the week.

“There's been great energy,” running back Sony Michel said. “Everybody is feeding off the same energy, riding the same wave, feeling that same frequency.” 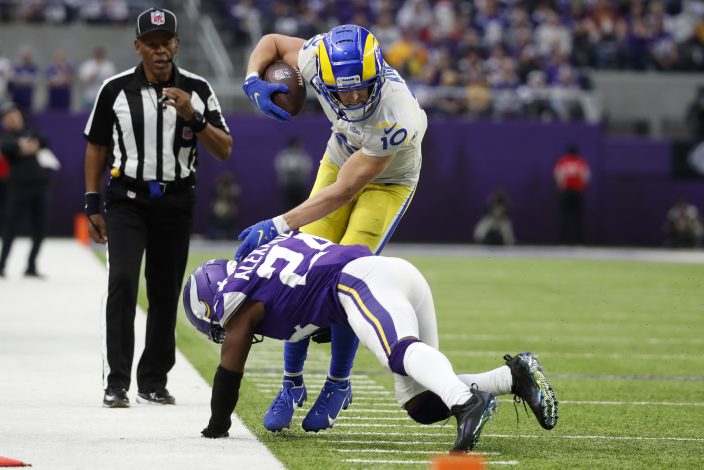 The Rams' run defense is sturdy and getting stronger. After holding Minnesota to 66 net yards on the ground, Los Angeles has allowed more than 103 yards rushing just once in eight games since October. After a poor start to the season, the Rams are up to sixth in the NFL with 96.9 yards per game allowed on the ground.

There’s still no reason to think the Rams' secondary can't be carved up by the NFC's elite quarterbacks in the playoffs despite Jalen Ramsey's brilliant season and some of the NFL's best pass rushers up front. Kirk Cousins was the fifth 300-yard passer this season against a defense that allowed just one quarterback to reach the mark in 2020. Starting cornerback Darious Williams wasn't sharp, and the patchwork supporting cast remained largely unimpressive.

Los Angeles hit a midseason jackpot in kick returner Brandon Powell, whose 61-yard punt return for a TD catalyzed the win. The Rams lost their first three projected kick returners to injuries, so Powell's arrival was borne of desperation — but the former Florida wideout is providing steady contributions at a position that appeared to be a weakness.

Stafford is making plays, but he’s also making mistakes. He threw three interceptions Sunday for the first time since the 2018 season opener, and the Vikings dropped two other balls that could have been picked. Stafford also misfired on a handful of big throws that should have been completions for a quarterback of his talents and experience. Stafford’s worst performance of the season kept Minnesota in a game the Rams could have won in a blowout.

Linebacker Ernest Jones needs surgery on his high ankle sprain after an offensive lineman rolled up on him. The rookie has taken on an important role since his midseason addition to the starting lineup.

“Ernest was just starting to hit his stride,” McVay said.

There’s a chance Jones could return for the playoffs, but he is headed to injured reserve along with RB Darrell Henderson, who sprained a ligament in his right knee when he was tackled awkwardly. Henderson will be sidelined for at least three to five weeks, according to McVay, but his absence is mitigated by Michel’s outstanding play and the imminent return of RB Cam Akers, who has a chance to play this week for the first time. He tore his Achilles tendon before training camp. ... C Brian Allen went down with a knee injury, but McVay thinks he’s fine. ... OT Joseph Noteboom is back off the reserve/COVID-19 list. He barely missed the deadline to play Sunday.

9 — Career offensive snaps for undrafted rookie left tackle Alaric Jackson before he was forced into action by an injury on the line. The Iowa product acquitted himself quite well in those difficult circumstances, performing strongly in the run game and allowing just two quarterback pressures. The Rams have been high on Jackson since they signed him, and he showed why.

Another long flight on a holiday for another early kickoff — although the Rams are 4-0 in games starting at 10 a.m. Pacific time this season. If Los Angeles beats Baltimore and Arizona loses later in the day, the Rams would clinch their third NFC West title under McVay and a home playoff game. If not, the race will go down to the final weekend.