A COVID-19 outbreak had removed 16 players from the Saints' active roster before they hosted a Miami squad that came in on a six-game winning streak. The Dolphins had most of their premier players available, including quarterback Tua Tagovailoa and top receiver Jaylen Waddle.

The Saints had to start rookie QB Ian Book under center and were missing two starting receivers, along with both starting offensive tackles. For the second straight game, New Orleans failed to score a touchdown. They got away with it in a stunning 9-0 shutout victory at Tampa Bay in Week 15. But on Monday night they faded down the stretch in a 20-3 loss, finished with fewer than 170 net yards and did not convert any of their 12 third downs. 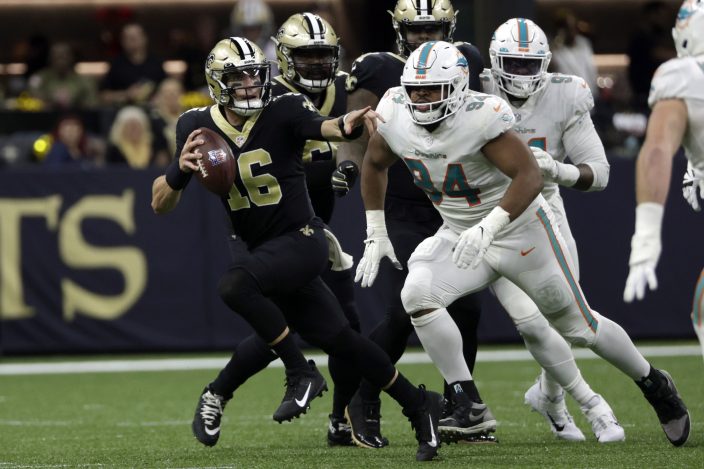 New Orleans Saints quarterback Ian Book (16) is chased out of the pocket by Miami Dolphins defensive end Christian Wilkins (94) during the first half of an NFL football game Monday, Dec. 27, 2021, in New Orleans. (AP PhotoDerick Hingle)

“There were a number of things offensively that didn’t sit well, I’m sure, with all of us as coaches,” Payton said. “Nonetheless, this is a game that we are going to want to quickly get behind us. We have a short week and two important games coming up — two division games that are going to be important relative to the NFC” playoffs.

Now at 7-8, the Saints might need to win their final two games to have a reasonable chance to make the playoffs after what has been a season plagued first by major injuries or rehabilitation setbacks to prominent players such as receiver Michael Thomas and quarterback Jameis Winston, ailments that sidelined top offensive linemen and versatile star running back Alvin Kamara for multiple games, and now a COVID-19 outbreak.

“We can’t seem to get away from adversity," said second-year linebacker Zach Baun, who started on Monday night because New Orleans' top two linebackers — Demario Davis and Kwon Alexander — were on COVID-19 reserve. "You just have to roll with the punches."

This season, which opened with the challenge of finding a successor to the retired record-setting QB Drew Brees, has been one in which the club responded well at first to being displaced nearly a month by Hurricane Ida — winning five of its first seven — only to lose six of eight while lineups were constantly changing.

With victories this season against contenders Green Bay, Tampa Bay (twice) and New England, the Saints aren't about to sell themselves short.

“We have a good idea of what this team is capable of doing,” Payton said. "Hopefully, we can get some guys back here this week and be ready to go for (Sunday's) game.”

With defensive ends Cameron Jordan and Marcus Davenport both playing well, the pass rush has affected opposing quarterbacks considerably in the past two games. Two games ago, Tampa Bay's Tom Brady was sacked four times, fumbled and threw an interception in a Saints shutout win. Against Miami, Dolphins QB Tua Tagovailoa was sacked three times, threw an interception and led his offense to just one touchdown.

The offensive line could use some bodies back. The Saints have struggled to pass all season and shoddy protection doesn't help for relatively inexperienced starters such as Taysom Hill, never mind reserves Trevor Siemian and Book. But even the running game, which has been a strength much of this season, has seen its productivity drop lately because of a lack of room to run.

Jordan had two sacks for the second game in a row and now has eight sacks in his past nine games. The surge gives the 2021 Pro Bowl end at least seven sacks in every season since 2012, his second year as a pro.

The Saints expect better from starting right guard Cesar Ruiz, a 2020 first-round pick out of Michigan. A good portion of the backfield pressure Miami got was by players Ruiz was meant to block.

Left tackle Terron Armstead was held out a second straight game because of a knee injury. Right tackle Ryan Ramzcyk, who was on COVID-19 reserve on Monday night, also had missed the five previous games with a knee injury. Receiver Tre'Quan Smith injured his chest against Miami after entering the game with a shoulder injury. Reserve left tackle Caleb Benenoch, pressed into a starting role against Miami, left the game in the fourth quarter with an undisclosed injury.

1 — The number of times the Saints have won this season inside the Superdome, where they have lost five times. The Saints' 2-5 home record this season includes their opener against Green Bay that was moved to Jacksonville, Florida, because of Hurricane Ida.

The Saints host Carolina on Sunday and finish the regular season with a road trip to Atlanta.