SEOUL, South Korea — South Korea is extending measures to guard against the omicron variant of the coronavirus for another four weeks.

The Korea Disease Control and Prevention Agency said Wednesday that short-term foreign travelers from 11 African countries will continue to be banned from entering the country, while all other international arrivals will be required to observe a 10-day quarantine until Feb. 3.

The delta variant still accounts for the vast majority of new cases in South Korea, but experts say omicron could become the country's dominant strain in the next few months.

South Korea registered a total of 5,409 new cases on Wednesday, and the number of critically or seriously ill patients reached a record high of 1,151. 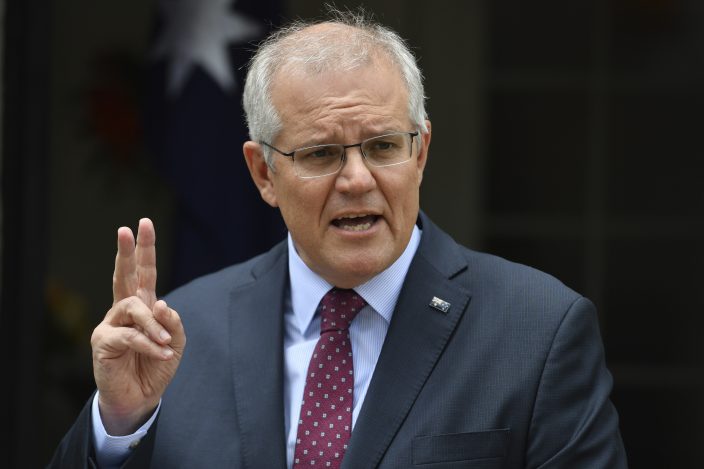 Australia's Prime Minister Scott Morrison speaks at a press conference in Sydney, Wednesday, Dec. 29, 2021. Coronavirus cases are surging across Australia as the outbreak of the omicron variant is exploding, prompting Morrison to schedule an emergency national cabinet meeting. (Mick TsikasAAP Image via AP)

— Asia keeps omicron at bay, but a surge may be inevitable

JERUSALEM — Israel has lifted its travel ban on dozens of European and African countries, including Italy and Germany, even as the country’s coronavirus infection rate continues to surge.

But the Israeli government’s Corona Cabinet approved red-listing Mexico on Wednesday, adding it to a travel ban that includes the United States, United Kingdom and Canada.

Israel largely closed its borders to travel following the emergence of the highly infectious omicron variant last month. It has seen new daily infections more than double in the past week, despite a successful vaccination campaign.

More than 4.2 million of Israel’s 9.3 million people have received a coronavirus booster shot since they were authorized in July. Earlier this week, a major hospital started a trial to study the effect of a fourth dose of the Pfizer/BioNTech vaccine on medical personnel.

Israel has recorded at least 8,243 deaths from coronavirus since the start of the pandemic nearly two years ago.

She added: “But we can’t leave it there. For next year, we plan a further donation of at least 75 million doses.”

Schulze said she agrees with Germany’s health minister that the donations can’t come at the expense of the country’s own vaccination campaign, which officials are working to keep in high gear as the new omicron variant advances.

But she said “we agree that we can achieve both things: supplying our own population and that of poorer countries.”

The surge has already overwhelmed testing stations, prompted new vaccine mandates and caused at least one state to cut back on elective surgeries.

New infections in Sydney and surrounding parts of New South Wales state skyrocketed to more than 11,000, up from 6,000 a day earlier. Victoria state also reported a record 3,700 cases, up by more than 1,000 from the previous record set on Tuesday.

Morrison said the nation’s leaders would meet ahead of schedule on Thursday.

“As omicron continues to go forward we will see further pressures, but states and territories are working very closely on their plans to deal with those challenges,” Morrison told reporters.

He said he hoped the meeting would help give a clearer definition on what constituted a close contact and which tests should be used in different circumstances as case numbers ballooned.

NEW YORK — The Broadway revival of “The Music Man” has been one of the hottest tickets in town and it has limped along without co-star Sutton Foster. But now the show is being shuttered until the new year because Hugh Jackman has tested positive for the coronavirus.

Jackman took to social media Tuesday to announce that he had tested positive. He says that although his symptoms are mild with only a scratchy throat and a runny nose, he needs to quarantine.

Some Broadway shows have closed for several days and some have folded completely because of virus cases “Thoughts of a Colored Man” joined “Waitress” and “Jagged Little Pill” as shows that have closed this winter due in part to rising infection rates.

HONOLULU — The University of Hawaii will conduct mostly online classes for the first two weeks of the spring semester as the state watches a surge in omicron coronavirus cases.

Hawaii has had all-time record high daily COVID-19 numbers in recent days. University of Hawaii officials say that campuses across the islands will temporarily move many classes to online instruction.

In an email to students and staff, University of Hawaii President David Lassner says only classes that can be “effectively taught online” will change.

Other classes will be taught in person but with physical distancing, mask wearing and health screenings in place

ATLANTA — Emory University’s president said Tuesday the school is switching to virtual classes to start the spring semester because of a national surge in COVID cases fueled by the omicron variant.

In a letter to the university community, President Gregory Fenves said Emory will transition back to in-person learning on January 31 if conditions permit that.

The switch to remote learning applies to undergraduate, graduate and professional courses. Residence halls will remain open, though students are encouraged to delay their return to campus.

COVID-19 infections in the Atlanta area, where Emory is located, are climbing rapidly.

The seven-day average of COVID-19 cases in Georgia rose to nearly 8,700 a day on Monday, according to the state Public Health Department. That’s nearing the peaks that Georgia saw in infection numbers in early January and early September.