PARIS — Residents and tourists in Paris will be required to wear face masks outdoors starting Friday as France sees a surge of COVID-19 infections fueled by the omicron variant.

The Paris police prefecture said the mask rule will apply to people ages 12 and over, although individuals will be except while riding bicycles or motorcycles, traveling in vehicles and doing exercise. 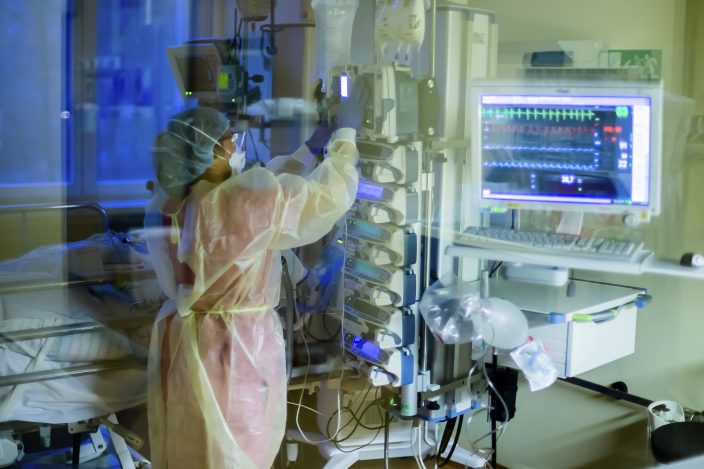 Masks already are mandatory in shops, public facilities and office buildings and on public transportation in France.

The French government announced measures to fight the spread of the coronavirus this week, when France reported a daily record of 208,000 new COVID-19 cases on Wednesday. 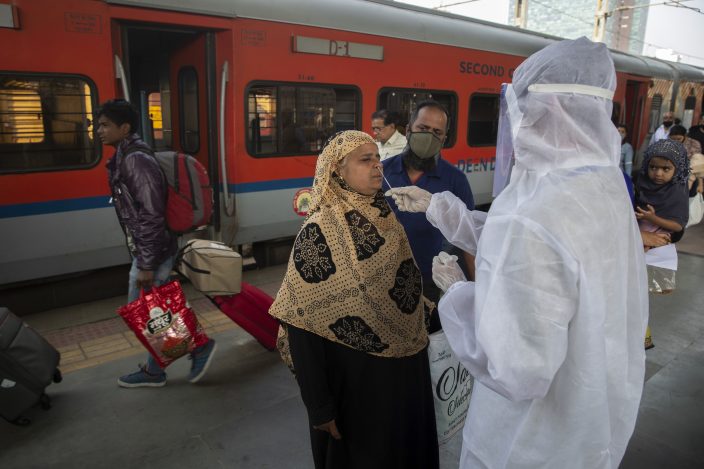 A health worker takes a swab sample of a traveler to test for COVID-19 at a train station in Mumbai, India, Thursday, Dec 30, 2021.(AP PhotoRafiq Maqbool)

— City of San Francisco to require boosters for certain workers 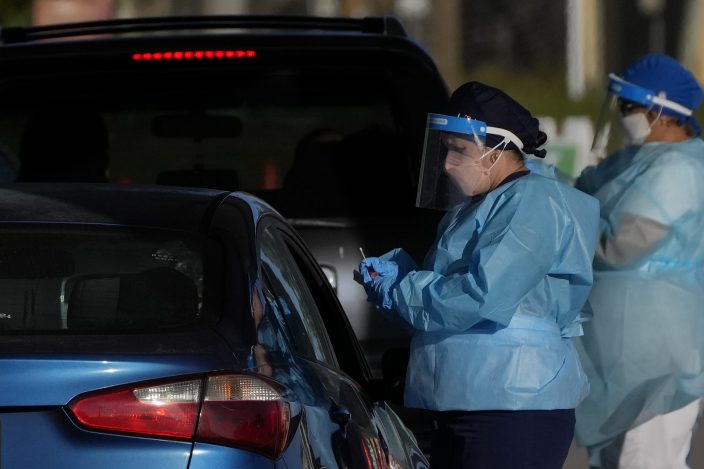 TAIPEI, Taiwan — Chinese officials promised steady deliveries of groceries to residents of Xi’an, an ancient capital with 13 million people that is under the strictest lockdown of a major Chinese city since Wuhan was shut early last year at the start of the pandemic. 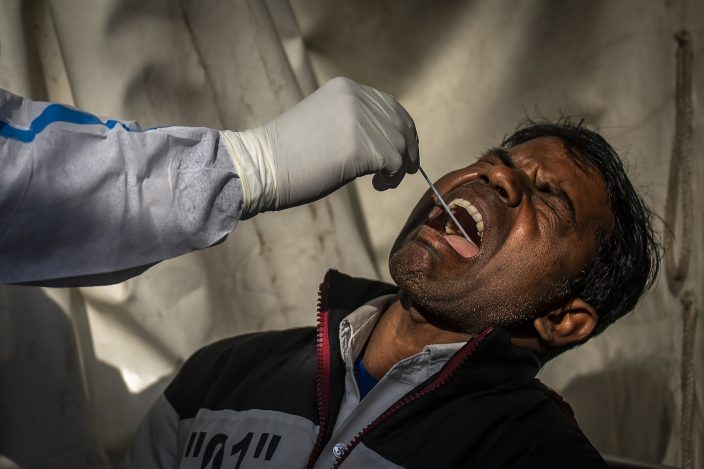 An Indian man reacts as a health worker collects his swab sample to test for COVID-19 at a train station in New Delhi, India, Thursday, Dec. 30, 2021. In India, which has been getting back to normal after a devastating COVID-19 outbreak earlier this year, omicron is once again raising fears, with more than 700 cases reported in the country of nearly 1.4 billion people. The capital, New Delhi, banned large gatherings for Christmas and New Year's, and many other states have announced new restrictions, including curfews and vaccination requirements at stores and restaurants. (AP PhotoAltaf Qadri)

The deliveries included a box of 15 eggs, a 2.5-kilogram (5.5-pound) bag of rice and some green vegetables. Residents could also expect either some chicken or pork, it said.

Still, some people complained in comments below the segment shared on Weibo, a social media platform, that they have not received the same deliveries in their communities. Many worried if they will be able to obtain fresh vegetables and meat.

PODGORICA, Montenegro — Montenegro has tightened virus rules amid a surge in infections and fears of fast-spreading omicron variant.

Starting Thursday, all gatherings are banned indoors or outdoors in the European country, including weddings, parties and conferences. Bars and restaurants were ordered to close at 1 a.m. on New Year’s Eve and 10 p.m. after the holidays.

Authorities also limited the number of people allowed into shopping malls and religious objects to one per 10 square meters (108 square feet) and said COVID passes are required for cinemas, museums and theatres.

For sports events, spectators are banned indoors and outdoor venues are limited to one-fourth capacity. Face masks are obligatory everywhere.

Authorities have said that numbers of new infections have risen and the tightened rules are needed to prevent them from spiraling out of control. Some 1,500 new infections were reported on Wednesday in the nation of 620,000 people.

Montenegro has also tightened entry rules for visitors and urged people to spend the upcoming holidays just with their immediate family.

The council said Wednesday that it has sufficient evidence the vaccine is safe and effective.

The approval for emergency use does not necessarily mean the Mexican government will acquire or administer the Abdala vaccine in Mexico. Mexico has approved 10 vaccines for use, but has made little use of some, like China’s Sinopharm.

Cuba has approved Abdala for use domestically and begun commercial exports of the three-dose vaccine to Vietnam and Venezuela.

More than 300,000 visitors are expected in town for events including a New Year’s Eve fireworks show on the Las Vegas Strip that was canceled last year due to the coronavirus pandemic

Thousands of ticketholders also are expected at a multi-stage outdoor music event beneath a canopy light show at the downtown casino pedestrian mall.

In announcing Wednesday that the show will go on, Clark County Commissioner Michael Naft said: “If you’re sick, stay at home. If you’re indoors, wear a mask.”

Las Vegas regional health officials reported 2,201 new coronavirus cases — the most in one day since last Jan. 11. New cases and deaths in Las Vegas have been trending up.

Officials in Newfoundland and Labrador province, meanwhile, say schools will shift to remote learning after the Christmas break.

And in Nunavut territory, officials are extending a lockdown as a rise in infections strains its health care system. Premier P.J. Akeeagok says the ban on indoor gatherings that began before Christmas is being extended to Jan. 17. Libraries, gyms, arenas and churches must also remain closed and restaurants are limited to takeout service only.

NEW YORK — A surge of coronavirus cases in New York has forced the postponement of another signature event, the Westminster Kennel Club’s annual dog show.

The show announced Wednesday it has postponed its 146th annual event to have been contested in late January. The announcement didn’t give a new date for the show but said it would be later in 2022.

The dog show normally is held in February at Madison Square Garden but was moved to June last year and held at the Lyndhurst estate in suburban Tarrytown. Spectators weren’t allowed, and human participants had to be vaccinated or newly tested.

MILAN — The Italian government on Wednesday put fresh restrictions on the unvaccinated and reduced quarantine times for those with boosters as the number of new virus cases skyrocketed by one-quarter to a single-day total of nearly 100,000.

Under a decree aimed at preventing an economic slowdown, anyone with a booster shot or who has completed two doses within four months will not be required to quarantine after close contact with someone who is positive. A 10-day quarantine remains in effect for the unvaccinated.

The government is reducing the list of free-time activities available to the unvaccinated. Starting Jan. 10, the jab will be required to access public transportation of any kind, hotels, ski lifts, conventions and fairs, swimming pools and wellness areas. Until then, a negative 10 within 48 hours will remain sufficient.

NEW ORLEANS — Louisiana’s COVID-19 death toll edged toward 15,000 on Wednesday, and the zoo in New Orleans said half of its lions had been diagnosed with the disease.

Five deaths reported Wednesday brought the state total to 14,983. And hospitalizations, after doubling in the week that ended Sunday, have risen nearly 47% since then to 659, the Louisiana Department of Health dashboard indicated.

The three infected African lions are doing well and have normal appetites, the Audubon Zoo said in a news release Wednesday. Arnold, a full-grown male; Asani, one of two yearling males, and Kali, one of three females, were tested after they came down with coughs and nasal discharges. The other three are now being tested, the statement said.

“All symptoms have been intermittent and mild,” so no medication has been needed, senior veterinarian Bob MacLean said in a statement relayed by a zoo spokeswoman.

The zoo said veterinarians don’t know how the lions became infected, but it’s likely that they got the coronavirus from an asymptomatic keeper in spite of numerous precautions. Employees must be vaccinated against COVID-19, and those working with susceptible animals must wear N95 or KN95 masks, the statement said.

COLUMBUS, Ohio — The number of people in the hospital with COVID-19 has reached a pandemic record high in Ohio, Gov. Mike DeWine said Wednesday as he ordered additional members of the state National Guard into hospitals to help with the surge.

Ohio had 5,356 people in the hospital with the coronavirus Wednesday, the highest since the pandemic began in March 2020, accounting for more than one of every five hospital beds. That’s also the highest per-capita hospitalization rate in the country, said Robert Wylie, chief medical operations officer at the Cleveland Clinic.

More than nine of every 10 people hospitalized with COVID-19 since June have been unvaccinated, DeWine said.

DeWine is ordering the deployment of 1,250 members of the Ohio National Guard to help hospitals. That’s on top of the more than 1,000 members of the Guard that DeWine called up earlier this month.

Cyprus’ Health Minister Michael Hadjipantela said Wednesday that the daily infection rate now hovers at a record high of around 2.5% as the omicron variant has now taken a firm hold on the country and is projected to increase infections as well as hospital admissions.

Hadjipantela said that as of Thursday, the maximum number of patrons at bars, restaurants and nightclubs will be capped at 300 vaccinated persons. Anyone who hasn’t received a booster shot is required to have a negative rapid test 24 hours prior to attending any function.

Also next month, 40% of all staff at offices will be required to work from home, while attendance at sports stadiums will be capped at 50% capacity.

LA PAZ, Bolivia — Bolivia’s main cities canceled any public activities for New Year’s Eve after the country reached a record 4,939 new cases of COVID-19, the highest number for one day in all the pandemic in the South American nation.

The celebrations were called off for the cities of La Paz, Cochabamba and El Alto after local authorities said it would be irresponsible to allow public festivities.

“The pandemic is escalating, and life is first,” said Iván Arias, mayor of La Paz. “It’s preferable to be safe than sorry.”

Bolivia has not detected the omicron variant, but the health authorities have said that the surge in cases can be attributed to people not following some measures such as social distancing or wearing masks.

President Luis Arce issued a decree requiring people to show a vaccination certificate before entering some public places, like restaurants. The measure will take effect on Jan. 1.