Israeli troops shot and seriously wounded a Palestinian man as he ran toward a bus stop in the occupied West Bank on Friday wielding a knife in an attempted stabbing attack, the military said.

It said the alleged attacker exited a car at a junction and advanced toward a group of Israeli civilians and soldiers waiting at the bus stop. He was shot before reaching them.

The Palestinian Health Ministry says the man, who has not yet been identified, is in critical condition. 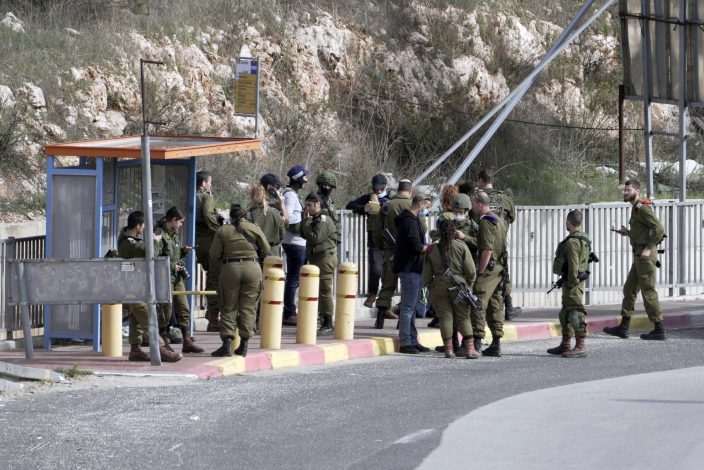 Israeli soldiers gather at a bus stop that was the site of an attempted stabbing attack at a junction near the settlement of Giti Avishar in the West Bank, Friday, Dec. 31, 2021. (AP PhotoMajdi Mohammed)

Photos and videos published online show the Palestinian lying face down at a junction near an Israeli settlement before being taken away in an ambulance. The Israeli military released a photo of the knife.

The alleged attack comes amid an uptick in stabbings against Israeli citizens. Earlier this month, an ultra-Orthodox Jew was seriously wounded after being stabbed by a Palestinian man just outside the walls of Jerusalem’s Old City. The attacker was shot dead by Israeli police.

Settler violence against Palestinians has also intensified in recent weeks after a Jewish settler was shot dead by a Palestinian gunman in the northern West Bank. The killing ignited a string of settler retaliation attacks that left at least four Palestinians moderately wounded and sparked a series of clashes between Palestinians and Israeli forces.

Israel captured the West Bank in the 1967 Mideast war. Around 600,000 Jewish settlers live in more than 130 settlements scattered across the occupied territory, which is home to more than 2.5 million Palestinians. The Palestinians want it to form the main part of their future state.

Israel views the West Bank as the biblical and historical heartland of the Jewish people. The Palestinians consider the growing settlements as a violation of international law that threatens a two-state solution to the conflict, a position with wide international support.