LISBON, Portugal — A cruise ship carrying over 4,000 people has been held in the Portuguese capital of Lisbon after a COVID-19 outbreak infected crew members, the German news agency dpa reported Saturday.

German company Aida Cruises told dpa that it discovered the positive coronavirus cases during routine health checks and has accommodated those infected ashore in coordination with Portuguese authorities in Lisbon.

Portuguese media reported that 52 members of the crew of over 1,000 workers tested positive. None of the nearly 3,000 passengers had tested positive. All on board had passed a screening test and were vaccinated with two doses before the ship set sail from Germany. 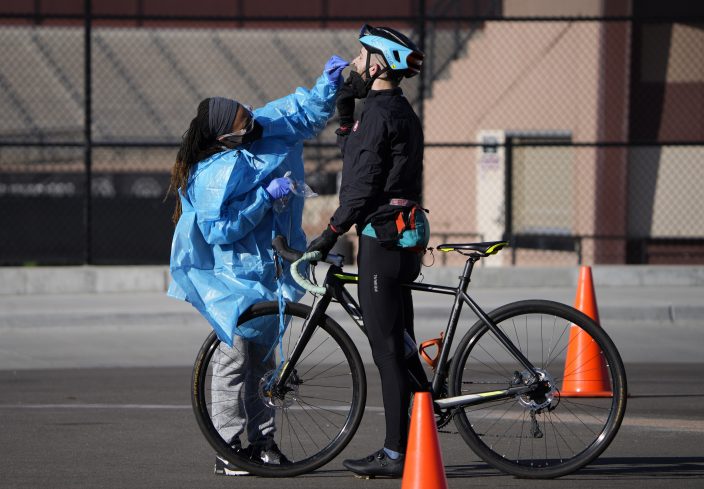 A medical technician performs a nasal swab test on a cyclist queued up in a line with motorists at a COVID-19 testing site near All City Stadium, Thursday, Dec. 30, 2021, in southeast Denver. With the rapid spread of the omicron variant paired with the Christmas holiday, testing sites have been strained to meet demand both in Colorado as well as across the country. (AP PhotoDavid Zalubowski)

The ship is waiting for the arrival of new crew members to continue its journey to Spain’s Canary Islands, dpa said. 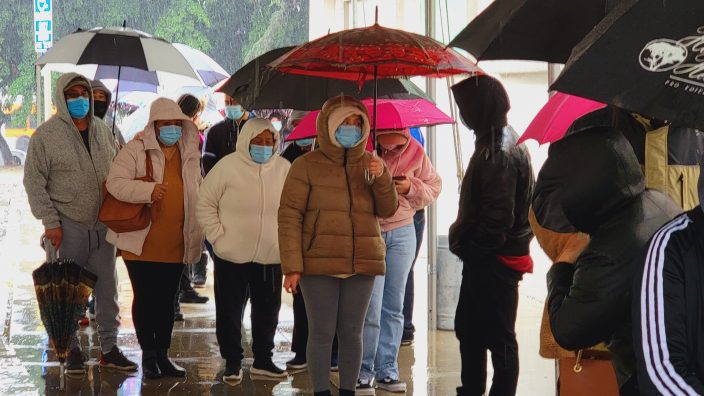 People wear face mask as they stand in line for a free COVID-19 test outside the Lincoln Park Recreation Center in Los Angeles on Thursday, Dec. 30, 2021. More than a year after the vaccine was rolled out, new cases of COVID-19 in the U.S. have soared to their highest level on record at over 265,000 per day on average, a surge driven largely by the highly contagious omicron variant. (AP PhotoDamian Dovarganes)

— US children hospitalized with COVID in record numbers 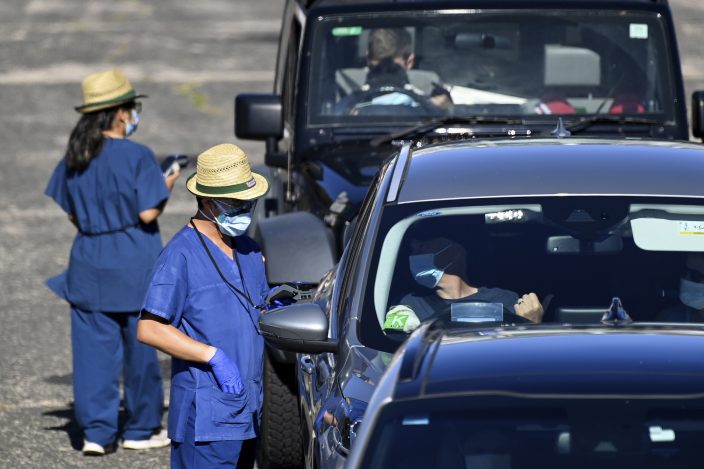 BOSTON — With COVID-19 cases surging just as students are about to return from winter break, dozens of U.S. colleges are moving classes online again for at least the first week or so of the semester — and some warn it could stretch longer if the wave of infection doesn’t subside soon. 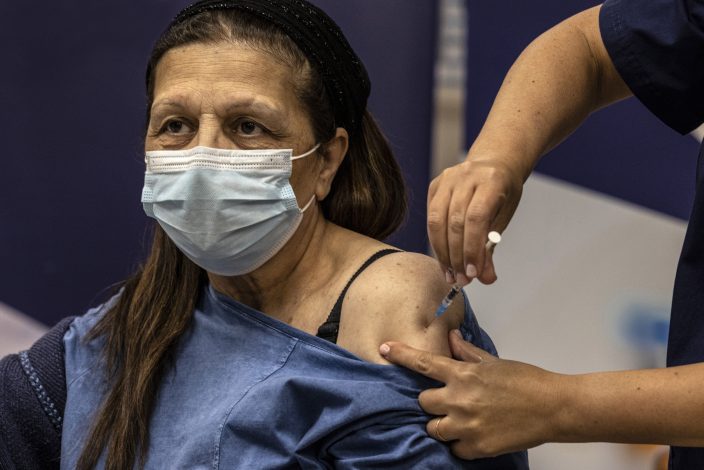 Harvard is moving classes online for the first three weeks of the new year, with a return to campus scheduled for late January, “conditions permitting.” The University of Chicago is delaying the beginning of its new term and holding the first two weeks online. Some others are inviting students back to campus but starting classes online, including Michigan State University.

Many colleges hope that an extra week or two will get them past the peak of the nationwide spike driven by the highly contagious omicron variant. Still, the surge is casting uncertainty over a semester many had hoped would be the closest to normal since the start of the pandemic.

For some U.S. students, starting the term remotely is becoming routine — many colleges used the strategy last year. But some fear the latest shift could extend well beyond a week or two. 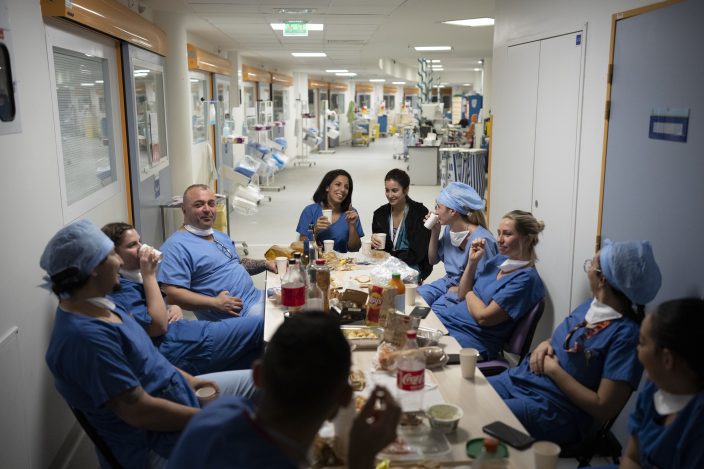 Jake Maynard, a student at George Washington University in the nation’s capital, said he is fine with a week of online classes, but beyond that, he hopes officials trust in the booster shots and provide a traditional college experience.

TOKYO — Japan’s Emperor Naruhito offered prayers for those who died during the pandemic, taking to video for the second straight year for his New Year’s greeting on Saturday, having canceled public palace gatherings to curb coronavirus infections.

Sitting before a bonsai tree with his wife Masako, Naruhito praised and thanked doctors and other health care workers, and expressed concern for countries lacking access to vaccines and adequate hospital systems. 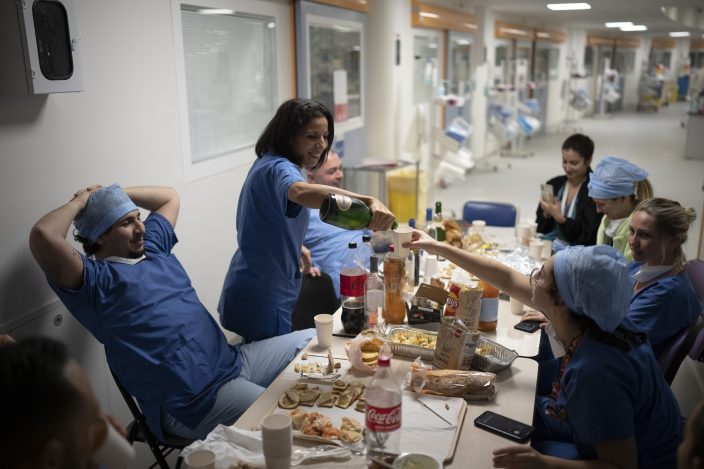 “By treasuring more than ever the connections among people, sharing our pain and supporting each other, I hope from the bottom of my heart that we will overcome these hard times,” he said.

Japan has recorded more than 18,000 COVID-19-related deaths, but the pace of deaths has fallen in recent months. Naruhito also voiced worries about the fast-spreading omicron variant.

LAS VEGAS — The annual CES gadget convention will be three days instead of four amid a jump in COVID-19 cases and the withdrawal of some of its best-known tech presenters.

Convention organizer The Consumer Technology Association announced Friday that CES will run from Jan. 5-7, one day shorter than planned. The event still has over 2,200 exhibitors confirmed to show off their products at the Las Vegas convention, spokeswoman Jeanne Abella said.

The announcement follows the withdrawal of tech giants from CES last week citing health risks of the omicron variant, including cellphone carriers like T-Mobile, whose CEO had been slated to deliver a keynote speech.

CES was held entirely virtually last year. It will be a hybrid of online and in-person this year, with organizers offering digital registration allowing access to around 40 livestreamed events, Abella said.

TAMPA, Fla. — The U.S. Centers for Disease Control and Prevention on Friday reported more than 75,900 new cases of COVID-19 in Florida.

That tally raises the 7-day average daily to 42,600, which is twice as high as it was at the peak of this summer’s surge when the delta variant fueled a surge of infections in the state.

Friday’s report marks a single-day record for the number of new cases in Florida. It breaks the record set a day earlier when more than 58,000 cases were reported in the state. The omicron variant of the coronavirus has spiked in Florida and across the nation over the past few weeks.

Soaring numbers during the holiday season have sent tens of thousands of people to COVID-19 testing centers across Florida, resulting in long lines in many areas.

Three people collapsed while waiting in line at a Tampa testing site on Friday morning.

CARSON CITY, Nev. — Hundreds of unvaccinated employees who work at public colleges and universities in Nevada were being fired Friday, a day after the state Board of Regents voted to keep a staff vaccine mandate in effect.

The Nevada System of Higher Education Board of Regents on Thursday deadlocked 6-6 on a measure to repeal the staff vaccine mandate and then rejected a measure to push the effective termination date back two weeks. Without majority support for a repeal, the mandate — which Gov. Steve Sisolak and the Nevada Faculty Alliance support — remained in effect.

Higher education officials said on Friday that 379 employees were being terminated, 188 attribution employees ended their contracts and 18 more voluntarily resigned. Employees who are fired can seek reinstatement if they show proof of vaccination in January, regents said.

PARIS — Describing himself as “resolutely optimistic,” French President Emmanuel Macron has used the last New Year’s address of his current term to express the hope that, with vaccinations, 2022 will see the end of the coronavirus pandemic.

Macron stopped short of saying that he will stand for re-election in April. He said only that he intends to continue serving the French “whatever my place and the circumstances.”

The president appealed to the 5 million unvaccinated but eligible people in France to get coronavirus jabs, saying: “All of France is counting on you.”

France has lost 123,000 people to COVID-19 and new cases are at unprecedented levels, surging with the highly contagious omicron variant. France reported a record 232,200 new cases on Friday, its third day running above the 200,000 mark.

ROME — Italy’s president, Sergio Mattarella, has used the last New Year’s Eve speech of his term take to task those who “waste” opportunities to receive a COVID-19 vaccine, calling that choice an “offense” to all those who haven’t been able to receive the injection.

In a televised speech to the nation Friday night, Mattarella, who is head of state, noted that he was serving in the final days of his seven-year term, with Parliament to elect his successor in the first weeks of 2022. Referring to recent COVID-19 surges in Italy and many other countries driven by virus variants, Mattarella noted a “sense of frustration” over the setbacks.

Gov. Kathy Hochul also said students at state universities and the City University of New York will have to get coronavirus vaccine booster shots to be on campus in the spring semester and must test negative before returning from the holiday break.

New confirmed case counts have been breaking records by the day in the state, topping 76,500 on Thursday, Hochul said at a news briefing.

An average of 53,000 New Yorkers a day tested positive in the week that ended Thursday, compared to 13,000 per day two weeks earlier. Over 7,900 people with COVID-19 are hospitalized statewide, up 67% in a week.

AUSTIN, Texas — Texas officials on Friday requested federal aid for increased COVID-19 testing and treatment following reports that the state is running low on the antibody treatment that has proved most effective against the omicron variant.

In a statement, Gov. Greg Abbott said the Texas Division for Emergency Management and the Texas Department of State Health Services made the request.

They are seeking federal resources for additional COVID-19 testing locations in six counties, increased medical personnel and more sotrovimab, the monoclonal antibody treatment that has proved most effective against the more-transmissible omicron.

Abbott called on the Biden administration “to step up in this fight and provide the resources necessary to help protect Texans.”

GAITHERSBURG, Md. — Novavax Inc. said it filed data Friday with the Food and Drug Administration to support clearance of its long-anticipated COVID-19 vaccine, a different kind of shot than current U.S. options.

Novavax said the data package is the last requirement before the company formally submits its emergency-use application next month to become the fourth U.S. COVID-19 vaccine. The announcement comes shortly after the European Commission and World Health Organization cleared use of the Maryland-based company’s two-dose shot.

Novavax developed a protein vaccine, similar to shots used for years against other diseases and a strategy that might appeal to people hesitant to use COVID-19 vaccines made with newer technologies. But Novavax, a small biotech company, faced months of delays in finding manufacturers to mass-produce its vaccine.

ROME — Italian health officials are warning that the rate of occupation by COVID-19 patients of hospital beds both in intensive care units and in regular wards has surpassed the “critical level” nationally.

A top Health Ministry official, Gianni Rezza, also said on Friday evening that the incidence of cases is growing, with 783 confirmed COVID-19 infections per every 100,000 residents in Italy. The country hit another high for daily new caseloads — 144,243 confirmed cases in the last 24 hours.

Nearly 12% of some 1.234 million swab tests conducted since Thursday resulted positive, according to the ministry, which urged vaccinated persons to get a booster shot if they are eligible.

With the nation slammed by a surge of infections largely driven by the omicron variant, the government banned public New Year’s Eve celebrations.

DALLAS — Flight cancellations surged again on the last day of 2021, with airlines blaming it on crew shortages related to the spike in COVID-19 infections.

By late morning Friday on the East Coast, airlines scrubbed more than 1,300 flights, according to tracking service FlightAware. That compared with about 1,400 cancellations for all of Thursday.

The remnants of the delta variant and the rise of the new omicron variant pushed the rate of new daily infections in the U.S. well above 200,000 a day, according to figures from Johns Hopkins University.