The southern rock group's ballad came to mind in the final minute of the Cincinnati Bengals' monumental 34-31 win over the Kansas City Chiefs on Sunday.

On fourth-and-inches from inside the 1 with under a minute left, Taylor, the Bengals coach since 2019, decided to go for a touchdown instead of calling on rookie Evan McPherson to kick a chip shot field goal that would have given the Chiefs the ball back with a chance to win. 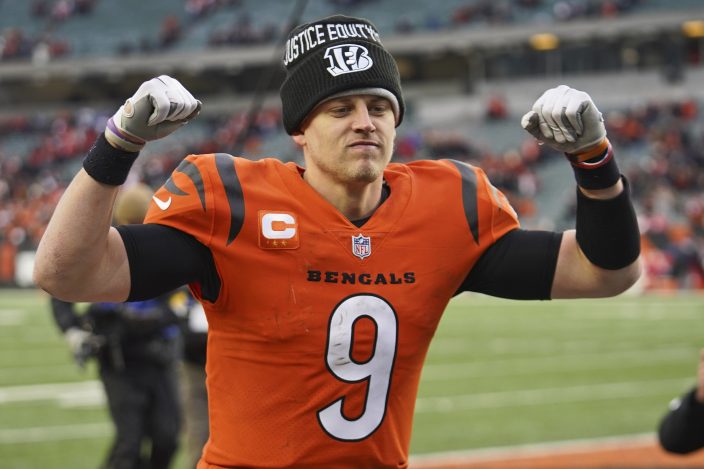 “I knew we’d go for it,” Bengals quarterback Joe Burrow said. “They’ve got Patrick Mahomes on the other side. He could go down and win the game.”

It was Burrow who went down on the next play.

Burrow, who threw for nearly 1,000 yards and eight touchdowns in the last two weeks, threw incomplete when blitzing safety Tyrann Mathieu knocked him to the ground. 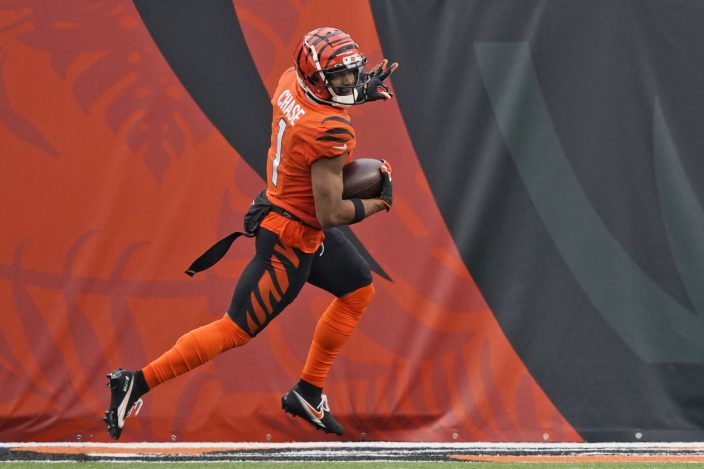 Cincinnati Bengals wide receiver Ja'Marr Chase celebrates after scoring a touchdown during the second half of an NFL football game against the Kansas City Chiefs, Sunday, Jan. 2, 2022, in Cincinnati. (AP PhotoJeff Dean)

Cornerback L’Jarius Sneed was whistled for hands to the face of receiver Tyler Boyd, and while most eyes were on the yellow flag in the end zone that would give the Bengals a first down and a chance to keep Mahomes on the sideline until postgame handshakes, Burrow was grabbing his right knee and hopping off the field.

“Burrow might have been hurt. He hobbled to the sideline,” Jim Nantz told viewers and broadcasting partner Tony Romo.

Backup Brandon Allen went in, took a knee at 45 seconds and spiked the ball at 2 seconds, bringing McPherson on to kick the game-winner as time expired.

Burrow was still lumbering around the field when the Bengals were celebrating their worst-to-first AFC North title and shaking hands with the Chiefs, whose loss handed the Tennessee Titans the pole position in the conference playoff race.

And the broadcast concluded with Nantz and Romo speculating that Burrow's balky knee — which wasn't the same one he had surgically repaired last year — would be a major storyline this week.

Burrow assuaged those concerns by puffing on a victory cigar and dancing in the postgame locker room celebration.

And that drew a collective sigh of relief from Bengals fans who haven't seen their team in the playoffs since the 2015 season and who haven't celebrated a win in the postseason since a 41-14 rout of the Houston Oilers in a wild-card game on Jan. 6, 1991.

They were beaten 20-10 by the Raiders in the divisional round the following week, beginning a string of 10 consecutive playoff defeats, the last nine of which have come on wild-card weekend.

While Burrow was doing his victory dance, Taylor, who won just six of his first 32 games in Cincinnati, relished the locker room celebration.

“It was a lot of earned emotions,” Taylor said. “You don’t want a playoff berth or a division championship handed to you, that’s something you take for yourself. And we wanted to do it with a victory. And our guys did it in unbelievable fashion.”

The Bengals leapfrogged the Ravens, who lost for the fifth straight time Sunday, negating an 8-3 start that had many penciling in Lamar Jackson for January heroics, not Burrow.

“I said it in the preseason, we were talking about the playoffs,” Burrow said. “I said the easiest way to do that is win the division. They kind of laughed at us, but we knew the team we had.”

One that includes his college buddy Ja'Marr Chase from LSU, whom the Bengals were able to draft at No. 5 after Burrow's injury led to a 4-11-1 finish in 2020.

Chase caught 11 passes for an NFL rookie record 266 yards and three touchdowns Sunday, which led NBC analyst Tony Dungy to muse that the Chiefs “were lining up play after play after play with man coverage, no help, bump and run on those wide guys. It didn't make sense.”

The Bengals are back, and they have the makings to end three decades of playoff futility, too.

And a third-year head coach who's as bold and aggressive as any offensive play caller in the league.