No damage or casualties were reported from the attack, the third in as many days since Monday's anniversary of a U.S. airstrike that killed top Iranian general Qassim Soleimani in Baghdad two years ago.

The Iraqi military statement said a rocket launcher with one rocket was located in a residential district in western Baghdad. The area has been used in the past by Iran-backed militias to fire rockets at the airport. 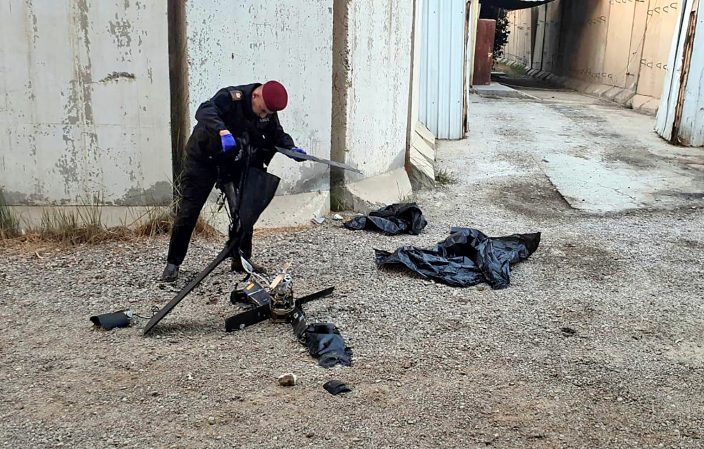 A security official inspects the wreckage of a drone at Baghdad airport, Iraq, Monday, Jan. 3, 2022. Two armed drones were shot down at the Baghdad airport on Monday, a U.S.-led coalition official said, an attack that coincides with the anniversary of the 2020 U.S. killing of a top Iranian general. (International Coalition via AP)

On Monday, two armed drones were shot down as they headed toward a facility housing U.S. advisors at Baghdad airport. Two explosives-laden drones targeting an Iraqi military base housing U.S. troops in western Anbar province were destroyed on Tuesday.

Pro-Iran Shiite factions in Iraq have vowed revenge for the killing and have conditioned the end of attacks against the U.S. presence in Iraq on the full exit of American troops from the country.

The top U.S. commander for the Middle East Marine Gen. Frank McKenzie warned in an interview with the Associated Press last month that he expects increasing attacks on U.S. and Iraqi personnel by Iranian-backed militias determined to get American forces out.