While Bundesliga players enjoyed their winter break, the coronavirus took none.

The German league will resume in a depleted state on Friday, when defending champion Bayern Munich will struggle to field a competitive starting lineup against Borussia Mönchengladbach — a team that trounced Bayern 5-0 when they last met in the German Cup in October.

But Gladbach will be depleted, too. Joe Scally, Mamadou Doucouré, Denis Zakaria and Keanan Bennetts were all in quarantine this week after testing positive for COVID-19. 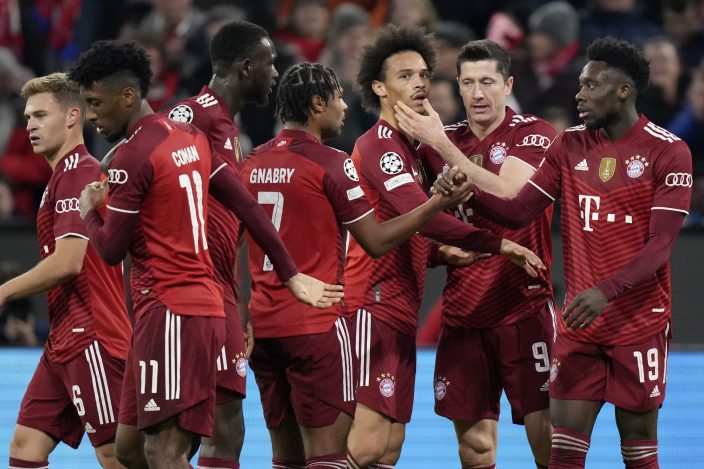 Bayern had nine players as well as assistant coach Dino Toppmöller in quarantine this week because of coronavirus infections.

Bayern captain Manuel Neuer and defender Lucas Hernández were infected while on vacation in the Maldives, Kingsley Coman while he was in Dubai, and Corentin Tolisso while he was home in France. Alphonso Davies, Leroy Sané, Dayot Upamecano, Omar Richards and Tanguy Nianzou completed Bayern’s infected list.

With Bouna Sarr and Eric-Maxim Choupo-Moting away at the African Cup, Bayern coach Julian Nagelsmann only had 12 outfield players for Friday’s game, as well as goalkeepers Sven Ulreich und Christian Früchtl. Of those 12, Leon Goretzka, Niklas Süle and Serge Gnabry had injury concerns.

Under new rules agreed to by the clubs at the start of the pandemic, the German soccer league can approve a request to call off a Bundesliga game if one of the teams has fewer than 15 available players, including at least one goalkeeper.

Bayern sporting director Hasan Salihamidžić acknowledged Wednesday that the club was hoping to postpone Friday’s game, but the league favors going ahead with it.

“It looks like we’re going to play, and then we’ll also go into the game to win it,” Salihamidžić said.

Bavarian governor Markus Söder — himself a Bayern fan — also appealed for the game to be postponed in the interest of “fair competition.”

Despite the coronavirus outbreak, Bayern leads the Bundesliga by nine points at the halfway stage and is favored to wrap up a record-extending 10th consecutive title.

Nagelsmann called up 16-year-olds Arijon Ibrahimovic and Paul Wanner to help cover the absences. If either make their debut against Gladbach, they will take over from Jamal Musiala as the club’s youngest player to appear in the Bundesliga.

Borussia Dortmund was also left ruing the winter break as both Dan-Axel Zagadou and Marius Wolf returned from vacation — in Dubai and Austria, respectively — with coronavirus infections.

“It’s not so simple at the moment, there’s a certain uncertainty affecting us all,” Dortmund team coordinator Sebastian Kehl said. “Regardless of where you are, you can’t protect yourself fully from the (omicron) variant, whether on vacation far away or here in front of the house door.”

Leipzig said Tuesday that Nordi Mukiele, Benjamin Henrichs and Dani Olmo were all infected, joining Christopher Nkunku and Solomon Bonnah in quarantine. Leipzig is scheduled to host Mainz on Saturday.

Mainz was one of only five Bundesliga clubs that escaped from the winter break without reporting any positive test results for the coronavirus. Freiburg, Cologne, Hoffenheim and Arminia Bielefeld were the others.

Hertha Berlin was struggling to find defenders for its game Sunday at home against Cologne as Linus Gechter became its fourth to test positive for COVID-19, including new signing Fredrik André Björkan.

While Dedryck Boyata and Deyovaisio Zeefuik were able to return to training after negative test results on Wednesday, Santiago Ascacíbar and Lucas Tousart returned positive results and had to go into quarantine.

Stuttgart had four players in isolation ahead of its visit to last-place Greuther Fürth on Saturday: Silas Katompa Mvumpa, Naouirou Ahamada, Konstantinos Mavropanos and Mateo Klimowicz.