Israeli forces shot and killed a Palestinian who had opened fire on them during an arrest raid in the occupied West Bank city of Nablus early Thursday, the Israeli military said.

The military said it was carrying out an operation to arrest a suspect when armed men began firing on the troops. It said forces killed one of the gunmen. No soldiers were wounded and the suspect was arrested, the military said.

The official Palestinian news agency, Wafa, identified the man as Bakir Muhammad Musa Hashash, 21, saying he was critically wounded in clashes with the military and later died. 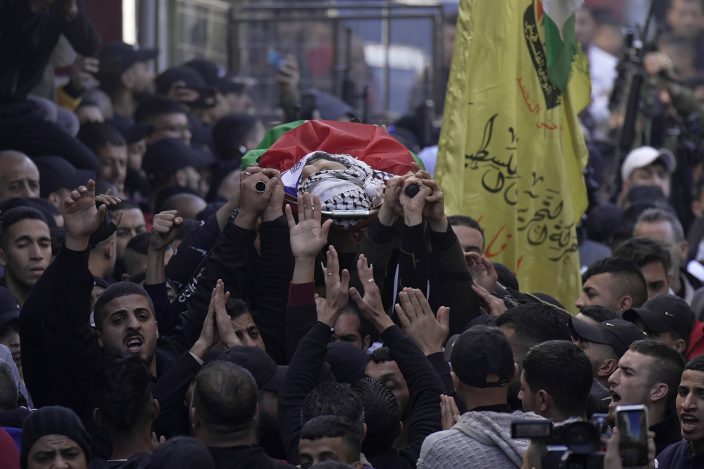 Palestinian mourners carry the body of Bakir Muhammad Musa Hashash, 21, who was killed by Israeli fire, during his funeral in Balata refugee camp near the West Bank town of Nablus, Thursday, Jan. 6, 2022. The Israeli military said its forces shot and killed Hashash, a Palestinian who had opened fire on them during an arrest raid in the West Bank early Thursday. (AP PhotoMajdi Mohammed)

The clashes come amid a spike in Israeli-Palestinian violence in recent weeks.

Last month, a Palestinian gunman opened fire on a car filled with Jewish seminary students next to a West Bank settlement outpost. Yehuda Dimentman, 25, was killed and two others were wounded near Homesh, which is considered illegal by the Israeli government.

Also last month, a Palestinian attacker stabbed and seriously wounded an ultra-Orthodox Jew outside Jerusalem’s Old City. And just over a week before that, a Hamas militant opened fire in the Old City, killing an Israeli man.

At the same time, settler violence against Palestinians has risen, particularly in the northern West Bank.

Israel captured east Jerusalem and the West Bank in the 1967 Mideast war, and the territories are now home to over 700,000 Israel settlers. Most of the international community considers Israeli settlements illegal and obstacles to peace.

The Palestinians seek east Jerusalem and the West Bank as parts of a future independent state, along with the Gaza Strip, which Israel withdrew from in 2005.