A men’s World Cup slalom race was stopped Thursday after 19 skiers started on a course that was muddy rather than white with snow.

In warm temperatures, the Crveni Spust course was hosting its second race in three days. Some skiers trailed more than three seconds behind leader Sebastian Foss-Solevaag on the fast-softening snow.

“These are no World Cup conditions,” two-time World Cup slalom champion Henrik Kristoffersen said after his run. “It is dangerous in some parts. Marco (Schwarz) and Loïc (Meillard) said the grass is coming through. For the spectators, I think, it looks weird.” 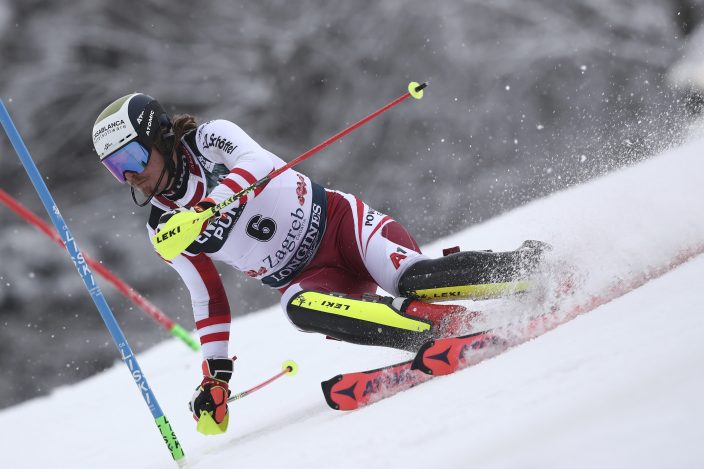 The International Ski Federation said the race was stopped because of “the unfavorable conditions and in the best interest of safety and fairness.”

Organizers allowed the race to start even though they consulted with skiers on Wednesday when the previously scheduled race was postponed by a day.

“It’s weird they have to ask the athletes,” said Kristoffersen, adding that only half the top-ranked slalom racers wanted to start. "I think FIS needs to have enough knowledge to know how things are for a ski racer, for a coach, when you decide whether it is good enough to race or not.”

Veteran downhill racer Johan Clarey posted on Twitter: “Hey @fisalpine, are you still the boss in your own worldcup tour?”

The same course hosted a women’s slalom on Tuesday, won by Slovakian standout Petra Vlhova, though creating a fair racing surface then might have been at the cost of having a subsequent race.

“If the women hadn’t raced two days ago, then maybe we would’ve had a chance,” Kristoffersen said. “But they worked with salt too much. The snow is completely dead, it’s unstable, it’s weak.”

Men’s slalom racers will get another chance on Sunday in Adelboden, Switzerland. The classic giant slalom at the resort is set for Saturday.