Consumer prices in the 19 countries that use the euro currency soared at a record rate, led by a surge in food and energy costs, figures showed Friday.

Inflation rose to 5% in December compared with a year earlier, according to Eurostat, the European Union's statistical office. That is the highest level in the eurozone since recordkeeping began in 1997, breaking the record of 4.9% only just set in November.

Energy costs spiked again in December, jumping at an annual rate of 26%, though that was a bit lower than the previous month, according to Eurostat’s data. A stronger rise in food costs contributed to the increase in overall inflation, picking up pace to 3.2%, higher than the 2.2% rate posted in November. 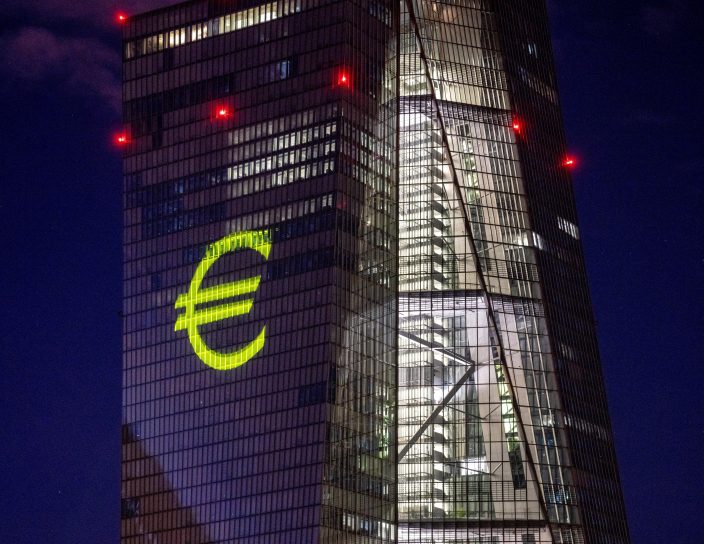 FILE A light installation is projected onto the building of the European Central Bank during a rehearsal in Frankfurt, Germany, Thursday, Dec. 30, 2021. Inflation in the 19 countries that use the euro currency hit a new high of 5.0% in December, breaking the record set the previous month. (AP PhotoMichael Probst, File)

Soaring prices are compounding problems for European Central Bank policymakers who have been keeping interest rates at ultra-low levels to stimulate the economy as it recovers from the coronavirus pandemic.

Despite the omicron variant of COVID-19 surging and its uncertain effects on the global economy, central banks elsewhere have been raising interest rates to fight soaring inflation or taking steps in that direction.

The Bank of England became the first central bank in a major advanced economy to raise interest rates since the pandemic began. The European Central Bank has taken a much more cautious approach, but also decided to start carefully dialing back some of its stimulus efforts over the next year.

The U.S. Federal Reserve is moving faster than Europe to tighten credit as consumer prices jumped 6.8% over the past year in November, the highest such inflation rate in 39 years.

Inflation in 19 countries using the euro hits another record