Brandin Echols had a feeling something special was going to happen.

The New York Jets rookie cornerback could picture it throughout practice last week: Tom Brady would throw a pass in his direction and he'd take care of the rest.

“I was like, 'Yeah, I'm going to get a pick against Tom Brady,'” Echols said. 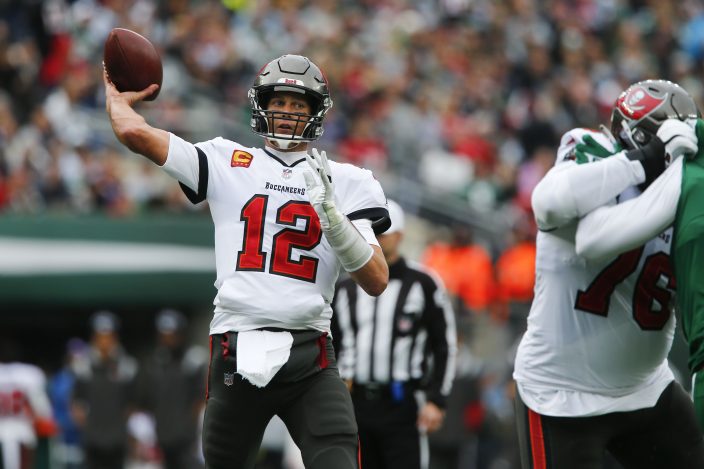 Sure enough, in the closing seconds of the first half against Tampa Bay, Echols snagged Brady's pass intended for Mike Evans and returned it 30 yards to help the Jets get a field goal.

“When it happened, I was like, ‘Yeah, I want the ball signed,’” Echols said. “I spoke it into existence and it happened. And then at the end of the game, that's when I was just like, oh yeah, get my ball and I want to get it signed.”

Echols found Brady in the middle of the MetLife Stadium field after the Jets' 28-24 loss, armed with the football he intercepted and a pen. 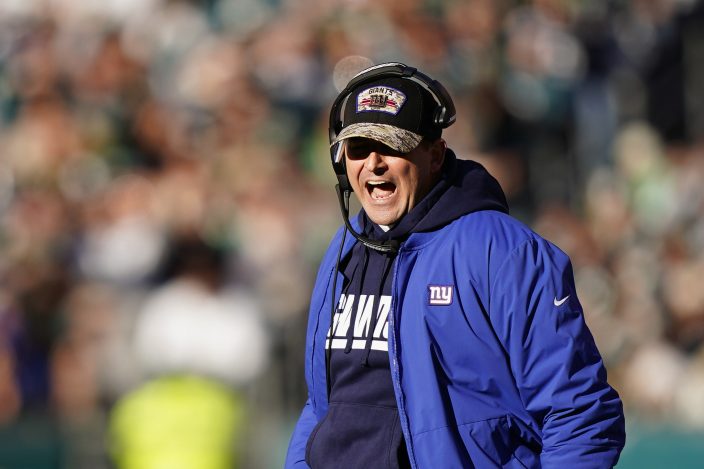 New York Giants' Joe Judge yells during the first half of an NFL football game against the Philadelphia Eagles, Sunday, Dec. 26, 2021, in Philadelphia. (AP PhotoMatt Rourke)

The seven-time Super Bowl MVP said a few brief words to Echols, a sixth-round draft pick out of Kentucky, signed the football, and the two shook hands and hugged. Fox cameras showed the exchange — and it immediately set off a debate as to whether what Echols did was perfectly OK or unprofessional.

"There most definitely could have been another way to get that done, but I was just excited to pick off Tom Brady,” Echols said Thursday. “I’ve been watching him since I started realizing what football was. So it was a big moment for me, and I was just caught up in the moment. I just felt like I needed to do it right there.”

The 24-year-old Echols was surprised at how much of a topic of conversation it became on social media and sports radio and TV shows. 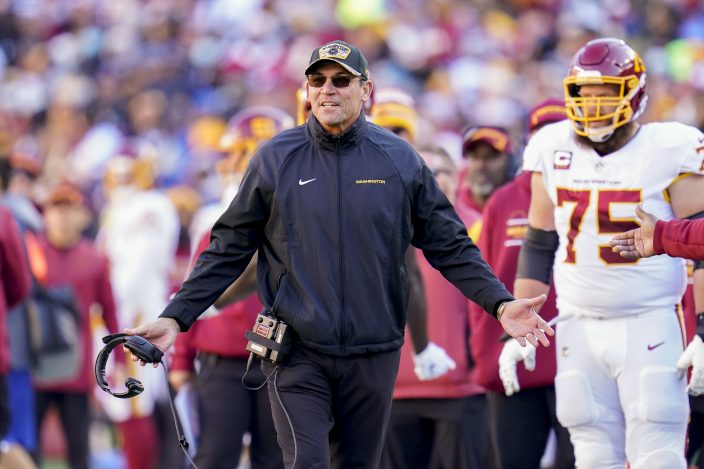 “I thought it was the same thing like getting a jersey swapped,” Echols said of a common practice between NFL players after games. “But people made it a bigger deal than it was supposed to be. It really doesn't mean anything to me because I’m the one going out doing what I’m doing every week. It’s good to just relax and live your childhood dream for once.”

Coach Robert Saleh had no issue with Echols getting his interception ball signed by Brady, even after a tough loss.

As for Brady, he called Echols “a nice guy” on his “Let's Go!” podcast with Jim Gray, adding that the rookie's unusual request “was kind of flattering."

“It’s not often I sign an interception ball,” he said. "I think it’s the first time. I don’t necessarily like signing mistakes, let me just say that. So that’s the last time I’m going to do that. I know it’s the season of giving — I don’t plan on giving any more gifts to people. It’s much better to receive than give, from my standpoint as a quarterback.”

That means Echols has a very rare piece of memorabilia to display for years to come.

NBA Hall of Famer Shaquille O’Neal is rooting for the Dallas Cowboys to play in the Super Bowl.

O’Neal, who earned three of his four championship rings with the Los Angeles Lakers, is hoping to see Dak Prescott lead America’s Team to LA for the big game next month.

“Most of the time when I meet professional athletes, it’s just a tremendous amount of mutual respect,” O’Neal said on the AP Pro Football Podcast. “What I did not take for granted as an athlete was, I said to myself if people are going to watch me play, spend money to watch me play, I have to give them a good show. Hopefully I gave them some type of enjoyment because I love watching Dak and the guys go out there and play well.”

Two days before the Super Bowl, O’Neal is throwing a big bash in Los Angeles. Shaq’s Fun House will be held in The Shrine Auditorium and Expo Hall on Feb. 11. The party features a music festival with Lil Wayne, Zedd and Diplo performing, and also a carnival.

“All the other parties are dress up, show up, be quiet,” O’Neal said. “This one is going to be fun. People will be jumping up and down. It’ll be a great time.”

It’ll be the fourth time O’Neal hosts his over-the-top event.

The Los Angeles Rams have created a college scholarship program to honor the memory of football pioneer Kenny Washington.

The Rams say the scholarship will provide four years of financial support “for students from lower resourced communities who are among the first in their families to pursue a postsecondary education.” Students who are accepted to four-year schools will receive $5,000 per year for up to four years, and students at community colleges will get $2,000 a year for two years.

Washington broke the NFL’s color barrier in 1946 when the Los Angeles native and UCLA product signed with the Rams, ending a 12-year absence of Black players from the NFL. Washington graduated from UCLA in 1940, but was initially prohibited from joining the league despite George Halas’ desire to sign him for the Chicago Bears.

Washington joined the LAPD and also played in a West Coast minor league for six years before the Rams arrived in Los Angeles from Cleveland. Under intense local pressure to integrate their roster as part of the move, the Rams signed the 27-year-old Washington and then Woody Strode. Although his knees were already damaged from a life in football, Washington had three productive years and made a 92-yard touchdown run that still stands as the longest in franchise history.

The Philadelphia Eagles launched an anti-gun violence campaign in conjunction with area-based nonprofits and the city this week.

There were 562 homicides in Philadelphia in 2021 — a 13% increase from 2020 — surpassing a city record for annual homicides dating to at least 1960. The Eagles Social Justice Fund of the Philadelphia Foundation awarded $316,600 in grants to 32 Philadelphia nonprofits committed to serving the region through specialized social justice work.

“End Philly gun violence is part of the NFL’s Inspire Change platform,” Eagles president Don Smolenski said on the AP Pro Football Podcast. “Our players, they don’t just play here. They work here and they live here. Their families are here. They’re embedded in the community. And, like all of us in 2021, just hearing about, reading about, seeing the loss of life and the number of shootings and homicides in the city of Philadelphia, it affects us and we’re aware of what’s going on in the community.

"So when the players came back at training camp and the Social Justice Committee started to get together with new members, it was sort of a natural conversation between this is an opportunity for the team and players really to collaborate, to really build out something starting in July or August and really carrying that through the season, through Community Mondays, and leading into Inspire Change platform here in Week 17 and 18.

RUNNING OFF AT THE MOUTH

New York Giants coach Joe Judge has a habit of sometimes giving long answers, and last weekend he may have said a little too much after a loss to Chicago.

In discussing the progress of his team near the end of his second season, Judge said he believes the foundation for success has been laid. The Giants are playing hard despite a 4-12 record and they are not pointing fingers.

“So this ain’t a team that’s having fistfights on the sidelines,” Judge said late in his 11-minute answer. “This ain’t some clown show organization or something else.”

Oops. That was the problem.

The Giants finish the season Sunday against Washington — and during Dallas’ 56-14 win on Dec. 26, Washington defensive linemen Jonathan Allen and Daron Payne got into a fight in the second quarter on the sideline.

Judge insists he was not talking about Washington.

Washington coach Ron Rivera said he had a lot of respect for the Giants organization, but said little about Judge’s comment.

“One thing that I tell our guys is let’s pay attention to what’s important, not what’s interesting," Rivera said. “To me, that’s an interesting comment.”

An NFL sanctioned combine for players from Historically Black Colleges and Universities will be held Jan. 28-29 at the University of South Alabama in Mobile, Alabama.

This is the second straight year CBS’ top team has had COVID issues before the final week of the regular season. Boomer Esiason had to step in for Tony Romo before the Arizona Cardinals-Los Angeles Rams game last year.

NFL Notes: Pro Bowl is all in the family for Diggs brothers