While the Rams shook hands with the San Francisco 49ers down on the field Sunday, a celebratory graphic blared from the massive Oculus videoboard above them. Virtual confetti flew while SoFi Stadium heralded Los Angeles as the "NFC West Division Champs.”

A few moments after the Rams' heartbreaking sixth consecutive loss to their archrivals sure didn't seem like the time or the place for a celebration.

The Rams' 27-24 overtime defeat sent them into the playoffs on a demoralizing down note, even if Arizona's equally dismaying home loss to Seattle allowed Los Angeles to stumble into another division title. 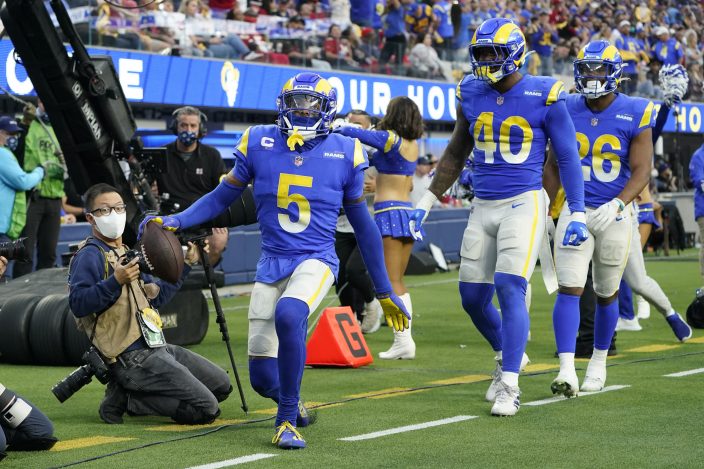 “You’ve got to finish," Rams coach Sean McVay said. "Our guys came out ready to go, but you’ve got to play four quarters — or five quarters in this instance. ... Fortunately, this isn’t the end for us.”

Indeed, the fourth-seeded Rams (12-5) have an opportunity to erase this particularly sour ending to McVay's fifth regular season.

They're hosting the first playoff game in SoFi history on Monday night against the Cardinals (11-6), whose late-season disappointment with their 1-4 finish is exponentially worse.

But the Rams have already lost to Arizona once in Inglewood this season, and they've got plenty of areas to improve if they hope to avoid an opening-round exit.

Los Angeles got dominated on both lines of scrimmage by the 49ers, who outgained the Rams 449-265. San Francisco held the Rams to 64 yards rushing and sacked Matthew Stafford five times, while its offense capitalized on Los Angeles' poor tackling to make six lengthy drives after a slow start.

Even getting to overtime flattered this weak performance by the Rams, who realize they didn't look like a Super Bowl contender with the division title on the line.

They remain confident that they're as good as they looked in most of their 12 victories, and not as bad as they looked twice against San Francisco — or against No. 1 seeds Green Bay and Tennessee, which both blew out the Rams in the regular season.

“Right now, it’s testing us,” Stafford said. "We lost the football game that we had chances to win. We would have felt great winning that game and winning the division the way we wanted to win the division. But we’re a resilient group, and we’ll be ready to go.”

The Rams have the most effective receiver in the sport after Cooper Kupp completed his historic season by becoming the fourth player in NFL history to lead the league in receptions (145), yards receiving (1,947) and touchdown catches (16). Arizona held Kupp to a season-low five catches in the Cardinals' win in Inglewood, but he rebounded with a season-high 13 catches in the Rams' rematch victory in Glendale. LA's passing game was effective against San Francisco even while the running game was nonexistent.

The Rams' defense finished 17th in the NFL in total yards allowed after being No. 1 in the league last season. LA just doesn't scare good offenses, even though Aaron Donald, Jalen Ramsey and Von Miller are all playing well. Their supporting cast misses tackles (a season-high 19 against the Niners, according to Pro Football Focus), doesn't adjust on the fly and simply doesn't have the talent to avoid being exploited by clever coaches and quarterbacks. Even if the Rams can outscore Kyler Murray, it's hard to see how Aaron Rodgers or Tom Brady won't chew them up.

Tight end Tyler Higbee was a difference-maker in his two-touchdown performance, finishing with six catches for 55 yards. Giving him a prominent role in the offense makes Stafford and Kupp even more dangerous.

The Rams' offensive line got bossed around in the biggest game of the season. San Francisco dominated up front, pressuring Stafford constantly (22 times, according to PFF) and recording eight tackles behind the line of scrimmage.

Leading tackler Jordan Fuller left in the fourth quarter with an apparent right ankle injury. His absence could be crushing for a secondary already relying heavily on him and Ramsey while Darious Williams, Dont'e Deayon, Nick Scott and David Long all struggle.

8 — Stafford's total touchdown passes and total interceptions over the last four games. His 41 TD passes in this 17-game season matched his career high, but his 17 picks were his most since 2013.

The Rams beat Arizona in December with decisive big plays on offense and defense even while Murray's group racked up 447 total yards. Los Angeles probably will need to put up big numbers again to knock off Arizona, which hasn't allowed fewer than 22 points since mid-November.