The Las Vegas Raiders could’ve punched their ticket to the postseason — and given the Chargers a spot — by taking a knee on the final play Sunday night.

It looked like they might have been willing to settle for the tie when they ran the ball on second down from the Chargers 46 as the clock ticked under a minute in overtime Sunday night. 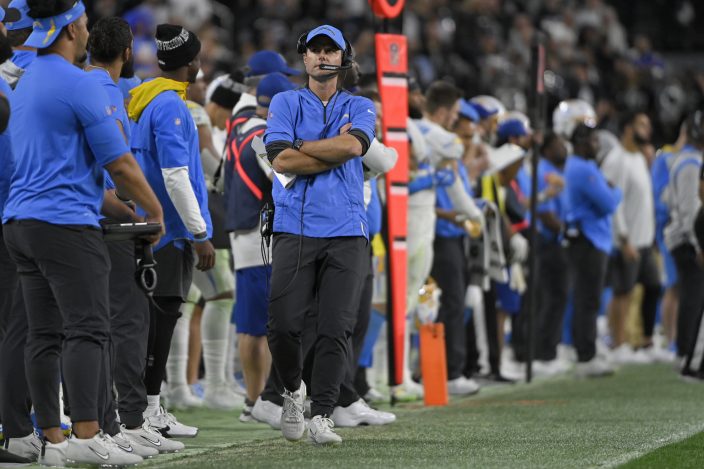 Los Angeles Chargers head coach Brandon Staley walks along the sideline during the second half of an NFL football game against the Las Vegas Raiders, Sunday, Jan. 9, 2022, in Las Vegas. (AP PhotoDavid Becker)

With 39 seconds remaining in the game and four seconds left on the play clock, Chargers first-year head coach Brandon Staley called a timeout that stunned the broadcast crew of Al Michaels and Cris Collinsworth.

Staley said afterward that he wanted to get the proper personnel on the field to defend the run and keep the Raiders either out of field goal range or make it a lot longer of an attempt for Daniel Carlson, who kicked a career-long 56-yarder earlier in the regular season.

Had the Chargers stuffed Jacobs for no gain, the field goal attempt would have been a 57-yarder, at the edge of Carlson's range, even indoors. 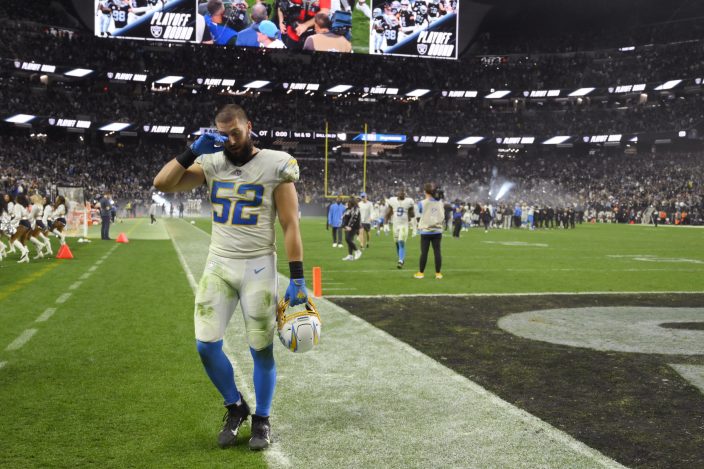 “We needed to get in the right grouping,” Staley said after the game. “We felt they were going to run the ball. We wanted to get our run defense in. (We made) that substitution so we could get a play that would deepen that field goal.”

Staley's strategy backfired, however, when running back Josh Jacobs darted for 10 yards on third-and-4 to the Chargers 29, putting Carlson and the Raiders in solid field goal range for a kicker who was a remarkable 40 of 43 this season.

“We popped the run in there and gave us a chance to kick the field goal and win it,” Raiders coach Rich Bisaccia said. “We were certainly talking about" the tie, but then "we had the big run. When we had the big run, it got us to what we thought was advantageous field-goal position for us. We were going to take the field goal to win it.” 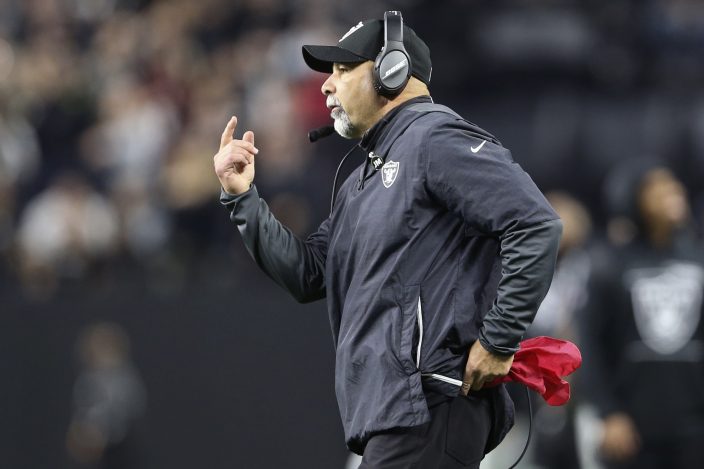 Staley didn't bother using another timeout to ice Carlson, who nailed the 47-yard field goal as time expired in overtime for a 35-32 Raiders win that eliminated the Chargers and sent soon-to-retire Ben Roethlisberger and the Steelers to the playoffs with them instead.

“It definitely did, obviously,” Raiders quarterback Derek Carr said in his post-game interview when NBC’s Michelle Tafoya asked if the Chargers' timeout changed the Raiders' strategy. “But we knew, no matter what, we didn’t want a tie. We wanted to win the football game.

“Obviously, if you tie, you're in and all of those things. But my mindset all day — I even was texting with Aaron Rodgers this morning — my mindset was to make sure that we were the only team moving on after this,” Carr said.

One reason the Raiders are glad they didn't settle for the sure thing of a tie and eliminate any chance, no matter how small, of a goof-up — a bad snap, a block, a return — was that Las Vegas would have earned the seventh seed had the thrilling Week 18 finale ended in an improbable tie.

It would have been just the second tie in the NFL's 272 regular season games and it would have meant a Raiders trip to Kansas City (12-5) on wild card weekend instead of to Cincinnati (10-7).

Las Vegas was trounced twice this season by the second-seeded Chiefs — and by a combined score of 89-23. (The Raiders also lost 32-13 to the fourth-seeded Bengals at home on Nov. 21).

Las Vegas' last loss was a 48-9 debacle at Arrowhead Stadium on Dec. 12 that left the Raiders reeling at 6-7 following their fifth loss in six games.

They followed that blowout loss, however, with wins over the Browns, Broncos, Colts and Chargers by a combined 12 points to become the first team in half a century to make the playoffs after a midseason coaching change. Bisaccia took over when Jon Gruden resigned in disgrace in early October after a series of offensive emails sent by him became public.

Carr is heading to the first playoff appearance of his eight-year career. He was hurt in 2016 when the Raiders last made the postseason.

Staley said during the week that he wouldn't play for the tie just to ensure a playoff berth if the Raiders and Chargers found themselves in that position, which necessitated a Colts' loss and a Steelers' win earlier Sunday, both of which happened.

Although it appeared Bisaccia was willing to play for that tie in the end, Staley wasn't buying it.

Staley's players had his back.

“They are going to kick the field goal regardless,” said end Justin Jones, who played all 80 of the Chargers' defensive snaps. “I don't see our division rivals trying to end in a tie. That storyline doesn't make sense whatsoever.”

“We didn’t have all of our guys ready and set, the package that we wanted,” James said. "They could have snapped the ball and gotten an easy first down. We needed to be ready.”

Star linebacker Joey Bosa didn't even realize it was his own team that called the timeout.

“I mean, I was a little oblivious to what was going on. I was dead tired out there, just grinding and trying to do my best to stop them,” he said. "The coaches are going to do what they do and that’s out of our control. ... I guess I thought that they called the timeout. I wasn’t really exactly sure. My main thought was keep them out of field goal range and that was it.”

Staley stuck by his decision to stop the clock.

“My mindset," he said, "was to make the field goal as long as possible.”

It didn't work out as he envisioned and instead of a trip to the playoffs, the Chargers headed home and into an interminable offseason with so many what-ifs hanging over them like the L.A. smog.