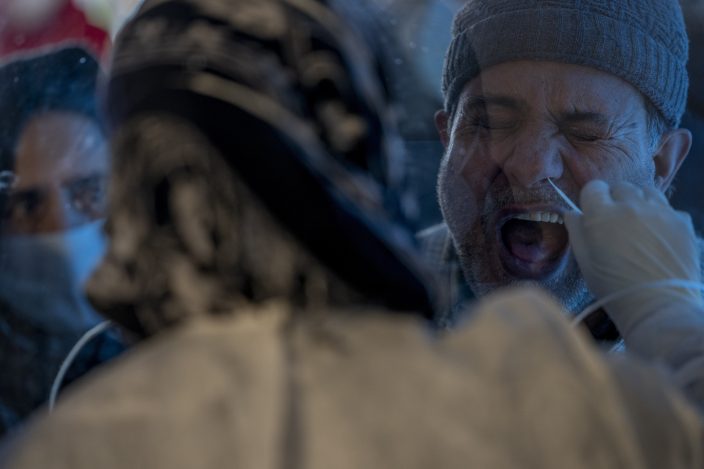 A man reacts as a health worker takes a nasal swab sample to test for COVID-19 in Srinagar, Indian controlled Kashmir, Saturday, Jan. 15, 2022. Authorities in the Indian portion of Kashmir announced complete restriction on non-essential movement during weekends in the entire state to curb the spread of the coronavirus. (AP PhotoDar Yasin)

The AP is offering some ways to localize reporting regarding how the energy grid is changing and what that will mean, along with summaries of the energy policies for all 50 U.S. states and the District of Columbia. Find the Localize It guide here.

VIRUS-OUTBREAK-NEW-VARIANTS — Scientists warn that omicron’s whirlwind spread across the globe practically ensures it won’t be the last worrisome coronavirus variant. Every infection provides a chance for the virus to mutate, and research shows that omicron is at least twice as contagious as delta and at least four times as contagious as the original version of the virus. That means more people in whom the virus can further evolve. Experts don’t know how the next variants might shape the pandemic, and they say there’s no guarantee the sequels of omicron will cause milder illness or that existing vaccines will work against them. By Laura Ungar. SENT: 1,035 words, photos. Eds: This story has moved as the Sunday Spotlight.

TONGA VOLCANO-ERUPTION — An undersea volcano erupted in spectacular fashion near the Pacific nation of Tonga, sending large tsunami waves crashing across the shore and people rushing to higher ground. A tsunami advisory was in effect for Hawaii, Alaska and the U.S. Pacific coast, with reports of waves pushing boats up in the docks in Hawaii. By Nick Perry. SENT: 1,105 words, photos.

BIDEN-ONE YEAR-POLITICS — Just over a year ago, millions of energized young people, women, voters of color and independents joined forces to send Joe Biden to the White House. But 12 months after he entered the Oval Office, many describe a coalition in crisis. By National Politics Writer Steve Peoples. SENT: 1,410 words, photos.

BIDEN-ONE-YEAR-EMHOFF — As America’s first second gentleman, Doug Emhoff has visited 31 states to promote Biden administration policies and the coronavirus vaccine. He says the most important part of those trips may be making it home in time for dinner, when his wife, Vice President Kamala Harris, asks about his day. In an interview with The Associated Press, Emhoff says such conversations with Harris about the people he’s met and their challenges can lead to a government response. By Will Weissert and Darlene Superville. SENT: 1,080 words, photos.

CAPITOL-RIOT-SEDITIOUS-CONSPIRACY — The seditious conspiracy case against members and associates of the far-right Oath Keepers militia group marks the boldest attempt so far by the government to prosecute those who attacked the U.S. Capitol, but invoking the rarely used charge carries considerable risks. Still, legal experts who have reviewed the indictment unsealed this past week against Oath Keepers founder Stewart Rhodes and 10 others said prosecutors stand a good chance of winning convictions. By Jacques Billeaud and Michael Kunelman. SENT: 975 words, photos.

ELECTION 2022-REPUBLICANS — Former President Donald Trump is stepping up his election-year effort to dominate the Republican Party with a rally in Arizona. But 2,000 miles to the east in Washington, there are small signs that some Republicans are tiring of his lie that the 2020 presidential election was stolen. By Jill Colvin. SENT: 1,060 words, photos.

BRITAIN-PRINCE-ANDREW — Lawyers for Prince Andrew and his accuser Virginia Giuffre have filed their initial requests for witnesses in her lawsuit accusing the British royal of sexually abusing her at age 17. SENT: 385 words, photos.

PROP FIREARM SHOOTING — Alec Baldwin has surrendered his cellphone as part of the investigation into a fatal shooting on a New Mexico film set last fall. SENT: 320 words, photo.

CHEMICAL-PLANT-FIRE — A large chemical fire burned through the night and into Saturday morning in northern New Jersey, its smoke so heavy that it was detected on weather radar and seen and smelled in neighboring New York City. SENT: 225 words, photos.

NETHERLANDS-TULIPS-FOR-AMSTERDAM -- As stores in Amsterdam and across the Netherlands cautiously reopened after weeks of being under a coronavirus lockdown, the Dutch capital’s mood was lightened further Saturday by dashes of color from thousands of free bunches of tulips being handed out. SENT: 190 words, photos.

VIRUS-OUTBREAK-DIGITAL-DIVIDE -- Philanthropy, federal relief funding and other community driven efforts to close the digital divide in a year of remote schooling have helped significantly to bring more children online. But many families remain underconnected. They find themselves able to access the internet and the increasing number of tasks that rely on it with only sporadic success. Experts say many factors at every step of the way shape whether a family can meaningful connect to the digital world. They include everything from device access to internet bandwidth to financial stability. SENT: 975 words, photos.

VIRUS OUTBREAK-CALIFORNIA-EQUIPMENT DAMAGED — About $7 million worth of surplus personal protective equipment and cleaning supplies, purchased by a Northern California county earlier in the coronavirus pandemic, was damaged in recent rainstorms after it was left outside for months, officials say. SENT: 280 words.

OLY-BEIJING-EXPLAINER-ZERO-COVID — Athletes will need to be vaccinated and tested daily at the Winter Olympics in Beijing next month. Clapping is OK to cheer on teammates — but not chanting. Anyone who tests positive for COVID-19 will be sent into isolation and unable to compete until cleared for discharge. Those are among the measures Beijing organizers are imposing to create a virus-proof bubble for thousands of international visitors at a time when omicron is fueling infections globally. SENT: 970 words, photos.

UNITED-STATES-RUSSIA — The failure of last week’s high-stakes diplomatic meetings to resolve escalating tensions over Ukraine has put Russia, the United States and its European allies in uncharted post-Cold War territory. It is posing significant challenges for the main players to avoid an outright and potentially disastrous confrontation. SENT: 1,040 words, photos.

VIRGINIA-GOVERNOR — A weekend of pomp and circumstance is underway in Richmond as Virginia’s newly elected Republican leaders are set to take office. Gov.-elect Glenn Youngkin, Attorney General-elect Jason Miyares and Lieutenant Gov.-elect Winsome Earle-Sears will be sworn in during an outdoor ceremony in front of the historic state Capitol. SENT: 315 words, photos.

2020-CENSUS-CHALLENGES -- The U.S. Census Bureau has begun accepting challenges from states, cities and tribal nations that want to contest the results of the 2020 census. SENT: 835 words, photos.

MLK-DAY-ARIZONA — Some relatives of the late Rev. Martin Luther King Jr. are spending the holiday named for him in conservative-leaning Arizona to mobilize support for languishing federal voting rights legislation. SENT: 665 words, photos.

WINTER WEATHER — Forecasts of snow and ice as far south as Georgia have put much of the Southeast on an emergency preparedness footing as shoppers strip store shelves of supplies and road crews treat highways ahead of an approaching weekend storm. In Virginia, where a blizzard left thousands of motorists trapped on clogged highways earlier this month, outgoing Gov. Ralph Northam declared a state of emergency. Counterparts in the Carolinas and Georgia did likewise. SENT: 905 words, photos.

NYC-MAYOR-FIRST-WEEKS — Eric Adams has stepped into the roles of cheerleader and crisis manager in his first weeks as New York City mayor while facing questions about early controversies of his own making. His early days on the job may foreshadow that the Adams era of New York City is shaping up much like the man. It’s fast-paced, at times contradictory and hard to pin down. SENT: 895 words, photos.

ROBERT DURST-ESTATE FIGHT — A quest for the fortune left behind by multimillionaire murderer Robert Durst is underway just days after his death. SENT: 980 words, photos.

KAZAKHSTAN-PROTESTERS — The mass protests in Kazakhstan began peacefully over the New Year’s weekend, with marchers denouncing a sharp rise in fuel prices. They spread quickly from the western part of the Central Asian nation to more populous areas, eventually reaching its largest city of Almaty. But something changed over the course of a week. SENT: 1,010 words, photos. WITH: KAZAKHSTAN-PROTESTS —A top law-enforcement official in Kazakhstan said that 225 people died during the violent demonstrations that shook the country this month. SENT: 175 words, photo.

MEXICO-CRIME — The leader of a crime gang notorious for siphoning gasoline from government fuel ducts has been sentenced to 60 years in prison for kidnapping, according to authorities in the central Mexico state of Guanajuato. José Antonio Yépez Ortiz had been one of Mexico’s most wanted suspects prior to his arrest on Aug. 2, 2020, following a shootout with police. SENT: 360 words, photos.

DAVOS-FORUM-WHAT-TO-WATCH — The coronavirus pandemic has forced the World Economic Forum’s annual meeting of world leaders, business executives and other heavyweights to go virtual for the second year in a row, but organizers still hope to catapult the world into thinking about the future with a scaled-down online version this week. SENT: 750 words, photos.

JAPAN-STABBING — Three people, including two students on their way to take university entrance exams, were stabbed just outside of a test venue, and authorities arrested a 17-year-old student at the scene on suspicion of attempted murder, Tokyo police say. SENT: 330 words, photos.

CLIMATE-CHANGE-STATE-SPENDING — Governors and state lawmakers are prioritizing climate change as they write their state budgets, devoting money to lowering emissions and guarding against natural disasters such as flood and fire. The spending comes as most states are flush with cash: Tax collections have exceeded expectations, and states are receiving billions of dollars in federal pandemic aid and infrastructure spending. SENT: 1,190 words, photos.

TEN-AUSTRALIAN-OPEN-DJOKOVIC — Novak Djokovic was back in immigration detention Saturday after his legal challenge to avoid being deported from Australia for being unvaccinated for COVID-19 was moved to higher court. A Federal Court hearing has been scheduled for Sunday, a day before the men’s No. 1-ranked tennis player and nine-time Australian Open champion was due to begin his title defense at the first Grand Slam tennis tournament of the year. SENT: 1,060 words, photos. WITH: TEN-AUSTRALIAN-OPEN-DJOKOVIC-PROFILE —Rising above reality: How Djokovic bends his mind to succeed. SENT: 1,505 words, photos. WITH: TEN—AUSTRALIAN OPEN — Rafael Nadal spoke for many in the world of tennis when he said this about long-time rival Novak Djokovic’s will-he-or-won’t-he-play saga ahead of the Australian Open: “Honestly, I’m little bit tired of the situation.” SENT: 850 words, photos.

FBN-PATRIOTS-BILLS — With temperatures projected to be near zero, the AFC East champion Buffalo Bills host their division rival New England Patriots in a wild-card playoff on Saturday night. The teams split their season series and meet for the third time in seven weeks. UPCOMING: 800 words, photos. Game starts at 8:15 p.m.