What mostly was a tense game between teams with long playoff droughts was disrupted Saturday by some problematic officiating.

The Bengals beat the Raiders 26-19 in an AFC wild-card matchup that ended Cincinnati's 31-year run without a postseason victory. The margin was Joe Burrow's 10-yard touchdown pass to Tyler Boyd late in the second quarter on which the quarterback barely was in bounds when he threw the ball.

But an official right at the sideline where Burrow threw appeared to blow his whistle while the ball was in the air. Players on the field for the Raiders, who haven't won a playoff game since taking the 2002 AFC championship, protested a bit — to no avail. 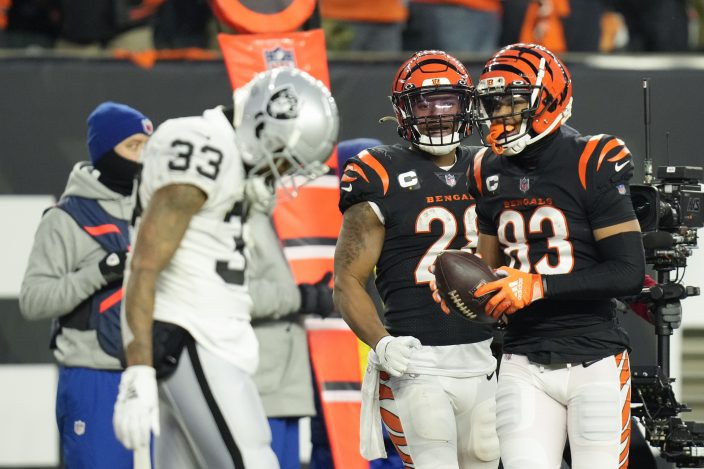 Cincinnati Bengals' Tyler Boyd (83) and Joe Mixon (28) react to a touchdown by Boyd in front of Las Vegas Raiders' Roderic Teamer (33) during the first half of an NFL wild-card playoff football game, Saturday, Jan. 15, 2022, in Cincinnati. (AP PhotoAJ Mast)

Walt Anderson, the NFL's senior vice president of officiating and a former referee, spoke to a pool reporter about the decision made by Jerome Boger's crew.

NBC's telecast replays indicated the whistle was blown early. The network's officiating analyst, Terry McAulay, believed the play should have been negated and the ball placed back at the Raiders 10.

Raiders interim coach Rich Bisaccia noted that “a lot of things went both ways” with the officials.

“I have enough problem doing my job, I can't do the officiating, too,” he said. “I didn't really talk to them about it at that time and didn't get an explanation.”

All scoring replays are reviewed. And because the play came in the final two minutes of the half, there couldn't have been any challenges, anyway.

That was the most noteworthy incident involving officiating, though Boger's crew had several lengthy discussions before making some calls, at times appearing confused.

But neither team seemed particularly upset after the game.